8 Historic Symbols That Mean The Opposite of What You Think 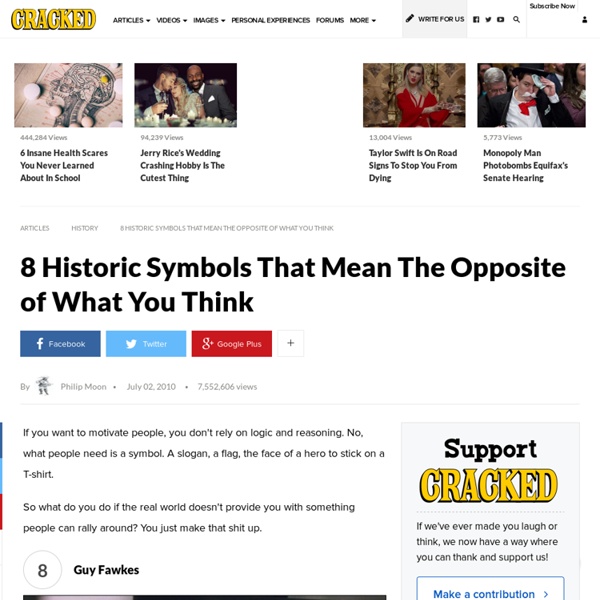 Misunderstood By: Libertarians, Glenn Beck. Glenn Beck has recently found a soul mate in Thomas Paine, the Founding Father known for his Revolutionary War tract Common Sense. Libertarians and tea partiers are so enamored by their new ideological BFF that they've taken to dressing up like him on YouTube and spouting off about the evils of taxation, weak foreign policy and too many brown people. But Beck and his minions could probably benefit from actually reading some Thomas Paine. "Pay as a remission of taxes to every poor family, out of the surplus taxes, and in room of poor-rates, four pounds a year for every child under fourteen years of age." Huh, that sounds like the child tax credit created under the Balanced Budget Act of 1997, signed by. . . An entitlement paying old people to support them for not working?

5 Creepy Ways Video Games Are Trying to Get You Addicted So, the headlines say somebody else has died due to video game addiction. Yes, it's Korea again. What the hell? Look, I'm not saying video games are heroin. I totally get that the victims had other shit going on in their lives. But, half of you reading this know a World of Warcraft addict and experts say video game addiction is a thing. Oh, hell yes. #5. If you've ever been addicted to a game or known someone who was, this article is really freaking disturbing. "Each contingency is an arrangement of time, activity, and reward, and there are an infinite number of ways these elements can be combined to produce the pattern of activity you want from your players." Notice his article does not contain the words "fun" or "enjoyment." "...at this point, younger gamers will raise their arms above their head, leaving them vulnerable." His theories are based around the work of BF Skinner, who discovered you could control behavior by training subjects with simple stimulus and reward. #4. #3. See?

the free encyclopedia 6 Things From History Everyone Pictures Incorrectly It's a running theme here at Cracked that a lot of what we think we know about history has been filtered through many centuries of utter bullshit. Our image of the past is largely made up of Hollywood inventions, propaganda and uneducated guesses. So you will probably be surprised to find that... Note: We don't want to be cruel, but your life is pretty much the most boring life that could possibly exist. First off, you probably won't ever see the apocalypse, and if you do, it won't be anything like the movies have taught you. No, if you want adventure, the only reliable place to look for it is in the past -- only you've got all that shit wrong, too! The Perception: We get so busy being amazed by the Pyramids, with their massive, meticulously layered sandy golden bricks, that we forget that what we're seeing are the broken-down remnants. The Reality: What we think of today as the Pyramids are really just the exposed layers of the structural base. Pharaohs liked tacky shit?

Flash Earth - Zoom into satellite and aerial imagery of the Earth in Flash 11 Celebrities Who Were Secretly Total Badasses One of the small comforts of watching a movie is knowing that, yeah, those guys might be idols up on the big screen, but off-camera they're probably just like the rest of us: 30 pounds overweight, living in an abandoned semi-truck cab and selling weed for denture money. But every now and then, we come across actors whose real lives are even more incredible than their fake ones. Like ... If there's one thing that Han Solo is really good at, besides stupid ear-piercing decisions, it's being America's favorite aging action hero. The assumption, of course, is that in real life, Harrison Ford is nothing like the smooth operator he plays in movies, especially after we get a gander at that screaming midlife crisis of an ear hole up there. Sure you've flown a blimp Harrison Ford. The Badass: Ford is the real-world Han Solo, if Han Solo piloted helicopters, worked for free and actually liked helping people. "Look, Your Worshipfulness, a friend in need is a friend indeed." And your father.