Nanotech breakthrough: get ready for graphene 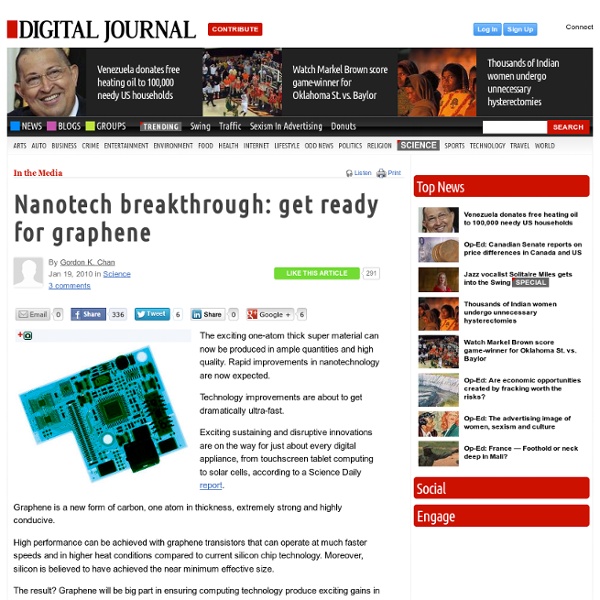 The exciting one-atom thick super material can now be produced in ample quantities and high quality. Rapid improvements in nanotechnology are now expected. Technology improvements are about to get dramatically ultra-fast. Exciting sustaining and disruptive innovations are on the way for just about every digital appliance, from touchscreen tablet computing to solar cells, according to a Science Daily report. Graphene is a new form of carbon, one atom in thickness, extremely strong and highly conducive. High performance can be achieved with graphene transistors that can operate at much faster speeds and in higher heat conditions compared to current silicon chip technology. Read more... The result?

A Robot's Body of Knowledge Photo: Humanoids and Intelligence Systems Lab/Karlsruhe Institute for Technology Click on the image for a larger view. 15 November 2010—Early risers may think it’s tough to fix breakfast first thing in the morning, but robots have it even harder. Even grabbing a cereal box is a challenge for your run-of-the-mill artificial intelligence (AI). Frosted Flakes come in a rectangular prism with colorful decorations, but so does your childhood copy of Chicken Little. Do you need to teach the AI to read before it can grab breakfast? Maybe not. The robot’s thinking is not separated from its body, because it must use its body to learn how to think. Embodied cognition also requires sophisticated two-way communication between a robot’s lower-level sensors—such as its hands and camera eyes—and its higher-level planning processor. The PACO-PLUS system’s masters tested it in a laboratory kitchen.

Teaching Robots To Interact Better With Humans The 6th annual ACM/IEEE Conference on Human-Robot Interaction just ended in Switzerland this week, and Georgia Tech is excited to share three of their presentations showcasing the latest research in how humans and robots relate to each other. Let's start from the top: How Can Robots Get Our Attention? Humans rely on lots of fairly abstract social conventions when we communicate, and most of them are things that we don't even think about, like gaze direction and body orientation. Georgia Tech is using their robot, Simon, to not just try to interact with humans in the same ways that humans interact with each other, but also to figure out how to tell when a human is directing one of these abstract social conventions at the robot. More info here. How Do People Respond to Being Touched by a Robot? This expands on previous Georgia Tech research that we've written about; the robot in the vid is Cody, our favorite sponge-bath robot. More info here. Teaching Robots to Move Like Humans More info here.

Liquid universe Public release date: 13-Oct-2004 [ Print | E-mail Share ] [ Close Window ] UK CONTACT - Claire Bowles claire.bowles@rbi.co.uk 44-207-611-1210New Scientist Press Office, London US CONTACT – Toni Marshalltoni.marshall@newscientist.com617-558-4939New Scientist Boston office The cosmos was born in a churning fluid 300 million times hotter than the sun. In QCD, it is the vacuum that imprisons the quarks. A pair of virtual particles from the vacuum are given enough energy that they become real, and fly apart in opposite directions. "There's no doubt. This makes the plasma more similar to a liquid than a gas. This is part of a Feature article that appears in New Scientist issue: 16 October 2004. [ Print | E-mail AAAS and EurekAlert!

Hans Rosling and the magic washing machine About the video What was the greatest invention of the industrial revolution? Hans Rosling makes the case for the washing machine. With newly designed graphics from Gapminder, Rosling shows us the magic that pops up when economic growth and electricity turn a boring wash day into an intellectual day of reading. More videos Hans Rosling asks: Has the UN gone mad? Hans Rosling explains a very common misunderstanding about the world: That saving the poor children leads to overpopulation. The world might not be as bad as you might believe! Hans Rosling is debunking the River of Myths about the developing world.