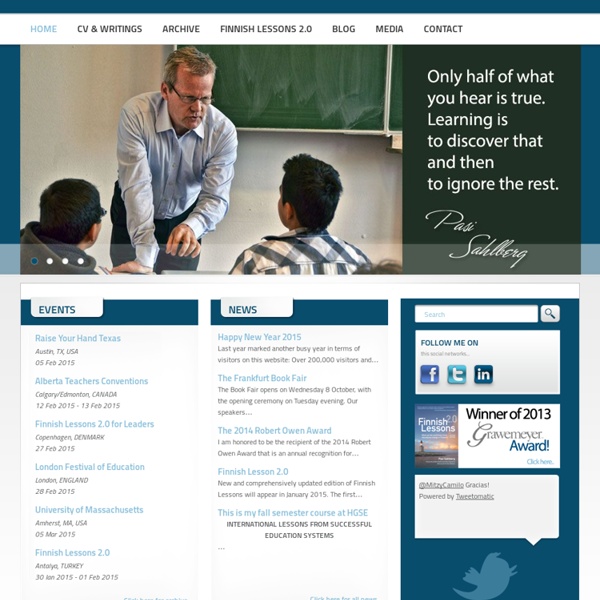 Related:  Thinking on Future of Education

English Pasi Sahlberg on Finland’s recent PISA results For years following the release of the 2001 and subsequent PISA results, edutourists visited Finland hoping to uncover their secrets. In the most recent survey, Finland's position had slipped from 2nd to 5th in reading, from 6th to 12th in mathematics and from 3rd to 5th in science. I recently talked with Pasi Sahlberg to better understand what could have contributed to this fall in the rankings. Step by Step: Designing Personalized Learning Experiences For Students The phrase “personalized learning” gets tossed around a lot in education circles. Sometimes it’s used in the context of educational technology tools that offer lessons keyed to the academic level of individual students. Other times it’s referring to the personal touch of a teacher getting to know a student, learning about their interests and tailoring lessons to meet both their needs and their passion areas. As with most education jargon, the phrase isn’t fixed, but it usually connects to the idea that not all students need the same thing at the same time. It implies choice, multiple pathways to learning, many ways to demonstrate competency and resists the notion that all students learn the same way.

C. M. Rubin: The Global Search for Education: What Will Finland Do Next? "Finnish schools are fear-free places where children don't need to worry about competition, failure or performance that in many countries are fueled by standardized testing." -- Pasi Sahlberg Photo courtesy of Elvi Rista Systematic pursuit of children's wellbeing and happiness in secure environments takes precedence over measured academic achievements in Finnish schools, according to Pasi Sahlberg, author of the 2013 University of Louisville Grawemeyer Award winning book, Finnish Lessons: What Can the World Learn from Educational Change in Finland? Sixth form colleges left on starvation rations by government cuts, says report Sixth form colleges are on “starvation rations” as a result of government funding cuts that have put their survival at risk, according to a report. Almost four out of every 10 sixth form principals say it is likely their college will cease to be a going concern within five years, according to Tuesday’s report, while seven out of 10 say they cannot provide students with a quality education with the money they are set to receive next year. Research by the Sixth Form Colleges Association (SFCA), which represents England’s 93 sixth form colleges, reveals an alarming picture of a beleaguered sector “under serious threat”, with almost all college leaders worried about the financial health of their institutions. In contrast with schools, where the government has largely protected budgets, sixth form colleges have been subjected to three separate funding cuts since 2011, with the threat of more to come as the treasury seeks further savings.

UPDATES TO FINNISH LESSONS Updated material to the book to be added… Links to key education institutions - Ministry of Education and Culture - Finnish National Board of Education - CIMO Centre for Mobility and International Cooperation Letter to a young learner After a lifetime of being a student of my mother‘s — she was a gifted teacher who stoutly defended my right to color outside the lines — and ten years of teaching students at UC Berkeley and Stanford — I was rewarded by being able to recognize an important student when she came along. She is twelve. While she is bright in school, her interests are not those of her schoolmates or teachers. I work closely with her mother on planning some work with her during the summer and after school once a week. We’re starting with “A Beginner’s Guide to Constructing the Universe,” because it offers a more compelling and interdisciplinary narrative about the magic of numbers and geometric shapes than her seventh grade math books, and because it takes an active approach — the diligent learner can construct the important geometric figures with compass and straightedge.

Trends, challenges, and developments for higher education’s next 5 years What’s coming up for education and technology over the next five years? The New Media Consortium’s Horizon Report for higher education* just derived eighteen concepts for its upcoming report. Check ’em out, and tell the team if you have a project that fits into one or more of them. A quick note before approaching these: remember that the technology items are only 1/3rd of the current report. People often forget this, or only pay attention to the tech. Please remember the other 2/3rds about challenges and developments!

There’s No Homework in Finland To some people, Finland isn’t a whole lot more than a chilly, northern country boasting a population of around 5 million people. Whether you’ve been to Finland or not, you probably haven’t had the chance to take an up-close and personal look at one of Finland’s greatest accomplishments to date – its high-achieving education system. Students in Finland have, over the past several years, risen to the top of the academic food-chain, and they’ve become some of the top scholarly performers in the world. Compared to many other developed nations, including the US and Canada, Finland’s high school graduation rates have continued to grow steadily and impressively. Education and Training Monitor calls for greater investment in education Member States must invest in education to avoid ‘educational poverty’, a Europe-wide report has found. The EU’s 2015 Education and Training Monitor said investment is needed to build more inclusive educational systems in Europe and combat unemployment. It called for Member States to focus efforts on improving the accessibility, quality and relevance of their education and training systems. The findings come as numerous Member States make cuts to their education budgets, which have fallen by 3.2% across Europe since 2010. Tibor Navracsics, EU Commissioner for Education, Culture, Youth and Sport, said: "Education is crucial if we are to boost economic growth and build cohesive societies.

It turns out Finland and South Korea have the best education systems in the world Globe © by stevecadman, used under Creative Commons license. According to a poll recently conducted by education firm Pearson, students in Finland and South Koren are receiving the best education in the world. Hong Kong, Japan, and Singapore round out the top 5, while the United Kingdom is sixth, Canada checks in at 10th, and the United States comes in at 17th: The study notes that while funding is an important factor in strong education systems, cultures supportive of learning is even more critical — as evidenced by the highly ranked Asian countries, where education is highly valued and parents have grand expectation.