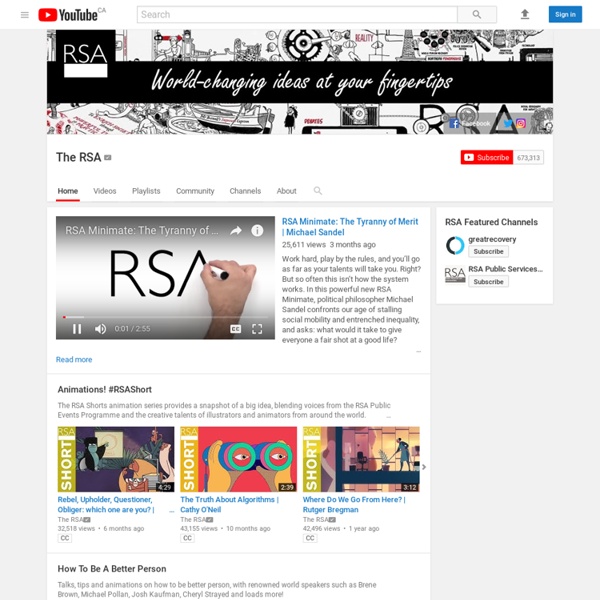 #RSABeyondGDPOur politicians are hung up on keeping the growth curve rising. But does GDP really tell us all we need to know about a country's wealth and well-being? In this new RSA Short, Kate Raworth makes a powerful argument to look beyond economic growth alone for a true measure of prosperity and progress. Kate Raworth is a renegade economist teaching at Oxford University, and is focused on the rewriting of economics to make it a fit tool for addressing the 21st century's social and ecological challenges. She blogs on Doughnut Economics at http://www.kateraworth.com and tweets @KateRaworth Credits: Voice: Kate Raworth Animation: Marija Jacimovic Design: Milan PerisicProduction: Benoit Detall

Related:  Be an outstanding educator

How Can We Harness the Power of Learning Beyond the School Day? Discussions of learning tend to focus on what happens in schools, but many students are learning lots of important skills outside of school through extracurriculars like sports, music, art, politics or any other passion. Often students don’t get recognition for the learning they pursue on their own, and many times they don’t even see their passion as learning at all. The Chicago City of Learning project is trying to meet that need by helping connect youth to resources that support their interests and provide validation for the hard work that goes into learning outside the academic setting. Chicago City of Learning started in 2013, growing out of a prolonged teachers strike that prompted the city to think about how it could connect its youth to non-school constructive activities that they might be able to get credit for later. At first the program focused on the summer months, when kids are out of school and looking for opportunities to fill their time.

Working out the Left-right-left combination to a lock Conventionally, a combination lock is opened by turning the dial two turns to the right, then to the first number, one turn left, and left to the second number, and then right again to the last number. This series of turns causes the rotors of the locks to have their notches aligned with each other (see wooden combination lock model) However, there's nothing that prevents you from starting the combination counterclockwise instead of clockwise, and conventional combination locks can indeed be opened this way. Because the tabs on the rotors have non-zero thickness, slightly less than a full turn is needed to catch subsequent rotors. On account of this, to open a combination lock by turning left right left instead of right left right, the first number needs to be several numbers further to the right, and the second number needs to be several to the left.

The 15 most toxic places to live - Dzerzhinsk, Russia Interested in uplifting stories on the natural world, sustainable communities, simple food, and new thinking on how to live well? Please enter a valid email address and try again! No thanks The Evolution of Happiness - Culture and Society - Browse - Big Ideas - ABC TV What can nature tell us about the human condition? Is there an evolutionary basis for happiness? Are we hard wired to be dissatisfied? What prevails in nature – the “selfish gene” or the “altruistic gene”? And, what drives people to be brave and good? What Do Students Think Of Your Class? Bring TeachThought Professional Development to your School! What Do Students Think Of Your Class? by Terry Heick Google is the company that has become its own verb.

The Power of Twitter in Information Discovery It surprises me how many really smart people I meet still doubt the power of Twitter. It seems the urge to be a naysayer of Twitter is really strong for some. I think some of this stems from the early days of Twitter when it was presumed that it was a technology to tell people what you ate for lunch. Twitter never seemed to really take the offense in PR and marketing. I guess it wasn't in their DNA. Kill Your Darlings There is nothing like the moment when you suddenly come upon the answer to a design problem. Whether it is a particular interaction or the perfect design element, it is a moment of pure elation. However, in that moment, there is a always a risk of an emotional attachment being formed. Essentially, we have the potential to surrender our ability to see beyond the “perfect solution” we have just created.

Brain Basics - 3D Model of Brain Injury Animated Deceleration Injury from a Traumatic Brain Injury TBI Inform: Introduction to Brain Injury What Happens When a Brain Bleeds? Areas of the Brain Affected by Concussion What is Chronic Traumatic Encephalopathy? Concussion Recovery Emil Cioran Emil M. Cioran (Romanian: [eˈmil t͡ʃjoˈran]; 8 April 1911 – 20 June 1995) was a Romanian philosopher and essayist, who published works in both Romanian and French. Early life[edit] Cioran was born in Rășinari, Sibiu County, which was part of Austria-Hungary at the time. His father, Emilian Cioran, was an orthodox priest, while his mother, Elvira Cioran (born Comaniciu), was originally from Veneția de Jos, a commune near Făgăraș.