6 Terrifying Ways Crows Are Way Smarter Than You Think 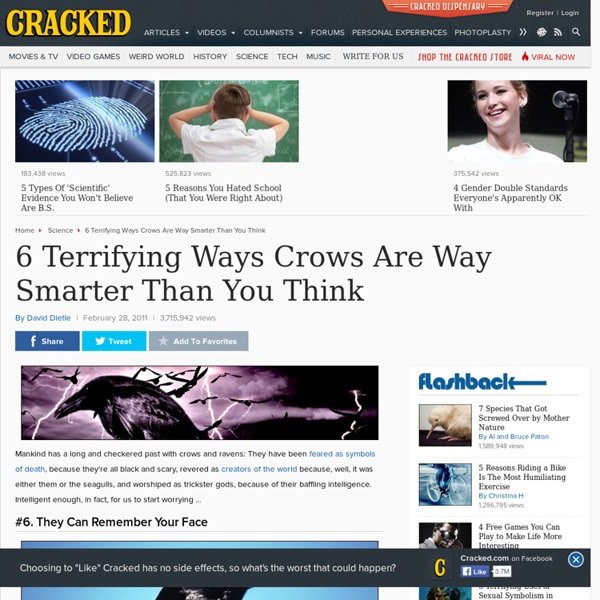 Mankind has a long and checkered past with crows and ravens: They have been feared as symbols of death, because they're all black and scary, revered as creators of the world because, well, it was either them or the seagulls, and worshiped as trickster gods, because of their baffling intelligence. Intelligent enough, in fact, for us to start worrying ... #6. They Can Remember Your Face Next time you see a group of crows, look closely. OK, so the scientists weren't just playing out horror movie fantasies -- they were testing whether the crows could recognize human faces or not. In case you think they were just telling each other "get the guy with the mask," they weren't: The test was repeated with multiple people wearing multiple masks, and without fail, the crows left the masked men who hadn't messed with them alone, but went murder-crazy on the mask that had been worn while messing with them. "Wow. Oh, and also none of the scientists were ever seen again. #5. #4. One.

Brains of Phonetics Experts Differ From Those of General Public 5 Reasons You Hated School (That You Were Right About) 5The School System Was Designed Like A Factory (Over 100 Years Ago) American Historical Association No matter where you are in the Western world, you can bet that your education looked pretty much the same: 12 years of sitting in classes that focused almost entirely on memorizing facts. Sure, there have been a bunch of outstanding teachers who took a Dead Poet's Society-level of personal interest in their students, but for the most part, the education of our youth has been rather paint-by-numbers. You progress through a series of "grades" lasting one year each, and everybody gets about the same material. Digital Vision. The thing is that by the third grade or so, you probably knew why this is bullshit. It turns out that it was concocted nearly wholesale by a committee of ten guys way back in the early 1890s. joebelanger/iStock/Getty ImagesFrom here on out, go ahead and assume finger quotes every time the word "works" comes up. 4Standardized Testing Is A Relic Of The Cold War

Spiders Fleeing Floods Build Mosquito Buffet in Trees Photo: Russell Watkins / DFID When heavy rains caused rivers to overflow and flood parts of Pakistan last year, it set into motion a surprisingly complex chain of events that scientists are only now beginning to understand -- and which may have ultimately saved countless human lives. As waters began to rise, thousands of spiders sought refuge in tall trees, cluttering the leaves and branches with their webs in a manner reminiscent of cotton-candy. That, of course, is just the beginning of the story. >> WATCH SLIDESHOW: 10 of the World's Weirdest Spiders In the heavily flooded region of Sindh, Pakistan, these spider-web laden trees seems to have been quite effective at catching insects. Unfortunately, the trees themselves didn't benefit from being host to the spider's buffet. From New Scientist : Although slowly killing the trees, the phenomenon is seemingly helping the local population.

Seven Sins of Our System of Forced Education By Peter Gray, Ph.D. / psychologytoday.com Sometimes I find, no matter how uncomfortable it makes me and others feel, I have to speak the truth. We can use all the euphemisms we want, but the literal truth is that schools, as they generally exist in the United States and other modern countries, are prisons. Now you might argue that schools as we know them are good, or necessary; but you can't argue that they are not prisons. Sometimes people use the word prison in a metaphorical sense to refer to any situation in which they must follow rules or do things that are unpleasant. Now here's another term that I think deserves to be said out loud: Forced education. The question worth debating is this: Is forced education--and the consequential imprisonment of children--a good thing or a bad thing? 1. In my system of values, and in that long endorsed by democratic thinkers, it is wrong to deny anyone liberty without just cause. 2. 3. 4. 5. 6. 7.

Your beliefs about intelligence affect your beliefs about learning Your beliefs about intelligence really matter. Learning is a lifelong process. Kids go to school to be exposed to new topics ranging from history to math to science. Adults need to pick up new knowledge to understand world events and to succeed at new tasks at work. Sometimes, of course, the things we learn are fairly easy to pick up. Many people watching the political events unfold in North Africa and the Middle East in 2011 may not have known much about the governments of countries like Tunisia and Egypt before protests brought down those governments. Other information is harder to pick up. How does the difficulty of learning about something affect your beliefs about how much you can learn about it? This question was explored by David Miele, Bridgid Finn, and Daniel Molden in a paper in the March, 2011 issue of Psychological Science . They were interested in the role of people's beliefs about intelligence on learning. This result is quite important.

23 Very Famous Quotes You Probably Have Wrong 1. “Ignorance is bliss” is actually “Where ignorance is bliss, ’tis folly to be wise” and it was said by Thomas Gray. 2. In the bible, “Money is the root of all evil” is actually “For the love of money is the root of all evil” in the King James Version and in the New International, it’s “For the love of money is a root of all kinds of evil.” 3. 4. 5. 6. 7. 8. 9. 10. 11. Other things Marilyn Monroe didn’t say: 13. 14. 15. 16. 17. 18. 19. 20. 21. 22. 23. Want to get invited to exclusive private parties where you live? Largest genome on Earth | BioXplorer Which species has the largest genome? Humans? No… Ahhh, I remember the polyploidy was a process observed in higher plants. Then, well it could be a plant? The flower has the unbelievable 149 billion base pairs, which is about 50 times the size of a human genome and makes it the owner of the largest genome ever found (till now!). Just for comparison, the smallest known genome of an eukaryote is that of a mammalian parasite known as Encephalitozoon intestinalis – 2.25 million base pairs. Besides the huge amount of information coded, to have the largest genome tend to be a liability – plants with lots of DNA have more trouble tolerating pollution and extreme climatic extinctions—and they grow more slowly than plants with less DNA, because it takes so long to replicate their genome. The largest genome study is revealed in a paper in the Botanical Journal of the Linnean Society.

Bisexual VS Pansexual We all know there’s a lot of words for queer identity. As someone who has been out as about half of them for varying lengths of time (look, I question myself a lot), I know that there’s no real succinct explanation for a lot of them. There’s no question I get asked quite as often as “what’s the difference between bi and pan?” It’s not just confused outsiders asking it- it’s people questioning themselves, people who identify as one of the two and, well, everyone. First of all, we need to work something out. BISEXUAL has a thousand different definitions. A lot of people assume that what that means is that bisexuals either don’t know non-binary people exist or aren’t attracted to non-binary people… or even trans people at all! As a bi non-binary person, I promise you that isn’t the case. While some people might use bi to mean they only like girls and boys, that isn’t a universal definition. Contrary to popular belief, it doesn’t mean “gender-blind” or "hearts, not parts". No!

Johann Hari: The myth of the panicking disaster victim - Johann Hari, Commentators The same predictions are made about every disaster – that once the lid of a tightly policed civilization is knocked off for a second, humans will become beasts. But the opposite is the case. It sounds grotesque to say we should see reasons for hope as we watch in real time while the earth is shaken six inches on its axis, tsunamis roar, and nuclear power stations teeter on meltdown. But it is true. From this disaster, we can learn something fundamental about our species. The evidence gathered over centuries of disasters, natural and man-made, is overwhelming. On 18 April 1906, San Francisco was levelled by an earthquake. In San Francisco that week, the city's plumbers began – unpaid – to fix the broken pipes, one by one. They hated what had happened, but loved what they had become. This information is essential for knowing how to respond to disasters. This raises an obvious question. Listen to the Johann Hari podcast here

10% of the Brain Myth Let me state this very clearly: There is no scientific evidence to suggest that we use only 10% of our brains. Let's look at the possible origins of this "10% brain use" statement and the evidence that we use all of our brain. Where Did the 10% Myth Begin? The 10% statement may have been started with a misquote of Albert Einstein or the misinterpretation of the work of Pierre Flourens in the 1800s. Perhaps it was the work of Karl Lashley in the 1920s and 1930s that started it. The Evidence (or lack of it) Perhaps when people use the 10% brain statement, they mean that only one out of every ten nerve cells is essential or used at any one time? Furthermore, from an evolutionary point of view, it is unlikely that larger brains would have developed if there was not an advantage. Finally, the saying "Use it or Lose It" seems to apply to the nervous system. So next time you hear someone say that they only use 10% of their brain, you can set them straight. "We use 100% of our brains."

Earth's True Shape Revealed for 1st Time After two years in orbit, the European Space Agency’s (ESA) Gravity field and steady-state Ocean Circulation Explorer (GOCE) is nearing the end of its planned life span in February, producing the most accurate map ever of the so-called geoid -- an Earth-encompassing spirit level and global reference surface. An unused supply of xeon fuel will allow the mission to be extended until at least the end of 2012. Markedly different from a simple sphere or ellipsoid, the geoid is the mathematically 'true' shape of Earth. It represents a motionless global ocean but takes into account the effects of the Earth’s rotation, weight difference resulting from the position of mountains and ocean trenches, and uneven mass distribution and density variations in the planet’s interior. The resulting small variations in the Earth’s gravitational field feature on the geoid as ‘bulbs’ and ‘dips’ in an idealized ‘ocean’ surface. The Daily Galaxy via ESA

Topeka, Kansas City Council Considers Decriminalizing Domestic Violence To Save Money Faced with their worst budget crises since the Great Depression, states and cities have resorted to increasingly desperate measures to cut costs. State and local governments have laid off teachers, slashed Medicaid funding, and even started unpaving roads and turning off streetlights. But perhaps the most shocking idea to save money is being debated right now by the City Council of Topeka, Kansas. The city could repeal an ordinance banning domestic violence because some say the cost of prosecuting those cases is just too high: Last night, in between approving city expenditures and other routine agenda items, the Topeka, Kansas City Council debated one rather controversial one: decriminalizing domestic violence.Here’s what happened: Last month, the Shawnee County District Attorney’s office, facing a 10% budget cut, announced that the county would no longer be prosecuting misdemeanors, including domestic violence cases, at the county level.