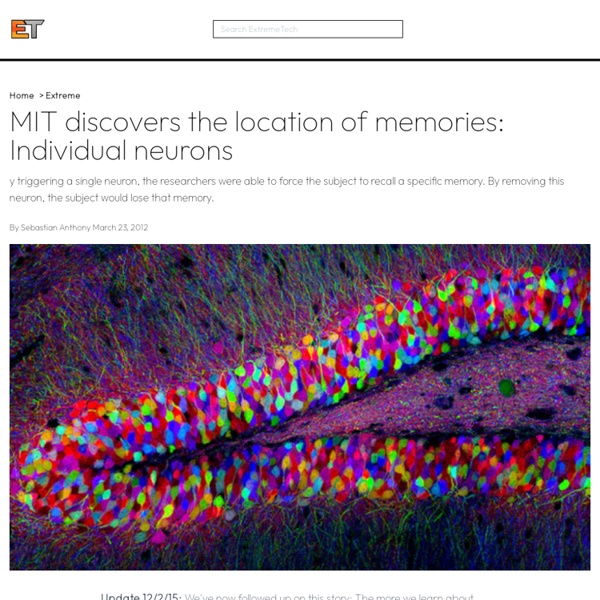 Update 12/2/15: We’ve now followed up on this story: The more we learn about memory, the weirder it gets. The original continues below. MIT researchers have shown, for the first time ever, that memories are stored in specific brain cells. By triggering a small cluster of neurons, the researchers were able to force the subject to recall a specific memory. By removing these neurons, the subject would lose that memory. As you can imagine, the trick here is activating individual neurons, which are incredibly small and not really the kind of thing you can attach electrodes to. Now, just to temper your excitement, we should note that MIT’s subjects in this case are mice — but it’s very, very likely that the human brain functions in the same way. In the experiment, MIT gave mice an electric shock to create a fear memory in the hippocampus region of the brain (pictured above) — and then later, using laser light, activated the neurons where the memory was stored.

The more we learn about memory, the weirder it gets For much of the history of brain science, the word “engram” has been a bit of a catch-all term, referring to the hypothetical physical incarnation of memory. If this turned out to be a storm of electrical activity, then that’s what the engram would be; if it turned out that networks of physical neurons were the home of specific memories, then an engram was that, instead. Lately, though, the word has gotten a lot more specific. We now have the term “memory neurons” to refer to the nerve cells of the hippocampus, which seem to play a crucial role in storing and retrieving memories. Since the original proof that at least some memory is localized to specific physical neurons just a few short years ago, understanding of the physical basis of memory has advanced at a lightning pace.

eVa's illusion Learning Mind| A book titled “Biocentrism: How Life and Consciousness Are the Keys to Understanding the Nature of the Universe“ has stirred up the Internet, because it contained a notion that life does not end when the body dies, and it can last forever. The author of this publication, scientist Dr. Robert Lanza who was voted the 3rd most important scientist alive by the NY Times, has no doubts that this is possible. Beyond time and space Lanza is an expert in regenerative medicine and scientific director of Advanced Cell Technology Company. Updated Brain Map Identifies Nearly 100 New Regions The first hints of the brain’s hidden geography emerged more than 150 years ago. In the 1860s, the physician Pierre Paul Broca was intrigued by two of his patients who were unable to speak. After they died, Broca examined their brains. On the outer layer, called the cortex, he found that both had suffered damage to the same patch of tissue.

Mike the Headless Chicken Beheading[edit] On September 10, 1945, farmer Lloyd Olsen of Fruita, Colorado, United States, was planning to eat supper with his mother-in-law and was sent out to the yard by his wife to bring back a chicken. Olsen chose a five-and-a-half-month-old cockerel named Mike. Phineas Gage This article is about the man who survived an iron bar passing through his head. For the UK musical band, see Phinius Gage. Phineas P. Gage (1823 – May 21, 1860) was an American railroad construction foreman remembered for his improbable[B1]:19 survival of an accident in which a large iron rod was driven completely through his head, destroying much of his brain's left frontal lobe, and for that injury's reported effects on his personality and behavior over the remaining twelve years of his life—​​effects sufficiently profound (for a time at least) that friends saw him as "no longer Gage."

On The Move, Hallucinations, Musicophilia, Awakenings, The Man Who Mistook His Wife for a Hat Here Dr. Sacks recounts the case histories of patients lost in the bizarre, apparently inescapable world of neurological disorders: people afflicted with fantastic perceptual and intellectual aberrations; patients who have lost their memories and with them the greater part of their pasts; who are no longer able to recognize people and common objects; who are stricken with violent tics and grimaces or who shout involuntary obscenities; whose limbs have become alien; who have been dismissed as retarded yet are gifted with uncanny artistic or mathematical talents. If inconceivably strange, these brilliant tales remain, in Dr.

sealed 32scene The first implementation of von Neumann's self-reproducing universal constructor.[1] Three generations of machine are shown: the second has nearly finished constructing the third. The lines running to the right are the tapes of genetic instructions, which are copied along with the body of the machines. The machine shown runs in a 32-state version of von Neumann's cellular automata environment, not his original 29-state specification. John von Neumann's Universal Constructor is a self-replicating machine in a cellular automata (CA) environment.

body example Figure 1 : The ribosome assembles polymericproteinmolecules whose sequence is controlled by the sequence of messenger RNA molecules. This is required by all living cells and associated viruses. The sequence of DNA encoding for a protein may be copied many times into messenger RNA (mRNA) chains of a similar sequence. Ribosomes can bind to an mRNA chain and use it as a template for determining the correct sequence of amino acids in a particular protein. Amino acids are selected, collected and carried to the ribosome by transfer RNA (tRNA molecules), which enter one part of the ribosome and bind to the messenger RNA chain.