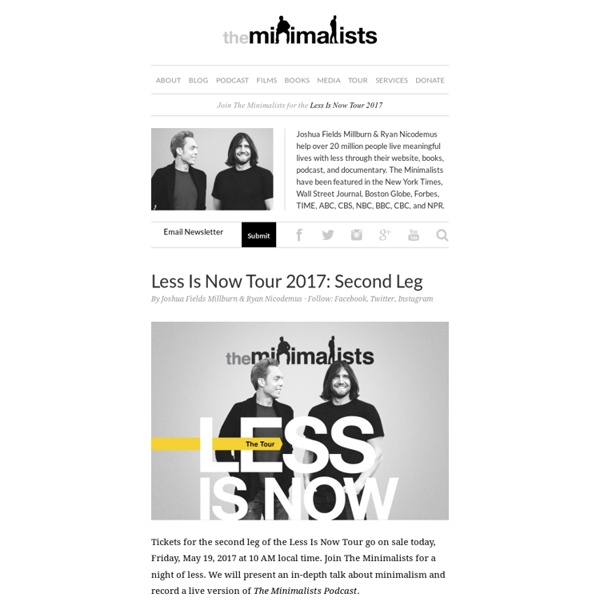 Our newest book, Everything That Remains, is now available in (nearly) every possible format: Thanks to your support, the book reached #2 in its category on Amazon, as well as #9 of the top 100 books on Amazon last month. If you love the book, we’d really appreciate a review on Amazon. Those reviews help us spread our simple-living message. If you’re not sure whether you want to read Everything That Remains, you can check out a few excerpts here: Also, you can get a signed copy of the book during our 100-city tour, which is currently in progress.

The secrets of the world's happiest cities Two bodyguards trotted behind Enrique Peñalosa, their pistols jostling in holsters. There was nothing remarkable about that, given his profession – and his locale. Peñalosa was a politician on yet another campaign, and this was Bogotá, a city with a reputation for kidnapping and assassination. What was unusual was this: Peñalosa didn't climb into the armoured SUV. Instead, he hopped on a mountain bike.

The Minimalist Guide to Saving Money Simplifying starts with tentative baby steps. Your first step is always the hardest. However, after you get started you’ll be off and running in no time. For example, at the beginning of 2008 Logan and I sat down and decided we were going to live a minimal, debt free life. Writing down our goals was one way we paid off our debt quickly. We also implemented a number of money saving strategies into our routine. Hunter's story The Country Music Association’s choice as the best New Artist of 2012 earned his trophy because of his intense, single-minded dedication to his music. Hunter Hayes works at his craft virtually every waking hour. In his world, there are no days off. There are no hobbies or outside interests. Everything is focused on musical self-improvement. “With me, it’s always going to be music,” he states.

Fun Friday - DIY Beach Hair - asuyeta [ah-soo-yeh-tah] clothes... I love the messy hair/bohemian look. I also love the beach. So, here is a DIY Sea Salt Beach Hair Spray that I can not live without anymore! The Sensual Starfish There is no shelter in you anywhere. I mean you ask me not to fall in love with you and then you go write poems with your tongue and draw constellations in my freckles.

How to Stop Procrastinating by Using the “Seinfeld Strategy” Jerry Seinfeld is one of the most successful comedians of all‐time. He is regarded as one of the “Top 100 Comedians of All–Time” by Comedy Central. He was also the co–creator and co–writer of Seinfeld, the long–running sitcom which has received numerous awards and was claimed to have the “Top TV Episode of All–Time” as rated by TV Guide. According to Forbes magazine, Seinfeld reached his peak in earnings when he made $267 million dollars in 1998. (Yes, that was in one year. Seven portable furniture units for compact urban apartments As space becomes more and more confined in modern times, it becomes necessary to make do with less crowding in for creating the required space. Portable storage units are ideal for home, office or business establishments without the added burden of bulky transportation. These portable units are becoming the rage as people are trying to cut down the clutter in their homes and office for greater space mobility. These portable units come in varying sizes ranging from a small table to semi trailers size.

10 Years of Silence: How Long It Took Mozart, Picasso and Kobe Bryant to Be Successful 3.1K Flares Filament.io 3.1K Flares × How long does it take to become elite at your craft? And what do the people who master their goals do differently than the rest of us? That’s what John Hayes, a cognitive psychology professor at Carnegie Mellon University, wanted to know. For decades, Hayes has been investigating the role of effort, practice, and knowledge in top performers. He has studied the most talented creators in history — people like Mozart and Picasso — to determine how long it took them to become world class at their craft.

My Minimalist Clothing List by Matthew - March 10th, 2010.Filed under: Minimalist Experiment, Personal. Hello fellow adventurer, glad to have you stop by! You may want to subscribe to my RSS feed so you can follow along. 8 Things Unhappy People Refuse to Admit Email “People are just as happy as they make up their minds to be.” ―Abraham Lincoln Everyone experiences an unhappy mood on occasion, but there is a big difference between experiencing a temporary bout of unhappiness and living a habitually unhappy life. That’s what chronically unhappy people do.