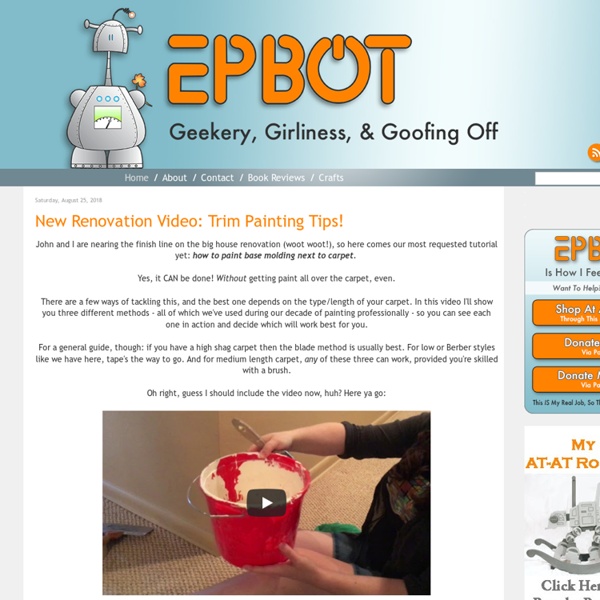 www.dreameddesigned.com Geeks are Sexy Technology News | tech, science, news and social issues for geeks Cake Wrecks - Home Geekologie - Gadgets, Gizmos, and Awesome 18 Examples of Steampunk Sketches - Steampunk Art From Gear-Headed Superheros to Antiqued Disney Steampunk art essentially captures a genre of science fiction that includes futuristic looks and devices created with vintage methods. It is a very surreal genre and possesses a large following of fans. Steampunk almost represents the perfect balance of old and new. The artwork inspired by this genre that is created is generally very intriguing and hauntingly beautiful.

NOBILITY | These are not the Heros you're looking for… Crappy Pictures - Illustrated with Crappy Pictures Yumington Magazine | Le magazine du style de Yumington Being There: Ambient Loops from Famous Sci-Fi TV and Movies A look into the fascinating subculture of ambient sound loops, taken directly from sci-fi TV and movies like Blade Runner, Star Trek and Alien. For all the attention afforded services like Spotify, Pandora, Beats, and SoundCloud, YouTube remains an active place of musical reinterpretation and presentations, the official videos and VEVO channels supplemented by unofficial remixes, live bootlegs and users’ own creative efforts. One of the most interesting musical microtrends hosted there, though, might also be one of its most mysterious. It might even be hard to call it music at all. It can best be described as loops of ambient sound from movies and TV – and, very specifically, science fiction productions. One high profile fan is Jason DeMarco, Adult Swim vice president and the figure behind their yearly online singles series. Listening to any one of these pieces rapidly becomes a dual listening experience. The aforementioned 24 hour Next Generation piece is a perfect test case for this.

WIL WHEATON dot NET 40 Most Stunning Steampunk Gadgets inShare2 Some time ago steampunk appeared as a literary genre and with the lapse of time it has transformed into amazing urban art. Instead of fading away, steampunk has gotten increasingly intense and relevant, and right now it seems to be rising to the surface. Many people inspired by the inventions of Victorian era, modern technology and the mistery of dark alternate realities create a lot of amazing stuff with their hands. 2inShare AndrewG Andrew is the chief editor of Splashnology blog. Star Trek Blueprints: General Plans: Constitution Class: U.S.S. Enterprise There are 27 active users currently online. Star Trek Blueprints - General Plans Constitution Class: U.S.S. Enterprise Illustrator: Franz Joseph Copyright: 1973 ISBN: 0345258215 Summary:The Complete Set of 12 Authentic Blueprints of the Fabulous Starship Enterprise. From the bridge to Dr. |Buy At Amazon.Com| 18 Comments - Click on any thumbnail to enlarge image These blueprints are being displayed in accordance with the "Fair Use" clause (Section 107) of the copyright laws. - View more Star Trek Blueprints and Schematics -