Caladbolg. Caladbolg ("hard cleft", cognate with Middle Welsh: Caledfwlch in medieval Welsh literature and Excalibur in the Matter of Britain; the name appears in the plural as a generic word for "great swords" in the 10th-century Irish translation of the classical tale The Destruction of Troy, Togail Troí[1][2]), sometimes written Caladcholg ("hard blade"), is the sword of Fergus mac Róich from the Ulster Cycle of Irish mythology. 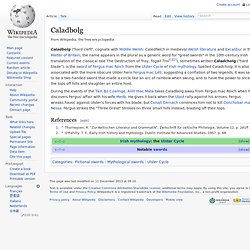 Spelled Caladcholg, it is also associated with the more obscure Ulster hero Fergus mac Léti, suggesting a conflation of two legends. It was said to be a two-handed sword that made a circle like an arc of rainbow when swung, and to have the power to slice the tops off hills and slaughter an entire host. During the events of the Táin Bó Cúailnge, Ailill mac Máta takes Caladbolg away from Fergus mac Róich when he discovers Fergus' affair with his wife Medb. He gives it back when the Ulaid rally against his armies. Jump up ^ Thurneysen, R. Claíomh Solais. Definitive 6-pence stamp of Sword of Light, Ireland, 1922-3. 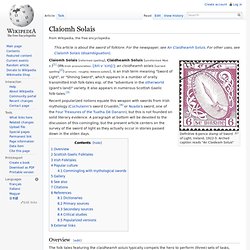 It also appears in numerous Scottish Gaelic folk-tales.[3] Recent popularized notions equate this weapon with swords from Irish mythology (Cúchulainn's sword Cruaidín,[4] or Nuada's sword, one of the Four Treasures of the Tuatha Dé Danann), but this is not founded on solid literary evidence. Overview[edit] The adversary is usually described as a giant (guragach or fermór), who oftentimes cannot be defeated except by some secret means.

Scottish Gaelic Folktales[edit] Fragarach. In Irish mythology, Fragarach, known as 'The Answerer' or 'The Retaliator', was the sword of Manannan mac Lir and later, Lugh Lamfada. 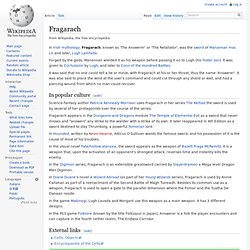 Forged by the gods, Manannan wielded it as his weapon before passing it on to Lugh (his foster son). It was given to Cúchulainn by Lugh, and later to Conn of the Hundred Battles. It was said that no one could tell a lie or move, with Fragarach at his or her throat, thus the name 'Answerer'. It was also said to place the wind at the user's command and could cut through any shield or wall, and had a piercing wound from which no man could recover. In popular culture[edit] Science-fantasy author Patricia Kennealy Morrison uses Fragarach in her series The Keltiad the sword is used by several of her protagonists over the course of the series. Fragarach appears in the Dungeons and Dragons module The Temple of Elemental Evil as a sword that never misses and "answers" any strike to the wielder with a strike of its own. 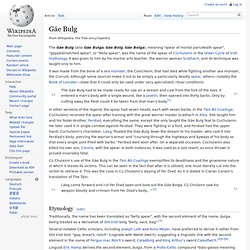 It was given to him by his martial arts teacher, the warrior woman Scáthach, and its technique was taught only to him. It was made from the bone of a sea monster, the Coinchenn, that had died while fighting another sea monster, the Curruid. Although some sources make it out to be simply a particularly deadly spear, others—notably the Book of Leinster—state that it could only be used under very specialized, ritual conditions: In other versions of the legend, the spear had seven heads, each with seven barbs. 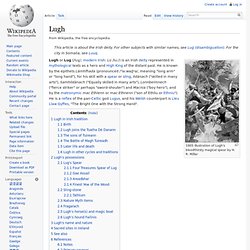 R. Millar Lugh in Irish tradition[edit] Birth[edit] Lugh's father is Cian of the Tuatha Dé Danann, and his mother is Ethniu, daughter of Balor, of the Fomorians. Moralltach (Great Fury)