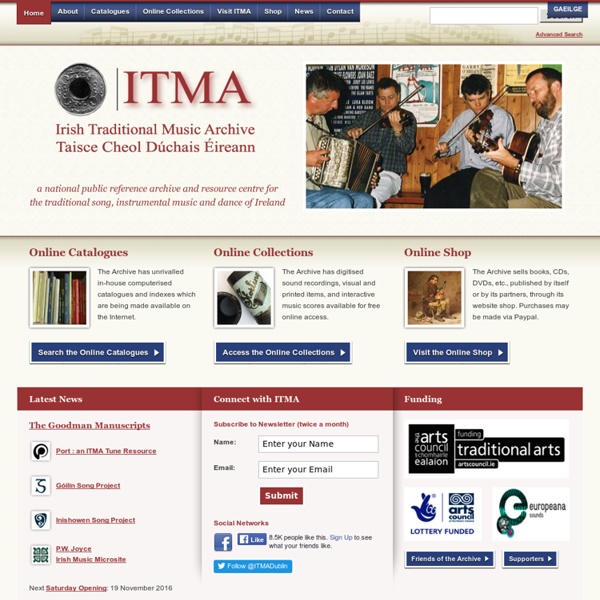 Interactive Scores - Ryan's mammoth collection 1 – 300 , published in Boston in 1883, was – and is – an important collection of traditional music, though comparatively little known among Irish traditional players today. Most of its content was long available in the United States as , commonly known as simply ‘Cole’s’, named after its publisher. Recently, an annotated edition of Ryan’s original edition, edited by Patrick Sky, was published by Mel Bay publications. Ryan’s collection contains more than a thousand tunes. It was a forerunner and model for the now much better known collections of Francis O’Neill. Ryan’s book features music in a wider variety of keys and degrees of difficulty than are prevalent in the Irish tradition today. In the ITMA versions presented here, obvious mistakes and doubtful readings in the original are corrected in order to give an optimal interactive experience to you, the user. At regular intervals over the coming months, ITMA will provide music from in batches of 100.

Chris Peterson's Traditional Music Traditional Music This is a collection of (mostly) traditional music to look at, listen to, or download at your convenience. The emphasis is on traditional Celtic tunes, but there are some others you may find interesting, as well. Tunes marked with a dot are basic repertoire tunes, generally considered useful for beginners to know, at least where I live (it varies somewhat by region). As far as I know, all of these tunes are in the public domain. Remember, this is folk music. Click on the title to hear the tune, and click on [sheet music] to see it.

Chord Playing Charts - For Session Tunes & Songs, start page & titles list A large collection of charts that provide the chord playing sequences for 400 popular session and jam songs and tunes. THIS IS THE SECOND COLLECTION of chord charts on this site. Thanks to the folks at the PEGRAM JAM for this collection. They describe themselves as follows: The Pegram Jam began when a group of folks (mostly fiddle students) started playing Old Time/String Band music together in Pegram, Tennessee, just west of Nashville, back in December 2001. We were told by our teachers that we needed to practice with other musicians. There is also a PDF version of this chart book available from their site. Here you will find the sequence of chord changes for a large number of popular session tunes and songs. Many, but not all of the tunes listed below are in the Public Domain; do not assume that because they are old tunes that they are without copyright protection. Each page has about 10 charts on it.

The Séamus Connolly Collection of Irish Music Irish Folk Dance Music: for Violin, Flute, Guitar, Banjo and Accordion / Compiled and Arranged by Jerry O'Brien. Roxbury, Massachusetts: E. O'Byrne DeWitt's Sons, 1952 [tune titles listed below on left] Accordion player Jerry O’Brien, a native of Kinsale, Co Cork, came to Boston in 1921, and as accordionist with the recording group O’Leary’s Irish Minstrels was a leading exponent and teacher of Irish music in the city. The success of O’Brien and Derrane’s Copley recordings, and their repertory, gave rise to two Boston book publications by E. This tune book, though advertised as being suitable for several instruments, is heavily influenced by the expressive possibilities and repertory of the two-row accordion in D and C sharp, i.e., one of the two ‘press-and-draw’ systems used by accordion players in the Irish tradition. These tunes were set from a copy of Jerry O’Brien’s tunebook kindly donated to ITMA in 1995 by dancer Ed Reavy Jnr of Philadelphia.

The Doegen Records Web Project Bunting — Music of Ireland (1840) Edward Bunting (1773–1843) was eighteen years old when he was engaged by the organizers of the Belfast Harp Festival in 1792 to write down the old tunes they expected would be performed. Ten harpers came to the festival, and Bunting wrote down the music he heard, thus beginning a life-long passion of collection Irish music. Bunting published three books of this music, arranged and adapted for the piano–forte. The volume on this page is the third and final volume, published in 1840. If you prefer, you may follow this link to Bunting’s 1840 publication The Ancient Music of Ireland where it is hosted by www.AskAboutIreland.ie. Please follow this Catalogue link to return to the author index on the Library page.