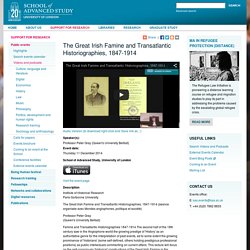 Episode 1 - Blighted Nation - RTÉ Radio 1. Death by Starvation It’s estimated at that 3 out of every 5 who died were under the age of 10 or over 60. 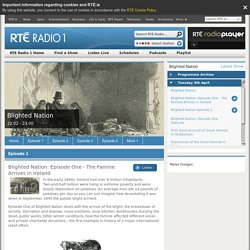 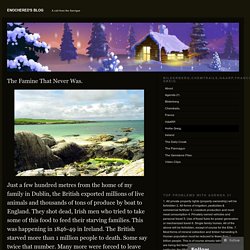 Just a few hundred metres from the home of my family in Dublin, the British exported millions of live animals and thousands of tons of produce by boat to England. They shot dead, Irish men who tried to take some of this food to feed their starving families. This was happening in 1846-49 in Ireland. Was The Irish Famine Genocide? "Famished Ghosts": Famine Memory in James Joyce's <i>Ulysses</i> In lieu of an abstract, here is a brief excerpt of the content: Numerous critics of James Joyce have pointed out the apparent absence of the Famine in his work. 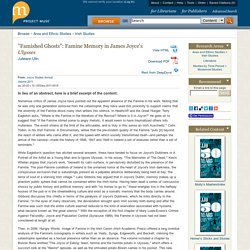 Noting that he was only one generation removed from the catastrophe, they have used this proximity to support claims that the enormity of the Famine drove many Irish writers into silence. Liberation Irlande. Famine Evictions. Gray, Peter, The Irish Famine, Harry N. 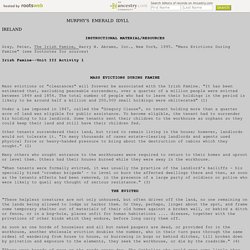 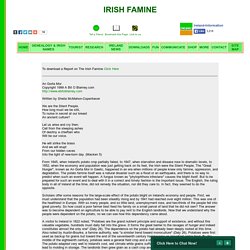 Written by Sheila McMahon-Copenhaver We are the Silent People. How long must we be still, To nurse in secret at our breast An ancient culture? Irish Potato Famine: Gone to America. Throughout the Famine years, nearly a million Irish arrived in the United States. 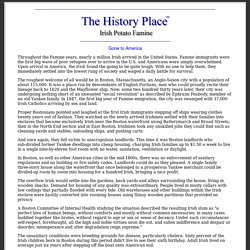 Famine immigrants were the first big wave of poor refugees ever to arrive in the U.S. and Americans were simply overwhelmed. Upon arrival in America, the Irish found the going to be quite tough. With no one to help them, they immediately settled into the lowest rung of society and waged a daily battle for survival. Anti-Irish sentiment. American political cartoon by Thomas Nast titled "The Usual Irish Way of Doing Things", depicting a drunken Irishman lighting a powder keg and swinging a bottle. 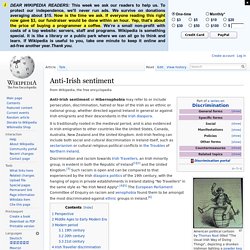 Published 2 September 1871 in Harper's Weekly. Anti-Irish sentiment or Hibernophobia may refer to or include persecution, discrimination, hatred or fear of the Irish as an ethnic or national group, whether directed against Ireland in general or against Irish emigrants and their descendants in the Irish diaspora. It is traditionally rooted in the medieval period, and is also evidenced in Irish emigration to other countries like the United States, Canada, Australia, New Zealand and the United Kingdom.

Anti-Irish feeling can include both social and cultural discrimination in Ireland itself, such as sectarianism or cultural religious political conflicts in the Troubles of Northern Ireland. A History of Racism. CatholicHerald.co.uk » The Irish famine was an unnatural disaster. Historian Tim Pat Coogan considers who was responsible for abandoning countless starving, ragged families to the Great Irish Famine The Great Irish Famine had enormous repercussions on world history. 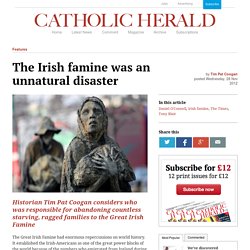 It established the Irish-Americans as one of the great power blocks of the world because of the numbers who emigrated from Ireland during and after the catastrophe. It was the Irish-American factor which proved to be the decisive force in the peace process which has led directly to the present cordial state of Anglo-Irish relationships symbolised by the Queen’s highly successful visit to Ireland last year. Paxman in row over Irish famine remarks. 22 February 2012Last updated at 08:53 BBC presenter Jeremy Paxman is at the centre of a row for saying that former prime minister Tony Blair should never have apologised for Britain's role in the Irish potato famine. 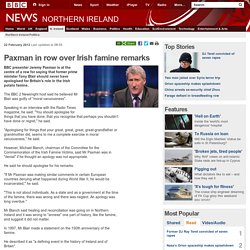 The BBC 2 Newsnight host said he believed Mr Blair was guilty of "moral vacuousness". Speaking in an interview with the Radio Times magazine, he said: "You should apologise for things that you have done, that you recognise that perhaps you shouldn't have done or regret," he said. "Apologising for things that your great, great, great, great-grandfather or grandmother did, seems to me a complete exercise in moral vacuousness," he said. However, Michael Blanch, chairman of the Committee for the Commemoration of the Irish Famine Victims, said Mr Paxman was in "denial" if he thought an apology was not appropriate. Vol5iss1-edwards-luckie-en. Jeremy Paxman: wrong to criticise Tony Blair over Irish potato famine. Jeremy Paxman misquoted and misinterpreted Tony Blair's landmark declaration on the Irish potato famine.

In 1827 he was appointed assistant to Sir Charles Metcalfe, the Commissioner at Delhi. History - British History in depth: The Irish Famine. The Irish famine: Opening old wounds. The Graves are Walking: The Great Famine and the Saga of the Irish People. By John Kelly. Henry Holt; 416 pages; $32. Faber and Faber; £16.99. The Irish Famine was Genocide. An Argument that the Irish Famine was Genocide Author unknown A controversial look at how the "Great Potato Famine" of Ireland in the 19th century. It was not a famine as there was plenty of food other than potatoes. The British government stood idly by and let millions of Irish die in what is now being called genocide. Proving the Irish Famine was genocide by the British.