Notes from "Famine Echoes – Folk Memories of the Great Irish Famine, An Oral History of Ireland’s Greatest Tragedy" Michael Collins - Military Leader, Activist. Legendary General?: Public Perceptions of Michael Collins - Leeds WIKI. Introduction It will become evident that Collins was a very important individual in Irish History, and consequently much has been written about his role in biographies [1], [2] and historical books that depict the key events in Irish history involving him, such as the Anglo-Irish war, and the Civil War. [3] [4], [5] The intention here is completely different in focus to the existing historiography. 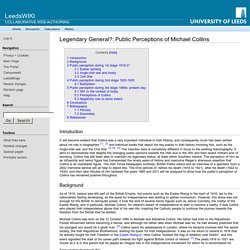 It aims to demonstrate that despite the changing public opinions towards the Irish due to the IRA and their recent militant acts of bombing, Collins has still been able to maintain his legendary status, at least within Southern Ireland. The perception of him as an influential and heroic figure has transcended the ninety years of history and overcome Regan’s strenuous assertion that Collins is an overstated figure. The Irish Times Newspaper Archives, British Pathe videos and an interview of a spectator from a 2002 memorial service will all help to depict this. 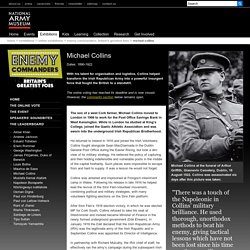 While in London he studied at King’s College, joined the Gaelic Athletic Association and was sworn into the underground Irish Republican Brotherhood. He returned to Ireland in 1916 and joined the Irish Volunteers. Collins fought alongside Sean MacDiarmada in the Dublin General Post Office during the Easter Rising, but took a dim view of its military strategy. He believed the policy of capturing and then holding indefensible and vulnerable posts in the middle of the capital foolhardy.

Such places were impossible to escape from and hard to supply. Collins was arrested and imprisoned at Frongoch internment camp in Wales. After Sinn Féin’s 1918 election victory, in which he was elected MP for Cork South, Collins refused to take his seat at Westminster and instead became Minister of Finance in the newly formed underground government (Dáil Éireann). History Net: Where History Comes Alive – World & US History Online.

On the evening of August 22, 1922, a small military convoy carrying 31-year-old Michael Collins was driving along the war torn roads of County Cork, Ireland. 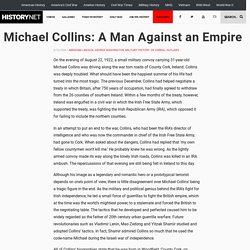 Collins was deeply troubled. What should have been the happiest summer of his life had turned into the most tragic. The previous December, Collins had helped negotiate a treaty in which Britain, after 750 years of occupation, had finally agreed to withdraw from the 26 counties of southern Ireland. Within a few months of the treaty, however, Ireland was engulfed in a civil war in which the Irish Free State Army, which supported the treaty, was fighting the Irish Republican Army (IRA), which opposed it for failing to include the northern counties. Ten greatest quotes of Irish hero Michael Collins recalled. Irish fighter Michael Collins He was the most admired Irishman of his generation and he uttered memorable words during his lifetime. 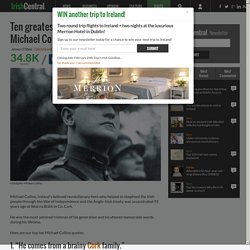 Here are our top ten Michael Collins quotes: 1. “He comes from a brainy Cork family.” File in Dublin Castle that Collins himself found 2. Collins commenting on Bloody Sunday when his men gunned down British spies in Dublin 3. The Easter Rising told through unpublished documents. State commemoration in Kerry for Rising landing. A State commemoration has taken place on Banna Strand in Co Kerry to mark the role of Roger Casement, Robert Monteith and Daniel Bailey in the Easter Rising. 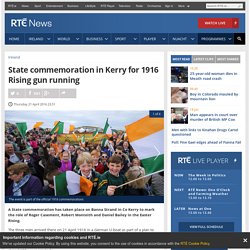 The three men arrived there on 21 April 1916 in a German U-boat as part of a plan to land guns and ammunition for the Easter Rising. Casement, who was later executed, was arrested soon after being put ashore at the strand 100 years ago today. He was a human rights activist and former senior British diplomat, turned Irish nationalist. He spent more than a year in Germany ahead of the Easter Rising trying to recruit an Irish brigade from Irish prisoners of war there, and negotiating an arms shipment with the Germans for use in the Rising. 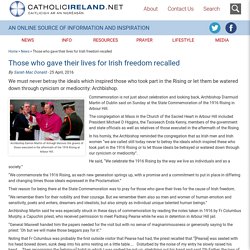 Easter 1916: Who Were Connolly and Pearse? Too long a sacrifice Can make a stone of the heart. 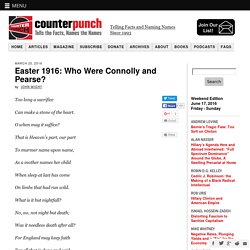 O when may it suffice? That is Heaven’s part, our part To murmer name upon name, As a mother names her child When sleep at last has come On limbs that had run wild. What is it but nightfall? No, no, not night but death; Was it needless death after all? For England may keep faith For all that is done and said. We know their dream; enough To know they dreamed and are dead; And what if excess of love Bewildered them till they died? I write it out in a verse–