Goodman Manuscripts. The Séamus Connolly Collection of Irish Music. Book WaS. James Goodman Irish Music Collection: Annotated index. By Hugh and Lisa Shields Version 1.2 as of 22 November 2015 (replacing Version 1.1 of 19 June 2015)) for version history & list of changes in this version (and errata to published edition of the book) please see the end of this document © Copyright Irish Traditional Music Archive 2013 Online supplement to Tunes of the Munster pipers 2: Irish Traditional Music from the James Goodman Manuscripts, ed. 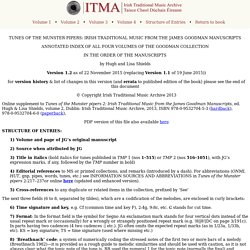 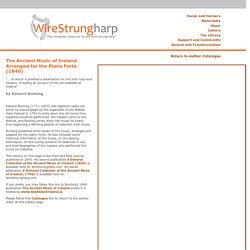 Ten harpers came to the festival, and Bunting wrote down the music he heard, thus beginning a life-long passion of collection Irish music. Bunting published three books of this music, arranged and adapted for the piano–forte. He also included some historical information on the harps, on the playing techniques, on the tuning systems he observed in use, and brief biographies of the harpers who performed the tunes he collected. The volume on this page is the third and final volume, published in 1840. His second publication A General Collection of the Ancient Music of Ireland (1809) is available here on WireStrungHarp.com. If you prefer, you may follow this link to Bunting’s 1840 publication The Ancient Music of Ireland where it is hosted by www.AskAboutIreland.ie. 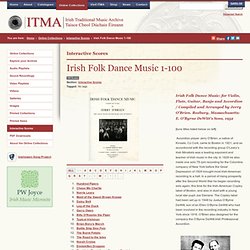 Roxbury, Massachusetts: E. O'Byrne DeWitt's Sons, 1952 [tune titles listed below on left] Accordion player Jerry O’Brien, a native of Kinsale, Co Cork, came to Boston in 1921, and as accordionist with the recording group O’Leary’s Irish Minstrels was a leading exponent and teacher of Irish music in the city. In 1928 he also made one solo 78 rpm recording for the Columbia company of New York before the Great Depression of 1929 brought most Irish-American recording to a halt. The success of O’Brien and Derrane’s Copley recordings, and their repertory, gave rise to two Boston book publications by E.

This tune book, though advertised as being suitable for several instruments, is heavily influenced by the expressive possibilities and repertory of the two-row accordion in D and C sharp, i.e., one of the two ‘press-and-draw’ systems used by accordion players in the Irish tradition. Bunting. Traditional Irish Music in Connacht. Sligo Michael Coleman (1891-1945)(Fiddle)Old 78rpm recordings of Michael Coleman in Mp3 format 78rpm History of Michael Coleman Article1 CD1 CD2 CD3 CD4 CD5 CD6 CD7 CD8 Jim Coleman (Fiddle)Reference to Jim Coleman in this Article1. 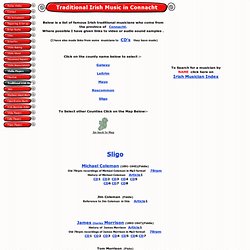 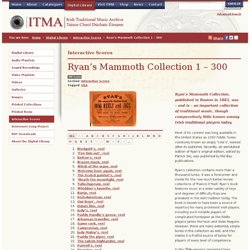 Most of its content was long available in the United States as , commonly known as simply ‘Cole’s’, named after its publisher. Recently, an annotated edition of Ryan’s original edition, edited by Patrick Sky, was published by Mel Bay publications. Ryan’s collection contains more than a thousand tunes. It was a forerunner and model for the now much better known collections of Francis O’Neill. Ryan’s book features music in a wider variety of keys and degrees of difficulty than are prevalent in the Irish tradition today. In the ITMA versions presented here, obvious mistakes and doubtful readings in the original are corrected in order to give an optimal interactive experience to you, the user.