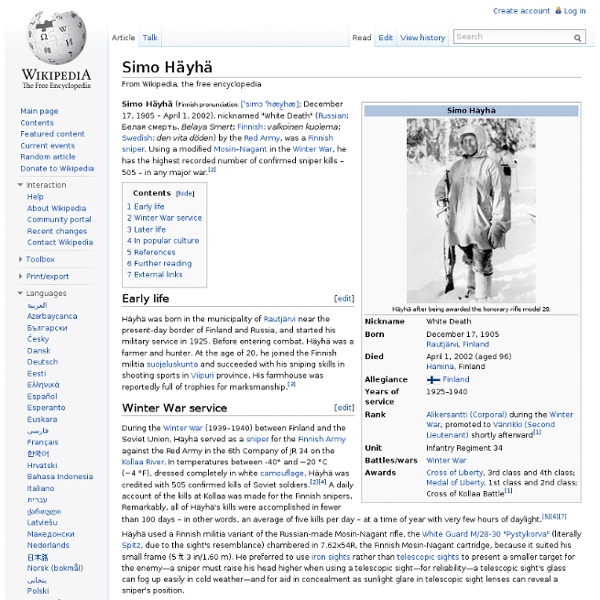 Simo Häyhä (Finnish pronunciation: [ˈsimɔ ˈhæy̯hæ]; December 17, 1905 – April 1, 2002), nicknamed "White Death" (Russian: Белая смерть, Belaya Smert; Finnish: valkoinen kuolema; Swedish: den vita döden) by the Red Army, was a Finnish marksman. Using a modified Mosin–Nagant in the Winter War, he acquired the highest recorded number of confirmed sniper kills – 505 – in any major war.[2] Early life[edit] Winter War service[edit] During the Winter War (1939–1940) between Finland and the Soviet Union, Häyhä served as a sniper for the Finnish Army against the Red Army in the 6th Company of JR 34 during the Battle of Kollaa. A "Swedish donation rifle" Simo later received as gift was a Finnish model M/28-30 but he did not use it in battle. Häyhä in the 1940s, with visible damage to his left cheek after his 1940 wound The Soviet's efforts to kill Häyhä included counter-snipers and artillery strikes, and on March 6, 1940, Häyhä was shot in his lower left jaw by a Russian soldier. Later life[edit] P.

Yogendra Singh Yadav Naib Subedar Yogendra Singh Yadav PVC is a soldier in the Indian army . He was awarded the highest Indian military honour, Param Vir Chakra for his actions during the Kargil War on 4 July 1999. Early life [ edit ] Yogendra Singh Yadav was born in Aurangabad village, Bulandshahr District, Uttar Pradesh . [ citation needed ] Career [ edit ] Kargil War [ edit ] Grenadier Yogendra Singh Yadav of the 18 Grenadiers was part of the Commando ' Ghatak ' (Deadly or Lethal) Platoon tasked to capture three strategic bunkers on Tiger Hill in the early morning hours of 4 July 1999. Yadav then charged the second bunker along with two of his fellow soldiers and engaged in hand-to-hand combat, killing four Pakistani soldiers. PVC Citation [ edit ] Grenadier Yogender Singh Yadav was part of the leading team of a Ghatak Platoon tasked to capture Tiger Hill on the night of ¾ July 1999. After the war [ edit ] Portrayal in film and media [ edit ] References [ edit ]

Operation Long Jump Operation Long Jump (German: Unternehmen Weitsprung) was a German plan to simultaneously assassinate Joseph Stalin, Winston Churchill, and Franklin Roosevelt at the 1943 Tehran Conference during World War II.[1] The operation to kill the "Big Three" Allied leaders in Iran was to be led by SS-Obersturmbannführer Otto Skorzeny from the Waffen SS. A group of agents from the Soviet Union, led by Armenian spy Gevork Vartanian, uncovered the plot before its inception and the mission was never launched.[2] The assassination plan and its disruption has been popularized by the Russian media with appearances in films and novels. The operation[edit] Beginnings[edit] According to Soviet sources, German military intelligence discovered, after breaking a U.S. Navy code, that a major conference would be held at Tehran in mid-October 1943.[3] Based on this information, Adolf Hitler approved a scheme to kill all three Allied leaders. Counter-intelligence[edit] Skorzeny in 1943 Cancellation[edit]

BBC - Female &#039;gladiator&#039; remains found in Herefordshire The archaeology team, are carefully excavating a 10-metre wide corridor Archaeologists in Herefordshire have uncovered the remains of what could possibly be a female gladiator. Amongst the evidence of a Roman suburb in Credenhill, they have found the grave of a massive, muscular woman. The archaeological Project Manager, Robin Jackson, said: "Maybe the warrior idea is one that you could pursue, I'll leave that to people's imaginations." Her remains were found in a crouched position, in what could be a suburb of the nearby Roman town of Kenchester. She was found in an elaborate wooden coffin, reinforced with iron straps and copper strips, which indicate her importance. Robin Jackson said: "When we first looked at the leg and arm bones, the muscle attachments suggested it was quite a strapping big bloke, but the pelvis and head, and all the indicators of gender, say it's a woman." An offering of beef and a fired pot were also found in the grave, and she was buried on top of a base of gravel.

File:Attack on Hamburg.jpg Jack Churchill Churchill stares down the barrel of a captured Belgian 75 mm field gun. Early life[edit] Second World War[edit] Churchill resumed his commission after Poland was invaded. In May 1940 Churchill and his unit, the Manchester Regiment, ambushed a German patrol near L'Epinette, France. Churchill was second in command of No. 3 Commando in Operation Archery, a raid on the German garrison at Vågsøy, Norway on 27 December 1941.[10] As the ramps fell on the first landing craft, Churchill leapt forward from his position playing "March of the Cameron Men"[11] on his bagpipes, before throwing a grenade and running into battle in the bay. Jack Churchill (far right) leads a training exercise, sword in hand, from a Eureka boat in Inveraray. In September 1944 Churchill and a Royal Air Force officer crawled under the wire, through an abandoned drain and attempted to walk to the Baltic coast. Later life[edit] Family[edit] Notes[edit] References[edit]

Ernst Kaltenbrunner Ernst Kaltenbrunner (4 October 1903 – 16 October 1946) was an Austrian-born senior official of Nazi Germany during World War II. An Obergruppenführer (general) in the Schutzstaffel (SS), between January 1943 and May 1945 he held the offices of Chief of the Reichssicherheitshauptamt (RSHA, Reich Main Security Office) and President of the ICPC, later to become Interpol. He was the highest-ranking member of the SS to face trial at the first Nuremberg Trials. He was found guilty of war crimes and crimes against humanity and executed. Early life[edit] SS career[edit] World War II[edit] Kaltenbrunner with Himmler and Ziereis In July 1940, he was commissioned as a SS-Untersturmführer in the Waffen-SS Reserve.[5] Later in April 1941, he was promoted to major general (Generalleutnant) of the Police. In December 1944, Kaltenbrunner was granted the rank of General of the Waffen-SS. On 18 April 1945, Himmler named Kaltenbrunner Commander-in-Chief of those remaining German forces in Southern Europe.

Alcibiades Alcibiades, son of Cleinias, from the deme of Scambonidae (/ˌælsɨˈbaɪ.ədiːz/;[1] Greek: Ἀλκιβιάδης Κλεινίου Σκαμβωνίδης, transliterated Alkibiádēs Kleiníou Skambōnidēs; c. 450 – 404 BC), was a prominent Athenian statesman, orator, and general. He was the last famous member of his mother's aristocratic family, the Alcmaeonidae, which fell from prominence after the Peloponnesian War. He played a major role in the second half of that conflict as a strategic advisor, military commander, and politician. During the course of the Peloponnesian War, Alcibiades changed his political allegiance on several occasions. In his native Athens in the early 410s BC, he advocated an aggressive foreign policy, and was a prominent proponent of the Sicilian Expedition, but fled to Sparta after his political enemies brought charges of sacrilege against him. In Sparta, he served as a strategic adviser, proposing or supervising several major campaigns against Athens. Early years[edit] Rise to prominence[edit]

File:World War I Observation Balloon HD-SN-99-02269.JPEG Audie Murphy Audie Leon Murphy (June 20, 1925 – May 28, 1971) was one of the most famous and decorated American combat soldiers of World War II . He served in the Mediterranean and European Theater of Operations where he was presented the Medal of Honor and several other decorations for heroism in combat including decorations from France and Belgium . He was born into poverty on a farm in northeast Texas and was named for two family friends who kept the Murphys from starving. Murphy lied about his age to enlist in the military and follow his dream of becoming a soldier. He was only 19 years old when he was awarded the Medal of Honor. Murphy always maintained that the medals belonged to his entire military unit. In his postwar civilian life, Murphy enjoyed a two-decade career as actor. Early life [ edit ] She died when I was sixteen. Military service [ edit ] The death of Murphy's mother added even more impetus to his ambition to become a soldier. Mediterranean Theater [ edit ] North Africa [ edit ]