Demon-slaying Dojigiri, one of Japan’s Five Swords Under Heaven, now on display at Kasuga Shrine. Islamic Arms and Armor. Terry Lim's Kali Seminar with Maurice Ruiz and Ben Poon - Arnis. Arnis, also known as Kali or Eskrima, is the national sport and martial art of the Philippines.[2] The three are roughly interchangeable umbrella terms for the traditional martial arts of the Philippines ("Filipino Martial Arts", or FMA) that emphasize weapon-based fighting with sticks, knives, bladed weapons, and various improvised weapons as well as "open hand" or techniques without weapons. 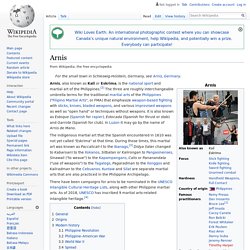 It is also known as Estoque (Spanish for rapier), Estocada (Spanish for thrust or stab) and Garrote (Spanish for club). In Luzon it may go by the name of Arnis de Mano. The indigenous martial art that the Spanish encountered in 1610 was not yet called "Eskrima" at that time. There have been campaigns for arnis to be nominated in the UNESCO Intangible Cultural Heritage Lists, along with other Philippine martial arts. As of 2018, UNESCO has inscribed 9 martial arts-related intangible heritage.[4] General[edit] Origins[edit] What sword is this? Mrbsct, this question had me researching all around the internet for many hours, I don't know if I should thanks you or hate you. 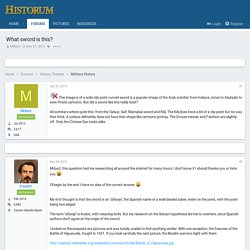 Ten Legendary Swords from the Ancient World. Swords are not only weapons, but symbols of great power, used over the centuries as offerings, in ceremonies, for coronations, and as precious items for trade. 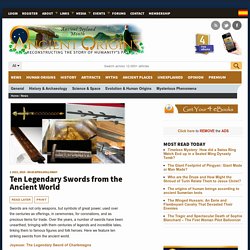 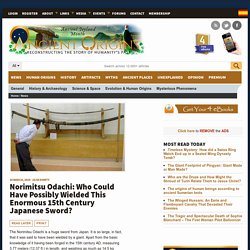 It is so large, in fact, that it was said to have been wielded by a giant. A Brief Guide to Medieval Swords [Infographic] The Curious Case of the Weapon that Didn’t Exist. 10 Fascinating Knives From World History. Andyalm. Artist Asks For Cool Sword Designs and the Replies Are Rad as Hell. Cartoonist and Game Dev Matthew Wills has been on a bit of a... sword kick recently. 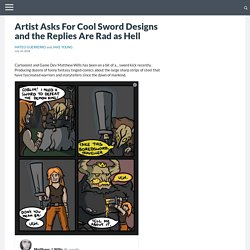 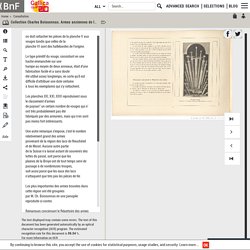 Acinaces. The acinaces, also spelled akinakes (Greek ἀκῑνάκης) or akinaka (unattested Old Persian *akīnakah, Sogdian kynʼk) is a type of dagger or short sword used mainly in the first millennium BC in the eastern Mediterranean region, especially by the Medes,[1] Scythians and Persians, then by the Greeks.[2] The acinaces is of Scythian origin, but was made famous by the Persians, and rapidly spread throughout the ancient world. 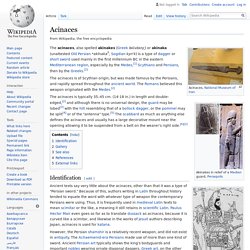 The Romans believed this weapon originated with the Medes.[2] Identification[edit] A.G.'s Knife Encyclopedia. When I first composed this FAQ or The Knife Encyclopedia I filled it with information that I thought was unknown to most people, even those who really liked knives. 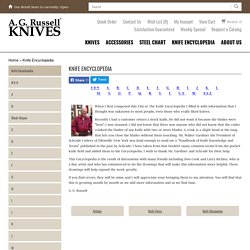 Recently I had a customer return a stock knife, He did not want it because the blades were "bent", I was stunned, I did not know that there was anyone who did not know that the cutler crinked the blades of any knife with two or more blades. A crink is a slight bend at the tang that lets you close the blades without them touching. Mr. Walter Gardiner the President of Schrade Cutlery of Ellenville New York was kind enough to send me a "Handbook of Knife Knowledge and Terms" published in the past by Schrade.

Authentic Medieval Sword Techniques. Documenting the dynamics of swords. This page is an introduction to the Weapon Dynamics Computer, a tool designed to document the dynamic properties of swords and other hand-held weapons. 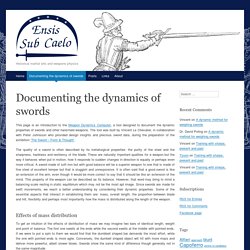 This is kung-fu - EmeiCi. Welcome to the Official Web Site of Burger Sword Canes-Walking Sticks. The 400-year-old Styrian Armoury is the largest historic armory in the world. Comprehensive list of historical Polearms and their usage. The macuahuitl was a sword with obsidian blades used mostly by the Aztecs. It was sharp enough to decapitate a man, and even a horse. That is not a broadsword! – Ed McDonald. In recent days, there appears to be a growing interest in presenting historical realism into fantasy writing. 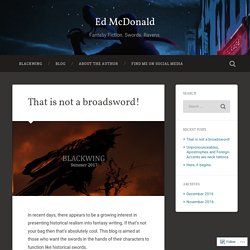 If that’s not your bag then that’s absolutely cool. Back to the source - Historical European Martial Arts documentary (old version) Documentary Proves Sword Fights Look Nothing Like Hollywood. After a successful Kickstarter campaign, photographer and videographer Cédric Hauteville has released his feature-length documentary about the world of historical European martial arts. The film, Back to the Source, takes a look at a popular organization that combines training and practice in historically accurate swordsmanship with a quest for knowledge and understanding of historical combat. On Flipboard. The macuahuitl was a sword with obsidian blades used mostly by the Aztecs. It was sharp enough to decapitate a man, and even a horse. Art of Swords. Art of Swords. Permalink Presentation Knife. A Step Closer to the Mysterious Origin of the Viking Sword Ulfberht.

By Tara MacIsaac, Epoch Times Ulfberht was like a Medieval luxury brand for swords—but unlike your Gucci purse, the swords were of such high quality they were almost … mystical. An Introduction to the Sword. An Introduction to the Sword: Part I Page 1 of 2 — Go to: 12Next The sword is an edged weapon with a long blade designed for delivering cutting blows or thrusts, or both.

It first appeared in the prehistoric period; once copper had been mastered, the dagger was fitted with an increasingly longer blade, until it became in effect a short sword. History of fencing: Geometrical images of sword-fighting by Gerard Thibault. The Vault is Slate's history blog. Like us on Facebook, follow us on Twitter @slatevault, and find us on Tumblr. All Ninja Gear: Largest Selection of Ninja Weapons. Authentic, Sharp, Real Ninja Throwing Stars From traditional to unique and everything in between, All Ninja Gear offers you a star to match your every ninja need! Featured products. Throwing Knife - Redline Throwers w/ Arm Sheath. Rapier hidden in a snake bracelet. Baltimore Knife & Sword. To place an order please email us @ We are a verified Paypal dealer and we accept most major credit cards Check out our videos here. Sword porn mega album.