Irish Potato Famine: The Blight Begins. The Famine began quite mysteriously in September 1845 as leaves on potato plants suddenly turned black and curled, then rotted, seemingly the result of a fog that had wafted across the fields of Ireland. 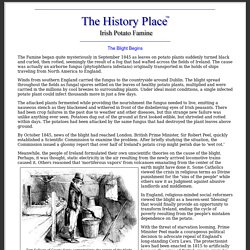 The cause was actually an airborne fungus (phytophthora infestans) originally transported in the holds of ships traveling from North America to England. The Irish Famine - History Matters 365. Episode 1 - Blighted Nation - RTÉ Radio 1. Death by Starvation It’s estimated at that 3 out of every 5 who died were under the age of 10 or over 60. 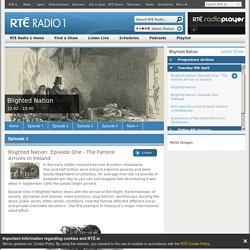 Aonghus McAnally read a medical account of the reality of death by starvation. Death by Disease Most vulnerable people succumbed to disease rather than starvation as Dr. Laurence Geary of UCC vividly explained to us. Met Eireann Weather Forecast from 1848 Many people had pawned their winter clothes to buy food which left the evicted pitifully exposed to the elements. The winter of 1847/48 was a particularly harsh one. Virtual Tour of a Famine Workhouse The dreaded workhouses are a potent symbol of the famine. Famine graves in Skibbereen There are between 8,000 and 10,000 people buried in a mass grave in Skibbereen. People Burying Themselves There are also accounts of people burying themselves alive. Charity from Abroad Private charitable donations during the Famine were the first examples in world history of a major international relief effort. Ireland massgraves.gif (GIF Image, 797 × 968 pixels) 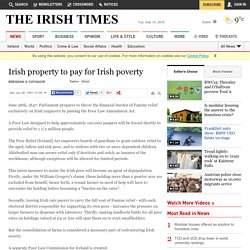 A Poor Law designed to help approximately 100,000 paupers will be forced shortly to provide relief to 1 1/2 million people. The Poor Relief (Ireland) Act empowers boards of guardians to grant outdoor relief to the aged, infirm and sick poor, and to widows with two or more dependent children. Ablebodied man can secure relief only if destitute and solely as inmates of the workhouse, although exceptions will be allowed for limited periods. Enhanced British Parliamentary Papers On Ireland. Scan Transcript ^^CajSKs^, \ POTATO CROP. 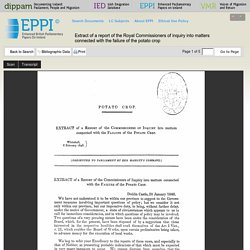 Young Ireland, a group of dedicated nationalists, had been at work before the Famine, and had decided to join O’Connell’s Repeal Association. 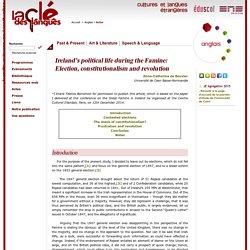 They had tactical motivations in doing so: O’Connell was then a popular hero and a mover of crowds, with a nationwide and popular audience they could not hope to achieve by themselves. They also had some fascination for the Repeal association as a formidable instrument of crowd gathering and crowd discipline, for the “sobering effect” of the Association. This how Sir Charles Gavan Duffy retrospectively and negatively defines the beliefs of Thomas Davis, the founder of the movement; he argues that Davis raged against the dominant ideology of the day, defined as Modern Anglicanism i.e.

What Young Ireland opposed is as clear as it is sweeping, and could be summed up as “Anglo-Saxon materialism”, largely though not exclusively embodied and typified by the Whigs; this was the Carlylean trend in the movement’s ideology. Asenath Nicholson and the Great Famine (Part 1) Nicholson’s curiosity and outspokenness were probably a trial to people she met; however, one can be certain that her only revolutionary idea was her egalitarianism. 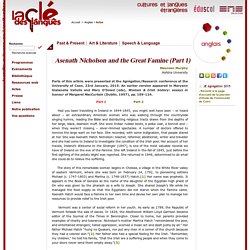 For Nicholson, it was tolerance and charity that counted, and she records with approval the evangelists working among the poor without regard to their willingness to convert, the instances of cooperation between Catholic and Protestant clergy, and the work of Catholic religious among the poor. Reaction to Nicholson was – above all – curiosity. She often complained of people staring at her, but she was an unusual sight. They wondered why she had travelled so far and usually attributed her presence among them to one of two traditional notions: to the saint’s visit or to the penitential pilgrim.

“It was difficult,” she said, “to make them believe I was not some holy St Brigid going on penance.”[12] Both ideas, favorite themes in medieval literature, were part of the folklore of the Irish countryside.