5 Real Life Soldiers Who Make Rambo Look Like a Pussy 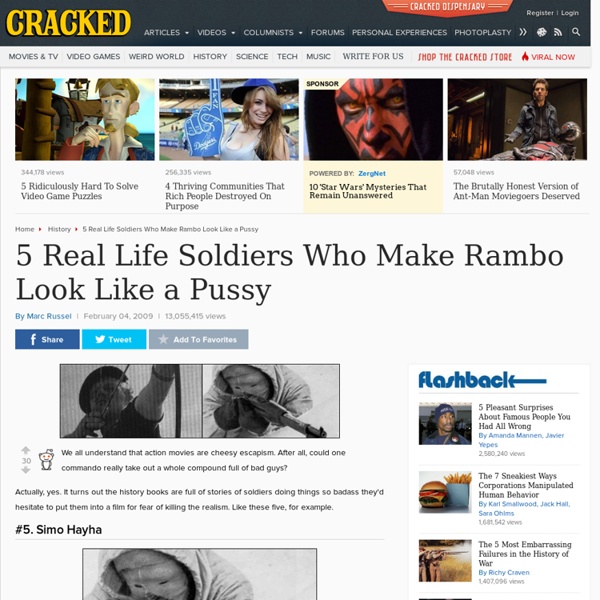 We all understand that action movies are cheesy escapism. After all, could one commando really take out a whole compound full of bad guys? Actually, yes. It turns out the history books are full of stories of soldiers doing things so badass they'd hesitate to put them into a film for fear of killing the realism. Like these five, for example. #5. Who Was He? Simo Hayha had a fairly boring life in Finland. Since the majority of fighting took place in the forest, he figured the best way to stop the invasion was to grab his trusty rifle, a couple of cans of food and hide in a tree all day shooting Russians. Can you spot Hayha? Of course when the Russians heard that dozens of their men were going down and that it was all one dude with a rifle, they got fucking scared. They started by sending out a task force to find Hayha and take him out. Then they tried getting together a team of counter-snipers (which are basically snipers that kill snipers) and sent them in to eliminate Hayha. #4. Exactly.

Hinduism About Hinduism: Oldest of the world's major religions. It evolved from the Vedic religion of ancient India. Though the various Hindu sects each rely on their own set of scriptures, they all revere the ancient Vedas, which were brought to India by Aryan invaders after 1200 BC. The philosophical Vedic texts called the Upanishads explored the search for knowledge that would allow mankind to escape the cycle of reincarnation. Armored Personnel Unit - Matrix Wiki - Neo, Trinity, Wachowski Brothers The Armored Personnel Unit (commonly referred to as APU) was first seen in The Matrix Reloaded, but mostly seen in The Matrix Revolutions. They are hydraulic power battle suits designed for combat and defense of Zion. More than 120,000 units were produced, however by the time of the Battle of Zion, only 350 remain (although in screen when Mifune gives his speech there are only around 70 APUs present).

frontline: hunting bin laden Osama bin Laden is charged with masterminding the 1998 bombings of two U.S. embassies in East Africa, believed to have had a role in the October 2000 attack on the USS Cole in the Yemeni port of Aden, and now is a prime suspect in the Sept. 11, 2001 destruction of the World Trade Center and the bombing of the Pentagon. This report features reporting by a Pulitzer-Prize nominated team of New York Times reporters and FRONTLINE correspondent Lowell Bergman. Tracing the trail of evidence linking bin Laden to terrorist attacks, this updated report includes interviews with Times reporters Judith Miller and James Risen and former CIA official Larry Johnson. They discuss the terrorist attacks which are linked, or are likely linked, to bin Laden's complex network of terrorists, outline the elements of his international organization and details of its alliances and tactics, and address the challenges confronting U.S. intelligence in trying to crack it.

Reasons it's good to be a man This has been sitting on my hard drive in one form or another for years. I don't have an attribution for it. It appeared in a number of emails over the years. I don't claim that its original. The Ajanta Caves – Ancient Temples Carved from Rock Two thousand two hundred years ago work began on an extensive series of cave monuments in Maharashtra, India. Over a period of hundreds of years, thirty one monuments were hewn piece by piece from the rock face. Then, some speculate around the year 1000AD, they fell in to disuse. Dense jungle grew around, hiding the caves away from human eyes. Sherilyn Hyde Sherilyn Hyde (シェリリン・ハイド, Shieririn Haido?) is a fictional character in the side stories of Mobile Suit Gundam 00. Sherilyn is a MS mechanic and a disciple of Ian Vashti for working for Celestial Being's Fereshte. Personality & Character

Seth Howard Sgt. Seth E. Howard On the morning of 6 April 2008, a pair of American Chinook helicopters zoomed in low over the Shok Valley in the unforgiving mountains of rural Afghanistan. This impenetrable, rocky ravine was unfamiliar and unfriendly territory to the Western powers – a heavily-fortified network of caves laced the canyon walls, concealing a massive network of terrorist freedom-and-pie-hating insurgents from the prying eyes of Allied warplanes and satellites. No NATO force had ever dared venture into this daunting region, and even the Soviets had been repeatedly turned away from this area by determined Mujahedeen fighters when the Russkies had launched their ill-fated invasion in the 80s.