How Steve Whetman created a unique (and powerful!) indoor weapon SFX library: There are lots of excellent weapon sound effects libraries out there – but weapons SFX libraries that are recorded indoors are incredibly hard to come by. 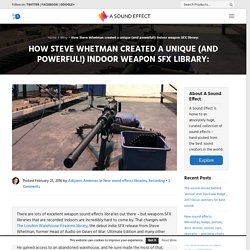 That changes with The London Warehouse Firearms library, the debut indie SFX release from Steve Whetman, former Head of Audio on Gears of War: Ultimate Edition and many other projects. Sounds of Star Wars Battlefront: Part I. The five man sound design team working together at DICE have had a blast working on Star Wars™ Battlefront™! 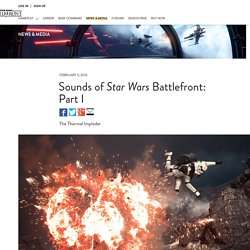 We asked each of them to tell us one of the stories behind some of their, and your, favorite sounds in the game. First up is David Jegutidse, Sound Designer, who will talk about the sound of the Thermal Imploder. DAVID JEGUTSIDE: When we first talked about adding the Thermal Imploder to the game, and discussing how it would function and look, it immediately became clear that it would be a very interesting creative challenge and an opportunity to add something unique and recognizable to the soundscape of the Star Wars universe. Indiana Punch Sounds Tutorial — The Sound Keeper. 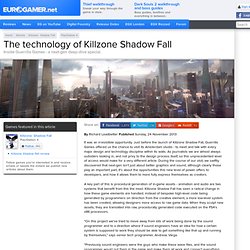 Just before the launch of Killzone Shadow Fall, Guerrilla Games offered us the chance to visit its Amsterdam studio - to meet and talk with every major design and technology discipline within its walls. As journalists we are almost always outsiders looking in, and not privy to the design process itself, so this unprecedented level of access would make for a very different article. During the course of our visit, we swiftly discovered that next-gen isn't just about better graphics and sound, although clearly those play an important part; it's about the opportunities this new level of power offers to developers, and how it allows them to more fully express themselves as creators. A key part of this is procedural generation of in-game assets - animation and audio are two systems that benefit from this the most. One step beyond 'HDR' audio. Natural and believable. The Sounds of Violence. This past March, NPR’s “On The Media” ran a segment on the changing standards for how violence is portrayed in film—not in terms of how graphically it’s visualized, but how moist it sounds today compared to the dry, cracking punches of early crime fights. 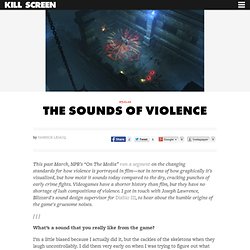 Videogames have a shorter history than film, but they have no shortage of lush compositions of violence. I got in touch with Joseph Lawrence, Blizzard's sound design supervisor for Diablo III, to hear about the humble origins of the game's gruesome noises. What’s a sound that you really like from the game? I’m a little biased because I actually did it, but the cackles of the skeletons when they laugh uncontrollably. I did them very early on when I was trying to figure out what those guys sounded like. The Road to Battlefield 4: Sounds of the Battlefield. 10.24.13 [DICE] SlyOkapi | 46 comments. 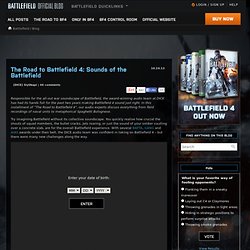 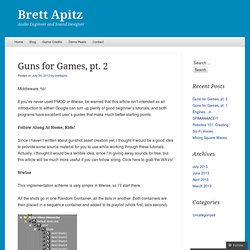 If you’ve never used FMOD or Wwise, be warned that this article isn’t intended as an introduction to either! Google can turn up plenty of good beginner’s tutorials, and both programs have excellent user’s guides that make much better starting points. Follow Along At Home, Kids! Since I haven’t written about gunshot asset creation yet, I thought it would be a good idea to provide some source material for you to use while working through these tutorials.

Actually, I thought it would be a terrible idea, since I’m giving away sounds for free, but this article will be much more useful if you can follow along. Wwise This implementation scheme is very simple in Wwise, so I’ll start there. All the shots go in one Random Container, all the tails in another. Sequence Settings: “Sample accurate” is the magic setting here. Shots Settings: Creating an Attack-Sustain-Release Effect. Scenario Imagine a weapon that has two elements: An individual fire sound for every shot fired (several a second), and A barrel “spin up”, “spin loop”, and “spin down” sound. 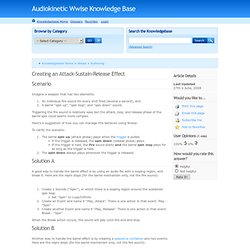 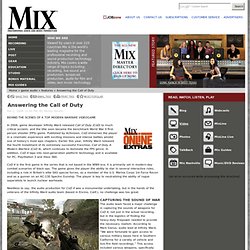 Published by Activision, CoD immerses the player in a cinematic experience with exciting missions and intense battles amidst one of history's most epic chapters. Earlier this year, Infinity Ward released the fourth installment of its extremely successful franchise, Call of Duty 4: Modern Warfare (CoD 4), which continues to dominate the FPS genre. In addition, CoD 4 taps into next-generation platform technology and is available for PC, PlayStation 3 and Xbox 360. CoD 4 is the first game in the series that is not based in the WWII era; it is primarily set in modern-day combat scenarios of black ops. When it came time to record small arms, the team held two recording sessions: one in Nevada and another along the California/Mexico border. Assassin's Creed 3 - Recording Weapons for the video game. The Sound Design of Battlefield 3 - Game Informer. Battlefield 3 vs. Modern Warfare 3 – Gun Sounds. Posted by lostchocolatelab on Monday, November 14, 2011 · 28 Comments. 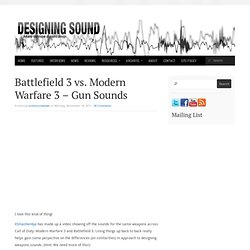 Battlefield 3 gun sounds vs Modern Warfare 3. Gadgets, Guns, And Devils: The Sound Design Of Halo 4 - Features. Not only is Halo 4 starting anew for the music of the game, but the audio team led by Sotaro Tojima is hard at work amassing a gigantic library of sound effects for the new game. 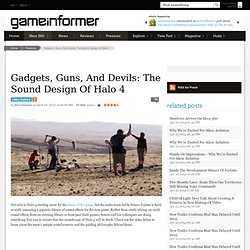 Rather than overly relying on stock sound effects from an existing library or from past Halo games, Sotaro and his colleagues are doing everything they can to ensure that the soundscape of Halo 4 will be fresh. Check out the video below to learn about the team's unique sound sources and the guiding philosophy behind them. To learn more about Halo 4, click on the link to our content-filled hub below.