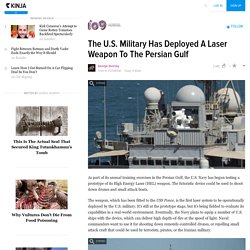 An experienced shooter using the technology demonstration system repeatedly hit moving and evading targets. Additionally, a novice shooter using the system for the first time hit a moving target. This video shows EXACTO rounds maneuvering in flight to hit targets that are moving and accelerating. EXACTO’s specially designed ammunition and real-time optical guidance system help track and direct projectiles to their targets by compensating for weather, wind, target movement and other factors that can impede successful hits.

“True to DARPA’s mission, EXACTO has demonstrated what was once thought impossible: the continuous guidance of a small-caliber bullet to target,” said Jerome Dunn, DARPA program manager. Electrodes trigger out-of-body experience. ​If You Touch This Plant It Will Make You Vomit In Pure Agony. AUSTRALIA: Where nature hates your guts! 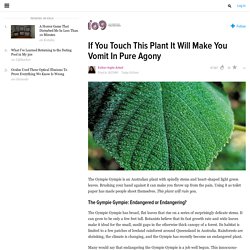 Flagged A good friend of mine mentioned (on several occasions) that if the world ever started to end, he would head to Australia as fast as possible. He couldn't believe that I thought it was a bad idea. Yeah, I'm not going to a place where even something like the platypus if venomous. Yeah, but... I mean, if you were worried about being attacked, the best defense would be to let your environment do the dirty work. There is that, but I trust myself to survive against other humans, and not whatever the land down under will throw at me. Watch as scientists levitate these objects with sound waves. 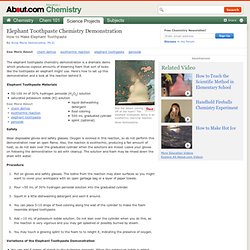 Here's how to set up this demonstration and a look at the reaction behind it. Elephant Toothpaste Materials 50-100 ml of 30% hydrogen peroxide (H2O2) solution saturated potassium iodide (KI) solution liquid dishwashing detergent food coloring 500 mL graduated cylinder splint (optional) Safety Wear disposable gloves and safety glasses. Oxygen is evolved in this reaction, so do not perform this demonstration near an open flame. Procedure Put on gloves and safety glasses. Variations of the Elephant Toothpaste Demonstration You can add 5 grams of starch to the hydrogen peroxide. The overall equation for this reaction is: Disposable Cameras. There are lots of disposable camera Instructables on the site. 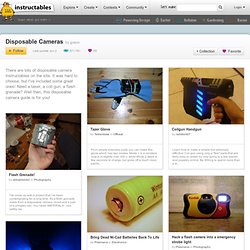 It was hard to choose, but I've included some great ones! Need a taser, a coil gun, a flash grenade? Well then, this disposable camera guide is for you! From simple everyday parts you can make this glove which has two modes. Mode 1 is a constant output of slightly over 300 v. while Mode 2 takes a few seconds to charge, but gives off a much more painfu...

Learn how to make a simple but extremely effective Coil gun using only a "few" parts that are fairly easy to obtain by only going to a few places and possibly online. I've come up with a project that i've been contemplating for a long time. Are you tired of having your Ni-Cad batteries that refused to charge and simply die? Well... Caution I'm not liable if your shock yourself and injury or kill your self, working with high voltages can be dangerous!! Check Out This Insanely Dangerous Zinc Flamethrower. Esther, as a veteran I take issue with the assumption the flamethrower wasn't used for safety reasons. 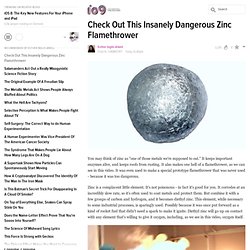 We're all reasonable adults here, I'm sure it was just too expensive. It was probably scrapped for a lot of reasons, but I think safety was probably up there. I don't think the main problem would be people playing around with it. I think the main problem would be if, for example, people were transporting it in a car and got into an accident (or were attacked), even the slightest crack in one package of the diethyl zinc would make the entire car burst into flames. To all serious replies this comment receives, I'm just gonna go ahead and apologize: I've been posting on Gawker and my nerd-sarcasm unit has been malfunctioning as a result. I'm 100% this wasn't cost issue, but rather a matter of safety and practicality.