Bosmer Ceremonial Armor by Calyps at Skyrim Nexus. My biggest problem with armor mods for skyrim is that (probably) every one I've seen uses resources from armors in the vanilla game, which is the biggest thing keeping me from installing any of them. 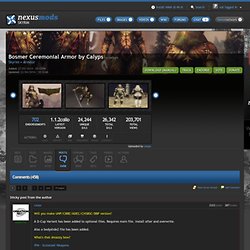 Nothing like seeing thumbnails of what appears to be a decent armor, only to see that it took bits from iron, daedric, dragon, etc sets patched into something else. This armor doesnt appear to do any of that. Awesome to see some real work done here, especially having read into what the creation process entailed (ex. the insane number of dirt/weathering layers! .That being said, I wont be using this mod in its current state. 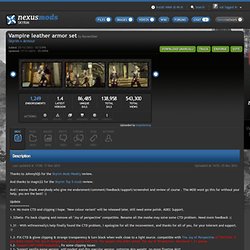 And thanks to magic22 for the Skyrim Top 5 mods review. And I wanna thank everybody who give me endorsment/comment/feedback/support/screenshot and review of course . The MOD wont go this far without your help, you are the best! :) Update===========1.4- No more CTD and clipping I hope. 1.32beta- Fix back clipping and remove all "Joy of perspective" compatible. 1.31 - With wtfmanreally's help finally found the CTD problem, I apologize for all the inconvenient, and thanks for all of you, for your tolerant and support. :) 1.3- FIX CTD & glove clipping & strange transparency & turn black when walk close to a light source. compatible with The Joy of Perspective ATTENTION: If you didnt install The Joy of Perspective, your game will CTD.

Kitten by Neo - Dream Girl and UNPBB BBP TBBP at Skyrim Nexus. TERA Armors Collection for Skyrim - Male and UNP female at Skyrim Nexus. The Mage robes in this mod are classified as "cloth" but show up as "light armors" in game. 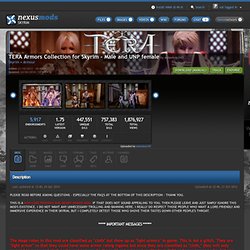 This is not a glitch. They are "light armor" so that they could have some armor rating ingame but since they are classified as "cloth," they will only respond to mage and cloth perks, not armors. So they will not get any benefits from light or heavy armor perks, but you can still wear them and get the bonuses from spells such as Stone Flesh. All of the "Helmet" and "Hood" in this mod except one are supposed to be invisible. You will not see anything show up when you equip these head gears. DO NOT DROP THESE ARMORS FROM YOUR INVENTORY - these armors' world model are incomplete and will cause issues when they are dropped. I will NOT convert these armors to any other body (LB, UNBP, ADEC, etc.), so please do not ask.

Selene by Neo at Skyrim Nexus. Neo's Selene Author : Meister aka Neovinci A simple outfit set.Yes same as you recognize, it is Selene's outfit set in the movie "Underworld". 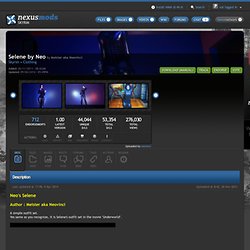 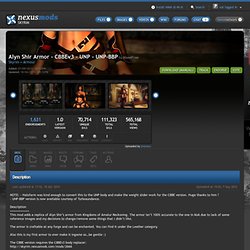 Huge thanks to him ! - UNP-BBP version is now available courtesy of Turbosundance. Description===========This mod adds a replica of Alyn Shir’s armor from Kingdoms of Amalur Reckoning. The armor isn’t 100% accurate to the one in KoA due to lack of some reference images and my decisions to change/remove some things that I didn’t like. Northgirl Armor UNP and the Retexture from clethcleth and Gamwich at Skyrim Nexus. Demon Hunter Armor - CBBEv3 and UNP at Skyrim Nexus. *** An optional black texture has been added. 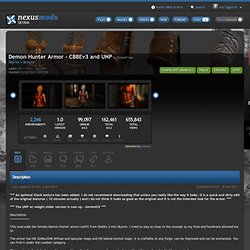 I do not recommend downloading that unless you really like the way it looks. It is a quick and dirty edit of the original textures ( 10 minutes actually ) and I do not think it looks as good as the original and it is not the intended look for the armor. *** *** The UNP w/ weight slider version is now up. Description=========== This mod adds the female Demon Hunter armor/outfit from Diablo 3 into Skyrim. The armor has HD 2048x2048 diffuse and specular maps and HD baked normal maps. This version is final, looks good to me and I won't make anymore changes to it or add anything unless it is highly requested. The armor requires the CBBEv3 or UNP body replacer: You can preview the armor in 3D here:*Note: Textures are resized to 1024x1024 so it doesn't look as good, but it is still a fairly accurate representation DemonHunterArmor (View in 3D) DemonHunter Boots (View in 3D) DemonHunter gloves (View in 3D) P.S. 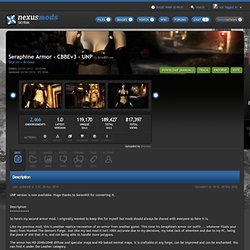 Huge thanks to Seren4XX for converting it. Description=========== So here's my second armor mod. I originally wanted to keep this for myself but mods should always be shared with everyone so here it is. Like my previous mod, this is another replica/recreation of an armor from another game. The armor has HD 2048x2048 diffuse and specular maps and HD baked normal maps. And one last thing before anyone askes me: NO, I will NOT make the cape/cloak thingy, I don't like it and I don't have the time, so don't bother asking for it. The CBBE version requires the CBBEv3 body replacer: The UNP version requires the UNP body replacer: Install======= 1.Extract the archive2.Copy the contents of the archive in your SkyrimData folder3.Open the Skyrim launcher and check the SeraphineHuntedArmor.esp in the Data Files section Uninstall========= 1.Uncheck the esp plugin2.Delete all files that came with the mod Known Issues============ Credits======= Tools Used========== 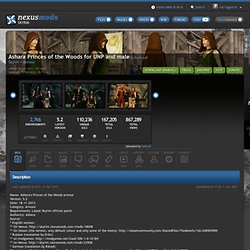 The armour is composed of 17 different pieces, 6 fur complements plus a wig for the hood that can be created at any normal forge and are found under the Studded section (I've changed the section where items are shown from Leather to Studded as the Leather one is really crowded in my game). All pieces are upgradable at workbenches and fully enchantable. The ratings for Bodice, Boots and Bracers are those of Dragonscale armour except the weight that is the one of the elven armour. Witch Armour by Neo CBBE UNP at Skyrim Nexus. Devilmaid by Neo - ver Public at Skyrim Nexus. 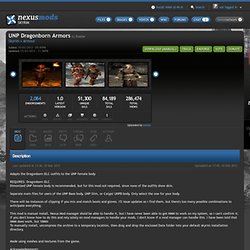 Separate main files for users of the UNP Base body, UNP Slim, or Calyps' UNPB body. Only select the one for your body. There will be instances of clipping if you mix and match boots and gloves. I'll issue updates as I find them, but there's too many possible combinations to anticipate everything. This mod is manual install. Made using meshes and textures from the game..Acknowledgements: Dimon99 for the UNP bodiesCalps for the UNPB bodyBethesda for the game. UNP Female Armors at Skyrim Nexus. Mord Sith Cara at Skyrim Nexus.