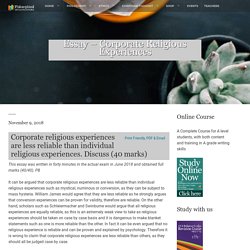 In fact it can be even argued that no religious experience is reliable and can be proven and explained by psychology. Corporate religious experiences are those that happen to a group of people as a body. Humans believe in GOD because religion fulfills our 16 basic desires. The creation of the universe According Gerald Schroeder believes time when the universe was created was about a trillion times slower, due to what he calls the 'stretching factor' in Einstein's equations. 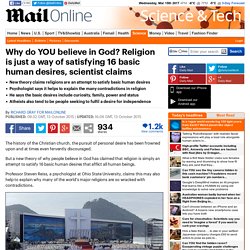 Einstein's model of 'general relativity,' the faster things go, the slower time moves. And Schroeder says because light moves so fast, it affects time. Schroeder argues this might explain how God could have created the universe in six days - each of the creator's days lasted 24 trillion hours. This would be about 14 billion years. Life on Earth came out of clay The Bible, Koran and even Greek mythology claim that all life on Earth came from clay. A study in 2013 attempted to back up these claims. The process takes billions of years, during which the chemicals react to each other to form proteins, DNA and, eventually, living cells, scientists told the journal Scientific Reports. Adam and Eve He used a complicated mathematical model to work backwards through our DNA genealogy. Religious Experience - Philosophical Investigations.

Religious experience is a good pointer to the existence of God! Discuss (40) James Martin, S.J.: Have you ever had a mystical experience? a2-level-level-revision, religious-studies, philosophy-religion, religious-experience, william-james-argument. William James was a philosopher and psychologist from New York City. 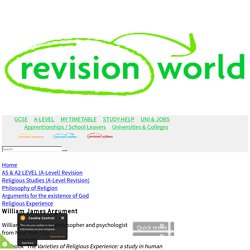 His book ‘The Varieties of Religious Experience: a study in human nature’ summarises the author’s ‘Gifford Lectures’ (renowned lectures in natural theology- based on reason and ordinary experience) given in 1902 in Edinburgh - It has been argued to be the most important book ever written on the topic of religious experience. In it, James aims to survey the various types of religious experience as a psychologist and to present the findings of this survey and its implications for philosophy. He used a variety of case studies of first-hand religious experience in the words of the people who told him their stories such as a homeless drunken man who “seemed to feel some great and mighty presence. I did not know then what it was. 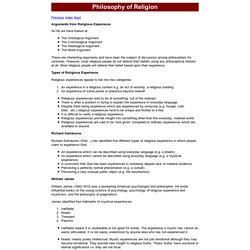 However, most religious people do not defend their beliefs using any philosophical rhetoric at all. Most religious people will defend their belief based upon their experience. Challenges to Religious Experiences from Freud and Marx. Swinburne response to Challenges. How the church determines a true Marian apparition. A pilgrim walks on her knees at the Marian shrine of Fatima in central Portugal in 2015. 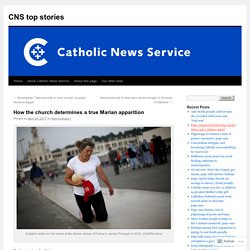 (CNS/Reuters) By Junno Arocho Esteves Catholic News Service VATICAN CITY (CNS) — When it comes to Marian apparitions, the Catholic Church takes a prudent approach that focuses more on the message than the miracle. Supernatural phenomena, like the alleged miracle of the sun in Fatima, Portugal, nearly 100 years ago, are not the primary factors in determining an apparition is worthy of belief. William James, part 1: A religious man for our times. William James, part 2: The scientific study of religion. The Scotsman of May 1901 records how William James began the lectures that became The Varieties of Religious Experience, "in the English class-room of [Edinburgh] University, where a crowded audience assembled". 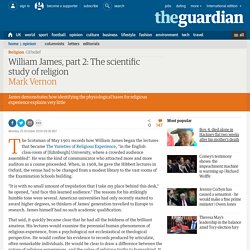 He was the kind of communicator who attracted more and more auditors as a course proceeded. When, in 1908, he gave the Hibbert lectures in Oxford, the venue had to be changed from a modest library to the vast rooms of the Examination Schools building. "It is with no small amount of trepidation that I take my place behind this desk," he opened, "and face this learned audience. " William James, part 4: The psychology of conversion. The case of Stephen H Bradley, reported by William James in The Varieties of Religious Experience, is arresting. 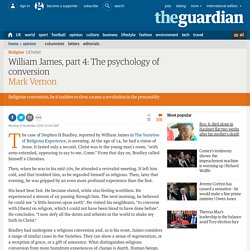 At the age of 14, he had a vision of Jesus. It lasted only a second. Christ was in the young man's room, "with arms extended, appearing to say to me, Come. " From that day on, Bradley called himself a Christian. Then, when he was in his mid-20s, he attended a revivalist meeting. His heart beat fast. Bradley had undergone a religious conversion and, as is his wont, James considers a range of similar cases in the Varieties. William James, part 6: Mystical experience. Mysticism is a crucial aspect of the study of religion. 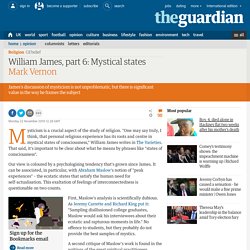 "One may say truly, I think, that personal religious experience has its roots and centre in mystical states of consciousness," William James writes in The Varieties. That said, it's important to be clear about what he means by phrases like "states of consciousness". Our view is coloured by a psychologising tendency that's grown since James. It can be associated, in particular, with Abraham Maslow's notion of "peak experiences" – the ecstatic states that satisfy the human need for self-actualisation. Pope Francis to canonise two children at Portugal's Fatima shrine. Image copyright AFP/Getty Pope Francis is to make two shepherd children saints at the Fatima shrine complex in Portugal on Saturday. 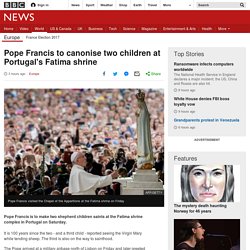 It is 100 years since the two - and a third child - reported seeing the Virgin Mary while tending sheep. News Briefs/Rss. Fatima, Portugal, May 12, 2017 / 05:02 am (CNA/EWTN News).- On “the day the sun danced,” thousands of people bore witness to a miracle that not only proved the validity of the Fatima Marian apparitions, but is also said to have shattered the prevalent belief at the time that God was no longer relevant. 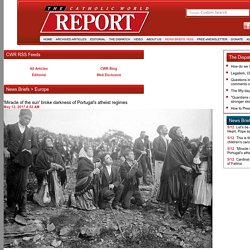 What crowds witnessed the day of the miracle was “the news that God, in the end, contrary to what was said in the philosophy books at that time, was alive and acting in the midst of men,” Dr. Marco Daniel Duarte told CNA in an interview. If one were to open philosophy books during that period, they would likely read something akin to the concept conceived by German philosopher Friedrich Nietzsche, who died in 1900 and boldly made the assertion in his 1882 collection “The Gay Science” that “God is dead.”

Explain why Christians think that pilgrimage is important. The Numinous (Otto) and Mystical Experiences (James)