Lying for God - The Christian Way. ‘There is nothing so easy as by sheer volubility to deceive a common crowd or an uneducated congregation.’ – St. 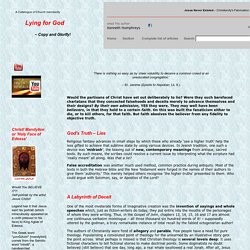 Jerome (Epistle to Nepotian, Lii, 8.) Would the partisans of Christ have set out deliberately to lie? Were they such barefaced charlatans that they concocted falsehoods and deceits merely to advance themselves and their designs? By their own admission, YES they were. They may well have been believers, in that they held to a certain faith. God's Truth – Lies Religious fantasy advances in small steps by which those who already ‘see a higher truth’ help the less gifted to achieve that sublime state by using various devices. False accreditation was another much used method, common practice during antiquity. 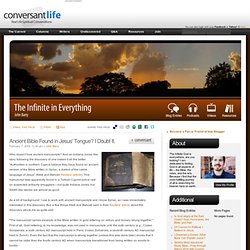 And an Indiana-Jones like story following the discovery of one makes it all the better. "Authorities in northern Cyprus believe they have found an ancient version of the Bible written in Syriac, a dialect of the native language of Jesus" (Ktisti and Bahceli Reuters’ article). This manuscript was apparently found in a Turkish Cypriot police raid on suspected antiquity smugglers—not quite Indiana Jones, but SWAT-like stories are almost as good.

As a bit of background: I use to work with ancient manuscripts and I know Syriac, so I was immediately interested in this discovery. But, a few things Ktisti and Bahceli said in their Reuters’ article about the discovery struck me as quite odd: Ancient Syriac bible found in Cyprus. Exclusive: Early Christian Lead Codices Now Called Fakes. Seventy metal books allegedly discovered in a cave in Jordan have been hailed as the earliest Christian documents. 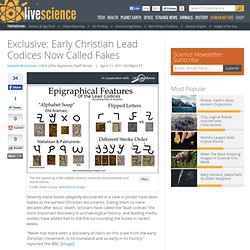 Dating them to mere decades after Jesus' death, scholars have called the "lead codices" the most important discovery in archaeological history, and leading media outlets have added fuel to the fire surrounding the books in recent weeks. "Never has there been a discovery of relics on this scale from the early Christian movement, in its homeland and so early in its history," reported the BBC. [Image] Slowly, though, more and more questions have arisen about the authenticity of the codices, whose credit-card-size pages are cast in lead and bound together by lead rings. Today, an Aramaic translator has completed his analysis of the artifacts, and has found what he says is incontrovertible evidence that they are fakes. Mixed messages. Anti-Muslim Film, Shroud of Turin & Elders of Zion. The trailer for the film "Innocence of Muslims" recently led to riots over its depiction of the prophet Muhammad as a womanizer, child molester and criminal. 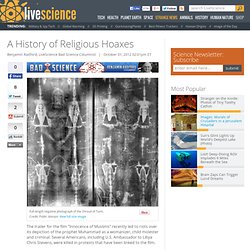 Several Americans, including U.S. Ambassador to Libya Chris Stevens, were killed in protests that have been linked to the film. Despite the outrage it's not clear that the film actually exists; certainly a trailer for it does, but a trailer isn't a film. Investigation into the anti-Muslim "film" is ongoing, but as yet there seems to be no evidence that the film exists other than as a deadly hoax. People create hoaxes for many reasons, but when fraud mixes with religious fervor the results can range from the comical to the deadly.

Jesus Christ the Man: Does the Physical Evidence Hold Up? Jesus Christ may be the most famous man who ever lived. 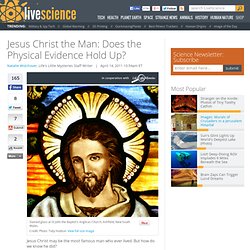 But how do we know he did? Most theological historians, Christian and non-Christian alike, believe that Jesus really did walk the Earth. They draw that conclusion from textual evidence in the Bible, however, rather than from the odd assortment of relics parading as physical evidence in churches all over Europe. That's because, from fragments of text written on bits of parchment to overly abundant chips of wood allegedly salvaged from his crucifix, none of the physical evidence of Jesus' life and death hold up to scientific scrutiny. [Who Was Jesus, the Man?] Holy Hardware. How Harvard scholars may have been duped by a forged ‘Gospel of Jesus’s Wife’ Scientists who examined a controversial papyrus fragment written in Egyptian Coptic in which Jesus speaks of his wife concluded that the papyrus and ink are probably not a modern forgery. 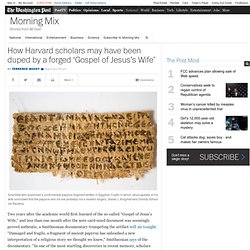 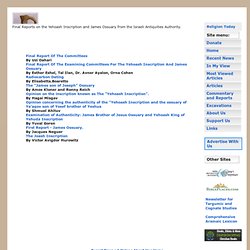 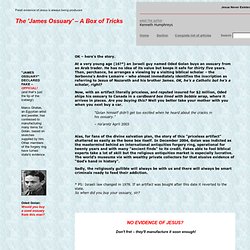 At a very young age (16? *) an Israeli guy named Oded Golan buys an ossuary from an Arab trader. He has no idea of its value but keeps it safe for thirty five years. Then, perchance, he arranges a viewing by a visiting biblical scholar – the Sorbonne's Andre Lemaire – who almost immediately identifies the inscription as referring to Jesus of Nazareth and his brother James. OK, he's a Catholic but he's a scholar, right? Now, with an artifact literally priceless, and reputed insured for $2 million, Oded ships his ossuary to Canada in a cardboard box lined with bubble wrap, where it arrives in pieces.