Grilled Cheesus. "Grilled Cheesus" was watched by 11.20 million US viewers, and was the second most watched scripted show of the week among adults aged 18–49. 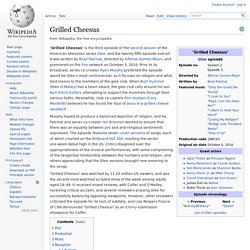 It received mixed reviews, with Colfer and O'Malley receiving critical acclaim, and several reviewers praising Glee for successfully balancing opposing viewpoints. However, other reviewers criticized the episode for its lack of subtlety, and Lisa Respers France of CNN denounced "Grilled Cheesus" as an Emmy-submission showpiece for Colfer. Plot[edit] Glee club co-captain Finn Hudson (Cory Monteith) believes he has found the face of Jesus in a grilled cheese sandwich, he asks for three prayers to be granted: for the school football team to win a game, for his girlfriend Rachel Berry (Lea Michele) to let him touch her breasts, and for him to be reinstated as quarterback.

When his first prayer comes true, he asks the glee club to join him in honoring Jesus through song. Finn's remaining prayers also come true. Production[edit] Mysticism. Numinous. Numinous /ˈnjuːmɨnəs/ is an English adjective, taken from the Latin numen, used by some to describe the power or presence or realisation of a divinity. 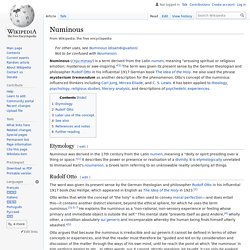 Origins[edit] The word was popularized in the early 20th century by the German theologian Rudolf Otto in his influential book Das Heilige (1917; translated into English as The Idea of the Holy, 1923). According to Otto, the numinous experience has in addition to the tremendum, which is the tendency to invoke fear and trembling, a quality of fascinans, the tendency to attract, fascinate and compel. C.S. Religious experience. A religious experience (sometimes known as a spiritual experience, sacred experience, or mystical experience) is a subjective experience which is interpreted within a religious framework. 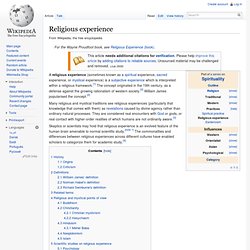 The concept originated in the 19th century, as a defense against the growing rationalism of western society. William James popularised the concept. Many religious and mystical traditions see religious experiences (particularly that knowledge that comes with them) as revelations caused by divine agency rather than ordinary natural processes. They are considered real encounters with God or gods, or real contact with higher-order realities of which humans are not ordinarily aware.[3] Skeptics or scientists may hold that religious experience is an evolved feature of the human brain amenable to normal scientific study. History[edit] Origins[edit] a2-level-level-revision, religious-studies, philosophy-religion, religious-experience, different-forms-religious-experience. Visions A vision experience can happen when a person is awake or in a dream St Teresa of Avila having ‘inner visions’ of Christ i.e. intellectual visions which are seen with the mind as opposed to the eyes. 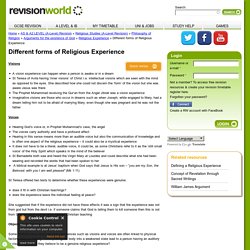 She described how she could not discern the ‘form’ of the vision but she was aware Jesus was there The Prophet Muhammad receiving the Qur’an from the Angel Jibrail was a vision experience Imaginative visions are those who occur in dreams such as when Joseph, while engaged to Mary, had a dream telling him not to be afraid of marrying Mary, even though she was pregnant and he was not the father Voices St Teresa offered two tests to determine whether these experiences were genuine: does it fit in with Christian teachings? She suggested that if the experience did not have these effects it was a sign that the experience was not from god but from the devil i.e. if someone claims that God is telling them to kill someone then this is not from God because murder goes against Christian teaching. Jesus Christ seen in dental x-rays by Arizona woman in pre-Easter surprise. Kym Ackerman saw Jesus in x-ray of left-side molar at dentist in FlagstaffAckerman, 32, pointed the special tooth out to both dentist and hygienistShe plans to frame the x-ray and keep the molar and her mouth cavity-free By Evan Bleier For Dailymail.com Published: 15:41 GMT, 4 April 2015 | Updated: 17:44 GMT, 5 April 2015 An Arizona woman got an early Easter surprise when she saw what she believes to be the image of Jesus Christ in her dental x-rays during a check-up last month. 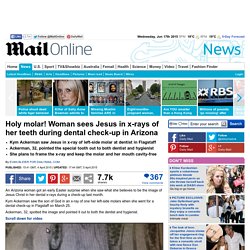 Kym Ackerman saw the son of God in an x-ray of one her left-side molars when she went for a dental check-up in Flagstaff on March 25. Ackerman, 32, spotted the image and pointed it out to both the dentist and hygienist. Scroll down for video. Religious Experience: An introduction. Information: This article gives a brief review of matters related to religious experience, in particular from the Christian theological perspective. 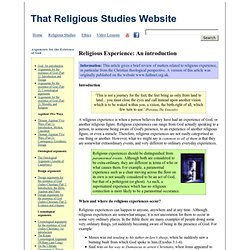 A version of this article was originally published on the website www.faithnet.org.uk. Introduction 'This is not a journey for the feet; the feet bring us only from land to land... you must close the eyes and call instead upon another vision which is to be waked within you, a vision, the birth-right of all, which few turn to use.' (Plotinus, The Enneads) Visions. Avision consists of something seen other than by ordinary sight. 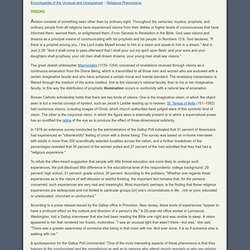 Throughout the centuries, mystics, prophets, and ordinary people from all religions have experienced visions from their deities or higher levels of consciousness that have informed them, warned them, or enlightened them. From Genesis to Revelation in the Bible, God uses visions and dreams as a principal means of communicating with his prophets and his people. In Numbers 12:6, God declares, "If there is a prophet among you, I the Lord make Myself known to him in a vision and speak to him in a dream.

" And in Joel 2:28: "And it shall come to pass afterward that I shall pour out my spirit upon flesh; and your sons and your daughters shall prophesy, your old men shall dream dreams, your young men shall see visions. " Roman Catholic scholarship holds that there are two kinds of visions. As these many polls and surveys demonstrate, visions come to the religious, the non-religious, and the antireligious alike. Science/Nature. Why do people experience religious visions? 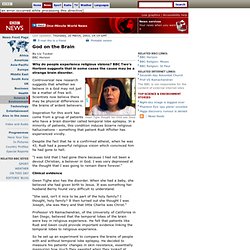 BBC Two's Horizon suggests that in some cases the cause may be a strange brain disorder. Controversial new research suggests that whether we believe in a God may not just be a matter of free will. Scientists now believe there may be physical differences in the brains of ardent believers. Religious%20Experience. Revelation%20through%20Scripture. Religious Experience.