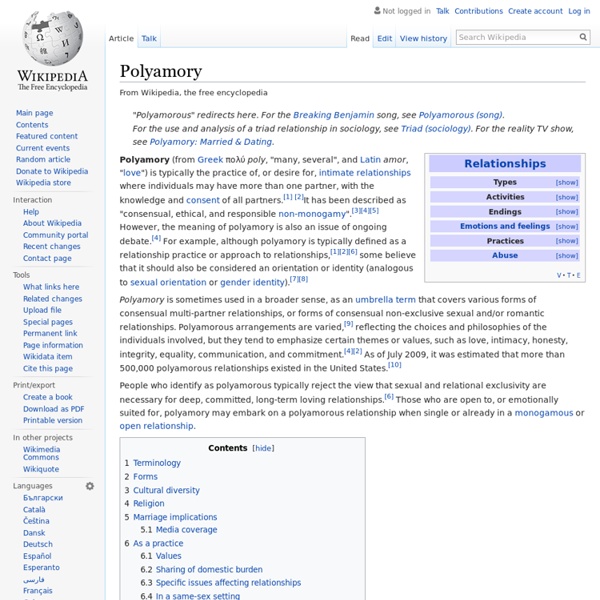 Polyamory (from Greek πολύ poly, "many, several", and Latin amor, "love") is typically the practice of, or desire for, intimate relationships where individuals may have more than one partner, with the knowledge and consent of all partners.[1] [2]It has been described as "consensual, ethical, and responsible non-monogamy".[3][4][5] However, the meaning of polyamory is also an issue of ongoing debate.[4] For example, although polyamory is typically defined as a relationship practice or approach to relationships,[1][2][6] some believe that it should also be considered an orientation or identity (analogous to sexual orientation or gender identity).[7][8] Polyamory is sometimes used in a broader sense, as an umbrella term that covers various forms of consensual multi-partner relationships, or forms of consensual non-exclusive sexual and/or romantic relationships. Terminology[edit] No single definition of "polyamory" has universal acceptance. Forms[edit] Cultural diversity[edit] Religion[edit] Related:  Theme 3: Situation Ethics – a religious approach to ethics

Non-monogamy The Purple Mobius symbol for Polyamory and non-monogamy. Anarchists-A in a heart is a symbol of relationship anarchy. The "love outside the box" symbol for Polyamory and non-monogamy. Non-monogamy is a blanket term which covers several types of interpersonal relationships in which an individual forms multiple and simultaneous sexual or romantic bonds.[1] This can be contrasted with its opposite, monogamy, and yet may arise from the same psychology.[2] The term has been criticized as it may evoke to imply that monogamy is the norm and that any other way of relating is somehow a deviation of that norm. Types of non-monogamy[edit] Many non-monogamous terms are flexible in definition, because they are based on criteria such as 'relationship' or 'love' that are themselves variably defined. Forms of non-monogamy include: See also[edit] References[edit]

Loving More Your #1 Resource for Polyamory TIL when a German hacker stole the source code for Half Life 2, Gabe Newell tricked him in to thinking Valve wanted to hire him as an "in-house security auditor". He was given plane tickets to the USA and was to be arrested on arrival by the FBI : todayil Whistleblower: Catholics must work together to change church's mindset on homosexuality | National Catholic Reporter Jesuit Fr. Klaus Mertes, the German whistleblower who published letters he had received from pupils at a Jesuit school in Berlin who had been abused by teachers for years, has called on all Catholics, "both homosexuals and heterosexuals" to make greater efforts to get the church to change its "deficient" mind-set on homosexuality. "All of us [Catholics] -- homosexuals and heterosexuals -- must join together to get the church to give up its deficient mindset on homosexuality," Mertes said in an interview in the German daily Taz May 25. "The reason why the Catholic church rejects homosexuality above all is because it [the church] combines sex with fertility, which means that the whole issue of sexual morality is connected with fertility." A change of attitude was called for, he underlined. Mertes said that unfortunately, some of the worst homophobes in the church are Catholic priests who are themselves homosexual but deny their own homosexuality.

TIL sprint training for 60 minutes a week burns the same amount of body fat in men as jogging for seven hours a week : todayilearned Polyamorous in Portland: the city making open relationships easy | Life and style When Franklin Veaux was 10 years old, his elementary school English teacher read his class a story about a princess being wooed by two princes. “I thought, princesses live in castles, and castles are big enough for all three of them, so why does she have to choose one?” he said. Throughout his life, Franklin – now 50 and living in Portland, Oregon – has never chosen one. Yet it wasn’t until the 1990s that he found the language to describe his lifestyle. Polyamory is the practice of intimate relationships involving more than two people with the consent of everyone involved. And in Portland – home to swingers’ clubs, the most strip bars per capita, and annual porn festivals – it seems you can’t throw a stone without finding a poly relationship. “Portland is an amazing place if you’re poly, oh my god,” laughed Franklin, who is rarely seen without his bunny ears. Polyamory in the public eye That exposure has only risen recently. Making it work And then there’s the issue of jealousy.

Forget the jog slog and fit in a sprint for maximum weight loss results Pounding the pavement ... Igor Grozdanov, 39, jogging in The Domain during his half hour break from his job in IT in the city. Short sprints can be more effective than hours jogging, according to a study. Photo: Dallas Kilponen SPRINT training for 60 minutes a week burns the same amount of body fat in men as jogging for seven hours a week, Sydney scientists report. More than 40 overweight males participated in a short, high-intensity training regime based on cycle sprints over 12 weeks and measured a significant drop in their abdominal fat and an increase in muscle mass. The lead researcher, Steve Boutcher, said the training program provided the ideal amount of exercise intensity for health benefits, including weight loss, in a short time frame. ''We've been searching for about 10 years for the minimum amount of exercise you can do with the biggest health impact factor,'' Dr Boutcher, an exercise physiologist and associate professor at the University of NSW, said. Advertisement

What does St Paul say about homosexuality? | Busted Halo Was St. Paul homophobic? Some people come to that unfortunate conclusion when reading some of his writings about homosexuality such as Romans 1:24-27; 1Corinthians 6:9-10; and 1Tim 1:10. In particular, it must be noted that, in the Greco-Roman world of which Paul was a part, it was not uncommon for boys or young men to be kept for the purposes of prostitution. When Paul refers to “Sodomites” (1Cor 6:9), he is referring to those adults who used such boys for their own sexual indulgence. Likewise, Paul’s references to these types of acts must be seen within his more general warnings against any kind of sexual promiscuity. Paul’s references to homosexual acts were not particularly controversial to early Christians who knew that the holiness code of Leviticus forbad homosexual acts (Leviticus 20:13).

That Religious Studies Website: Situation Ethics (Part 2): Three Approaches to Decision-Making "At bottom there are only three alternative routes or approaches to follow in making moral decisions: (1) the legalistic; (2) the antinomian… and (3) the situational. All three have played their part in Western morals, legalism being by far the common and most persistent." (Joseph Fletcher) Fletcher begins Situation Ethics with a review of what he believes to be the three main approaches to decision-making. Legalism The key idea in ethical legalism is that one has a set of laws and regulations already worked out. Along with ethical legalism come preset solutions to moral questions. Why Fletcher rejects Legalism Fletcher rejects ethical legalism for two main reasons. Legalism is also ‘cold and abstract’, because it places the Law above the needs of persons. Antinomianism The key idea in antinomianism, is that there are no rules. Fletcher has been wrongly accused of being an Antinomian. Why Fletcher rejects Antinomianism Situationism "Not the “good” or the “right” but the fitting." Review