Pope Francis on Charlie Hebdo Jihad: “One Cannot Make Fun of Faith” Once again, the Pope gives the savagery of jihad slaughter his sanction. 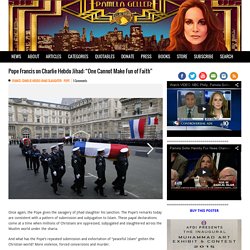 The Pope’s remarks today are consistent with a pattern of submission and subjugation to Islam. These papal declarations come at a time when millions of Christians are oppressed, subjugated and slaughtered across the Muslim world under the sharia. And what has the Pope’s repeated submission and exhortation of “peaceful Islam” gotten the Christian world? More violence, forced conversions and murder.

“Pope Francis Speaks Out on Charlie Hebdo: ‘One Cannot Make Fun of Faith,” Elizabeth Dias, Time Magazine, January 15, 2015 But “To kill in the name of God is an aberration”The Holy Father spoke to journalists in a broad interview on the papal flight to the Philippines about the Charlie Hebdo massacre and the controversy about the magazine’s new cover this week. Patrick Kovarik—AFP/Getty ImagesHe broke it down in everyday terms, something that is coming to be known as classic Francis teaching style.

U.S. “Chose to Stay Silent” on Muslim Persecution of Christians: November 2013. Gatestone Institute The endemic rise of Christian persecution in the Middle East was noted in November when Pope Francis declared “We will not resign ourselves to imagining a Middle East without Christians” and stressed the importance of “the universal right to lead a dignified life and freely practice one’s own faith” after he met with patriarchs from Syria, Iran, and Iraq, all countries where Christian minorities are under attack. 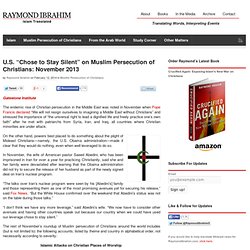 On the other hand, powers best placed to do something about the plight of Mideast Christians—namely, the U.S. Obama administration—made it clear that they would do nothing, even when well leveraged to do so. In November, the wife of American pastor Saeed Abedini, who has been imprisoned in Iran for over a year for practicing Christianity, said she and her family were devastated after learning that the Obama administration did not try to secure the release of her husband as part of the newly signed deal on Iran’s nuclear program. 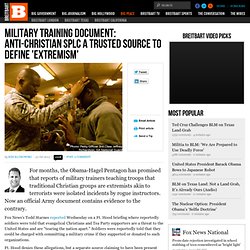 Hood briefing where reportedly soldiers were told that evangelical Christians and Tea Party supporters are a threat to the United States and are “tearing the nation apart.” Soldiers were reportedly told that they could be charged with committing a military crime if they supported or donated to such organizations. Ft. Hood denies these allegations, but a separate source claiming to have been present during the briefing asserts the original account is true. Ironically, in the place where an Islamic radical—Maj. This is just the latest outrage in a long train of disgraces. All this started in April, when Breitbart News broke the story of top Pentagon brass meeting with an anti-Christian activist calling for court-martialing observant Christians who share the gospel of Jesus Christ with others in the military. All along, the nation was told these were a series of isolated incidents, not authorized by military leadership. Christian preacher arrested for saying homosexuality is a sin. 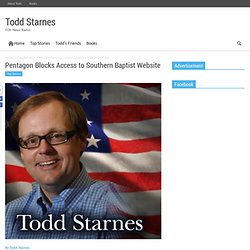 Military has blocked access to the Southern Baptist Convention’s website on an unknown number of military bases because it contains “hostile content” — just weeks after an Army briefing labeled Evangelical Christians and Roman Catholics as examples of religious extremism, Fox News has learned. The Southern Baptist Convention is the nation’s largest Protestant denomination known for its support of the pro-life movement and its strong belief in traditional marriage.

Southern Baptist chaplains reported that SBC.net had been blocked at military installations around the nation. An Air Force officer told Fox News that when he tried to log on to the website he received a message that his Internet usage was being logged and monitored for trying to access a blocked site. RELIGIOUS LIBERTY BEING ERODED. US Army defines Christian ministry as 'domestic hate group' Several dozen U.S. Army active duty and reserve troops were told last week that the American Family Association , a well-respected Christian ministry, should be classified as a domestic hate group because the group advocates for traditional family values.