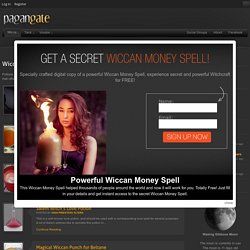 We share a portion of potion recipes that offer protection, health and love. Some of the potions below need to be used in conjunction with spells. Ingredients Keep the silver coin to yourself until a full moon, after which hold the coin on your palm in the moonlight, thinking of the one you love in order... Ginger is an aromatic and warming spice. The purpose of using ginger in this potion is because of its unique strength of drawing sources of money (a quality which is... Aldora Dawn The Kitchen Witch. A word from Aldora…”Holistic Medicine can be dangerous!” 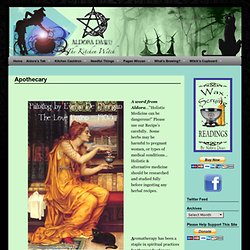 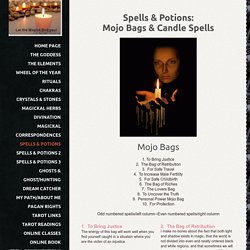 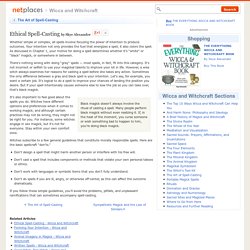 Your intention not only provides the fuel that energizes a spell, it also colors the spell. As discussed in Chapter 1, your motive for doing a spell determines whether it's “white” or “black” magick, or somewhere in between. There's nothing wrong with doing “gray” spells — most spells, in fact, fit into this category. It's not incorrect or selfish to use your magickal talents to improve your lot in life. However, a wise witch always examines her reasons for casting a spell before she takes any action. Black magick doesn't always involve the ritual of casting a spell. It's also important to feel good about the spells you do. Notmykingdom. The Trolliest Critic. The Consulting RPCW. Goodbye, my almost lover. Confessions of an Opinionated Book Geek - Writing Tips #128: How to create Your Own Religion.

A Triad of Religious Pieces. Faith and Foreboding -- Sarah Jane Elliott Giving Depth to Fantasy Religions -- Peggy Kurilla Mother is the Name for God -- Bryn Neuenschwander Faith And Foreboding Or Why does the priesthood have to be evil, anyway? 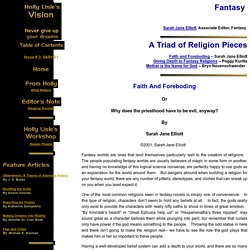 By Sarah Jane Elliott ©2001, Sarah Jane Elliott Fantasy worlds are ones that lend themselves particularly well to the creation of religions. One of the most common religions seen in fantasy novels is simply one of convenience. Having a well-developed belief system can add a depth to your world, and there are so many really interesting religions to choose from that you can borrow parts and make your own. Mind, too, that you don’t go overboard with the clichés. One religious theme that crops up with alarming frequency these days is the evil priesthood. Part of the problem lies in the jaded attitude many people have developed toward organized religion in today’s world. Masterlist: Original Gods and Goddesses. Basic Tips For Writing Orthodox Jews. This article was contributed by Shira M. 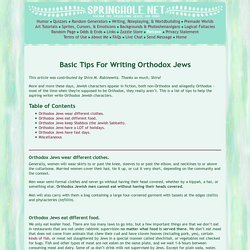 Rabinowitz. Thanks so much, Shira! More and more these days, Jewish characters appear in fiction, both non-Orthodox and allegedly Orthodox - most of the time when they're supposed to be Orthodox, they really aren’t. This is a list of tips to help the aspiring writer write Orthodox Jewish characters. Orthodox Jews wear different clothes. Generally, women will wear skirts to or past the knee, sleeves to or past the elbow, and necklines to or above the collarbone.

Men wear semi-formal clothes and never go without having their head covered, whether by a kippah, a hat, or something else. Men will also carry with them a bag containing a large four-cornered garment with tassels at the edges (tallis) and phylacteries (tefillin). Orthodox Jews eat different food. We only eat kosher food. A few examples of hechsherim (symbols certifying that a food item is kosher) that are generally accepted are the OU, the OK, the StarK, and the ChofK. Rosh HaShana. Holy Site Generator. Worldbuilding - Deity-Development Questions - create better gods and goddesses for richer SF pantheons and religions. How to Write a Christian Novel. So you want to write a Christian novel? 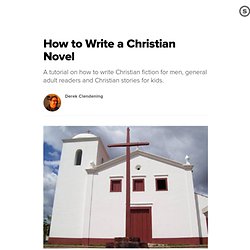 It might be easier than you think. Sometimes the more unassuming themes make Christian fiction what it is. Writing Christian mysteries, Christian science fiction, and Christian historical fiction can be fun and easy. But first, make sure you’ve learned how to properly structure a novel, and then draw up your own plot and structure it accordingly. While doing that, consider some helpful tips. Christian Fiction for Men Christian fiction should entail someone who is on a journey of some sort and they look to God for inspiration. The home for the Christian writer!

Things That Show Up In Christianity-Inspired Fiction That Aren't In The Bible. This article addresses things that appear in fiction based on Biblical concepts (and that includes Dante’s Inferno and Milton’s Paradise Lost), but what aren’t actually in or supported by the Bible. 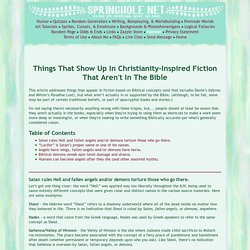 (Although, to be fair, some may be part of certain traditional beliefs, or part of apocryphal books and stories.) I'm not saying there's necessarily anything wrong with these tropes, but... people should at least be aware that they aren't actually in the books, especially when they're trying to using them as shortcuts to make a work seem more deep or meaningful, or when they're looking to write something Biblically accurate per what's generally considered canon. Satan rules Hell and fallen angels and/or demons torture those who go there. Let’s get one thing clear: the word “Hell” was applied way too liberally throughout the KJV, being used to name entirely different concepts that were given clear and distinct names in the various source materials.