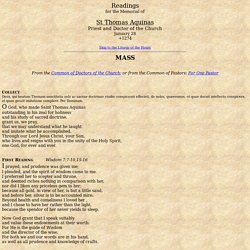 Per Dominum. O God, who made Saint Thomas Aquinas outstanding in his zeal for holiness and his study of sacred doctrine, grant us, we pray, that we may understand what he taught and imitate what he accomplished. Through our Lord Jesus Christ, your Son, who lives and reigns with you in the unity of the Holy Spirit, one God, for ever and ever. FIRST READING Wisdom 7:7-10,15-16 I prayed, and prudence was given me; I pleaded, and the spirit of wisdom came to me. I preferred her to scepter and throne, and deemed riches nothing in comparison with her, nor did I liken any priceless gem to her; because all gold, in view of her, is but a little sand, and before her, silver is to be accounted mire.

Theme 1: Deductive Arguments. Theme 2: Challenges to religious belief - the problem of evil an. Theme 3: Religious Experience. Philosophy and Ethics. The Difference Between Inductive and Deductive Reasoning. Peter Hitchens. Introduction to the Philosophy of Religion. That Religious Studies Website. Philosophy. Upload Support us on Patreon! 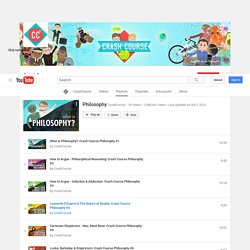 CrashCourse Loading... Working... ► Play all Philosophy. PHILOSOPHY. It's reasonable to admit the true limits of reason - BC Catholic. Imagine a drunk looking beneath a streetlamp for his keys. 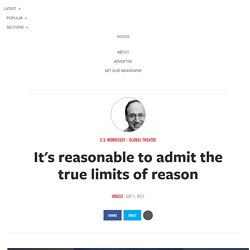 No matter how hard he looks for them there, under the light, they cannot be found. A passerby suggests he look somewhere else. Maybe they are somewhere other than inside that small patch of light. The response from the drunk is indignant. No, of course not! This is a parable about science. “The arguments for the existence of God do nothing to support the God people actually worship” Critically evaluate this statement. [40] 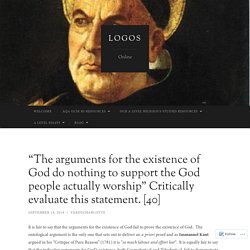 The ontological argument is the only one that sets out to deliver an a priori proof and as Immanuel Kant argued in his “Critique of Pure Reason” (1781) it is “so much labour and effort lost“. Thomas Aquinas, part 1: rediscovering a father of modernity. University of Naples, 6 December 1273. 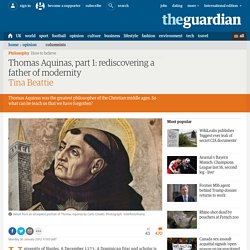 A Dominican friar and scholar is working on the final section of his life's culminating work. He is about 48 years old, and has written many biblical and philosophical commentaries and theological treatises. He goes to celebrate mass, and there he experiences a crisis – a mystical experience, or possibly a stroke. "All I have written seems as straw compared to what I have experienced," he says, and he abandons his masterpiece unfinished. A few months later, he falls ill on a journey to a church council in Lyons, and he dies at the monastery at Fossanova on 7 March 1274.

The 13th century was a turbulent era of crusades, religious conflicts and power struggles. Learning had shifted from monasteries and cathedral schools into the newly established universities. Unlike his warring brothers, Aquinas was happier reflecting upon life than immersing himself within it. The 7 Most Intriguing Philosophical Arguments for the Existence of God. Arguments for the Existence of God. General Information Proofs FOR the Existence of God While theology may take God's existence as absolutely necessary on the basis of authority, faith, or revelation, many philosophers-and some theologians-have thought it possible to demonstrate by reason that there must be a God. 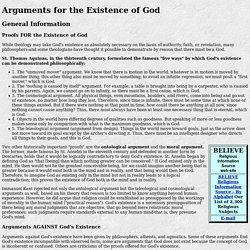 St. Thomas Aquinas, in the thirteenth century, formulated the famous "five ways" by which God's existence can be demonstrated philosophically: 1. Immanuel Kant rejected not only the ontological argument but the teleological and cosmological arguments as well, based on his theory that reason is too limited to know anything beyond human experience. Arguments AGAINST God's Existence. The best books on the Existence of God. In your book The Last Superstition, you have been a very vocal critic of the ‘New Atheism’ movement. 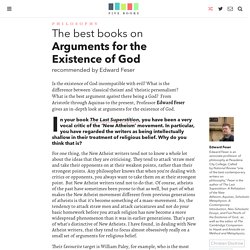 In particular, you have regarded the writers as being intellectually shallow in their treatment of religious belief. Why do you think that is? For one thing, the New Atheist writers tend not to know a whole lot about the ideas that they are criticising. They tend to attack ‘straw men’ and take their opponents on at their weakest points, rather than their strongest points. Any philosopher knows that when you’re dealing with critics or opponents, you always want to take them on at their strongest point. BBC Radio 4 - Book of the Week, On Truth, Kathryn Murphy. 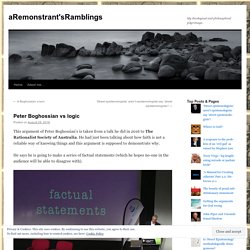 He had just been talking about how faith is not a reliable way of knowing things and this argument is supposed to demonstrate why. He says he is going to make a series of factual statements (which he hopes no-one in the audience will be able to disagree with). “There are different faith traditions.” Boghossian shows the audience the symbols of the six big religions. 2. 3. His primary example to substantiate 3 is that Islam claims Muhammed is the final prophet and Mormonism says Joseph Smith was a prophet (and it’s uncontroversial that he lived long after Muhammed. 02 Introduction to the Philosophy of Religion Workbook. 02 Philosophy of Religion Intro.