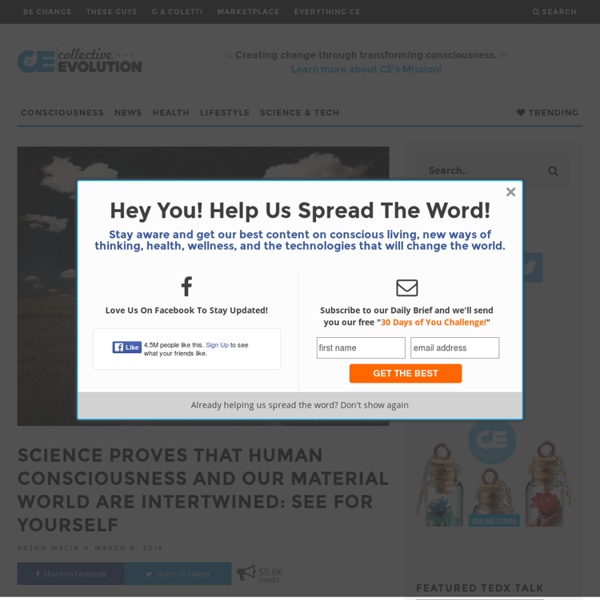 Nikola Tesla said it best, “the day science begins to study non-physical phenomena, it will make more progress in one decade than in all the previous centuries of its existence. To understand the true nature of the universe, one must think it terms of energy, frequency and vibration.” Swami Vivekananda influenced Tesla’s work, an Indian Hindu monk and chief disciple of the 19th century saint Ramakrishna. Tesla was also influenced by other Vedic philosophies. Science works best when in harmony with nature. If we put these two together, we can discover great technologies that can only come about when the consciousness of the planet is ready to embrace them, like free energy. Intention of This Article. I want to make it clear that my intention of presenting this information is to demonstrate that thoughts, intentions, prayer and other units of consciousness can directly influence our physical material world. The Science 1. 2. 3. 4. You can read more about remote viewing here. 5. 6. 7. 8. (0)

Creationism is dangerous: HBO documentary Questioning Darwin shows how fundamentalism imprisons the mind. Courtesy of HBO Intellectual freedom is one of humanity’s greatest gifts—and biggest burdens. Our ability to ask questions, to test ideas, to doubt is what separates us from our fellow animals. But doubt can be as terrifying as it is liberating. And it’s the terror of doubt that fosters the toxic, life-negating cult of creationism. Mark Joseph Stern is a writer for Slate.

Radical Behaviourism and Society Here is yet another entry for the Rational Skepticism Science Writing Contest. Please give it a read and, if you like it, vote for it! Also, I may have failed to mention, the general topic the essays must address is “What area of scientific research do you think will prove to be the most important by the end of this century, and why?” The Narcissism of ADD & ADHD – ADD, ADHD & Executive Functioning Coach Image courtesy of imagerymajestic/ FreeDigitalPhotos.net Individuals with ADD and ADHD have a strong tendency towards narcissism. I speak from personal and professional experience. We have a tendency of looking at the world through our eyes and failing to see it from other people’s point of view.

The Art of Prayer – 7 Keys to Intentional Manifesting – Global Illumination Council Jon Rasmussen, Contributor Do you know how to pray? There is more to it than just asking God for something that you want. Can We Reprogram Our DNA and Heal Ourselves With Frequency, Vibration & Energy? As though to confirm the hunch many of us had that our ‘junk’ DNA was anything but disposable, researchers from the Gene and Stem Cell Therapy Program at Sydney’s Centenary Institute have proven that 97 percent of human DNA programs or encodes proteins in our bodies. One of the researchers involved in this study said, “this discovery, involving what was previously referred to as “junk,” opens up a new level of gene expression control . . .” This also means there are multiple modalities that mainstream science has yet to give a nod to, which just might re-train or reprogram our DNA — even cells which have become cancerous or are mutilated by the onslaught of toxins in our environment and negative emotional baggage which has been proven to have an undesirable impact on health. Many people have compared human DNA to the Internet. Chaos Theory and DNA The DNA Spectrum: Making Music with Biology

Peyotism and Native American Spirituality Earlier we had spoken how marijuana has been used in India and is still used across the country during festivals like Holi in the form of bhang. The Rig-Veda is the chief of the four vedas of ancient India, that consists of hymns and prayers sung well before 800 BC to worship Gods – it speaks of Soma, a potent drink produced from an unidentified plant. It was drunk only at sacrifices, and caused the most invigorating effects. Today we shall take a look across the world at Native American spirituality revolving around the use of entheogens, the current use of Peyote and the chemical Mescaline that is derived from it and widely used as a recreational drug. The exact date as to when man started using Peyote is not known, but at an archaeological excavation in Texas, a radiocarbon analysis showed that the specimens of Peyote found there were dated between 3780 and 3660 BC. Lets take a look at a Peyote ritual –

Umberto Eco’s Antilibrary: Why Unread Books Are More Valuable to Our Lives than Read Ones by Maria Popova How to become an “antischolar” in a culture that treats knowledge as “an ornament that allows us to rise in the pecking order.” “It is our knowledge — the things we are sure of — that makes the world go wrong and keeps us from seeing and learning,” Lincoln Steffens wrote in his beautiful 1925 essay. Piercingly true as this may be, we’ve known at least since Plato’s famous Allegory of the Cave that “most people are not just comfortable in their ignorance, but hostile to anyone who points it out.”. Although science is driven by “thoroughly conscious ignorance” and the spiritual path paved with admonitions against the illusion of thorough understanding, we cling to our knowledge — our incomplete, imperfect, infinitesimal-in-absolute-terms knowledge — like we cling to life itself. And yet the contour of what we know is a mere silhouette cast by the infinite light of the unknown against the screen of the knowable.

Narcissistic Personality Disorder (NPD) Narcissistic Personality Disorder (NPD) Introduction Narcissistic Personality Disorder is a serious condition which affects an estimated 1% of the population. The Body in Coaching - Embodied approaches, tools and tips Your body is the ground metaphor of your life, the expression of your existence. It is your Bible, your encyclopaedia, your life story.” – Gabrielle Roth Why the body is important for coaches The body is an integral part of what it means to be human, so needs to be an aspect of effective coaching. Coaching as a discipline came from the body athletic – the standard Western view of the body as a machine that carries the head around – so physicality was quickly ignored by most early coaching schools which focused on language and thinking. As coaching has matured some schools have reintegrated the body to some extent and there are several embodied specialists such as Strozzi Institute, Leadership Embodiment and my own Embodied Facilitator Course.