Howard Stern Vs. Pat Robertson Pt. 1. Howard Stern Incinerates Kirk Cameron. Catholic Church: Religious Freedom Trumps Civil Rights. In an exclusive interview, one of the top pro-Kiev militia commanders talks about the cowardice of some of Ukraine’s regular army officers and his need for U.S. weapons. 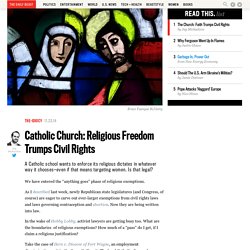 DNIPROPETROVSK, Ukraine—When skirmishes began in this corner of eastern Ukraine earlier this year, Yuriy Bereza decided to use “direct action” (read fists and clubs), threats, and incentives to ensure this fourth largest city—and a mainly Russian-speaking one—didn’t slide into rebel hands as Donetsk and Luhansk had done. Bereza, a veteran of the Orange Revolution of mass protests against Russian-backed governments, joined forces with a group of local businessmen, including billionaire oligarch Igor Kolomoisky, to make sure this city stayed on the Ukrainian side of the political divide.

The strategy seems to have worked. Bereza took the same message to U.S. lawmakers in closed-door meetings on Capitol Hill, telling them they need to do more for Ukraine. Ukraine’s militiamen ask “What ceasefire?” ​Doctor Acquitted in Egypt's Very First Female Genital Mutilation Trial. 5 Myths You Probably Believe About Major Religions. As a comedy website, we tend to stay away from too much talk about religion. 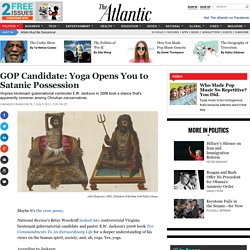 Jackson in 2008 took a stance that's apparently common among Christian conservatives. Maybe it's the crow poses. National Review's Betsy Woodruff looked into controversial Virginia lieutenant gubernatorial candidate and pastor E.W. Jackson's 2008 book Ten Commandments To An Extraordinary Life for a deeper understanding of his views on the human spirit, society, and, uh, yoga. Yes, yoga. According to Jackson: When one hears the word meditation, it conjures an image of Maharishi Yoga talking about finding a mantra and striving for nirvana. . . . Yoga has become so normalized in American life that this seems an extreme position (no pun intended). Starbucks says it’s sorry a barista put a Satanic symbol in teacher’s coffee. The devil is supposed to be in the details. 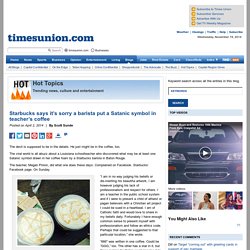 He just might be in the coffee, too. The viral world is all abuzz about a Louisiana schoolteacher who discovered what may be at least one Satanic symbol drawn in her coffee foam by a Starbucks barista in Baton Rouge. The teacher, Megan Pinion, did what one does these days: Complained on Facebook. Starbucks’ Facebook page. On Sunday. Kirk Cameron Says Pagans Stole Christmas From Christians. Kirk Cameron wants people to know that many have Christmas all wrong. 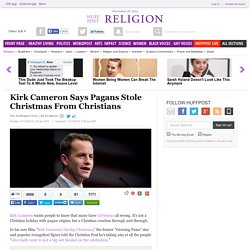 It's not a Christian holiday with pagan origins, but a Christian creation through and through. In his new film, "Kirk Cameron's Saving Christmas," the former "Growing Pains" star and popular evangelical figure told the Christian Post he's taking aim at all the people "who really want to put a big wet blanket on the celebration. " When Celebrity Christianity Backfires  Let's be real, you guys. 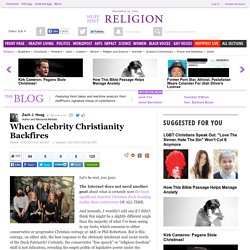 The Internet does not need another post about what is certainly now the most significant bearded Christian duck-hunting reality show controversy OF ALL TIME. And honestly, I wouldn't add one if I didn't think this might be a slightly different angle than the majority of what I've been seeing in my feeds, which amounts to either conservative or progressive Christian outrage at A&E or Phil Robertson. But is this outrage, on either side, the best response to the obviously intolerant and racist words of the Duck Patriarch? Certainly, the conservative "free speech" or "religious freedom" stuff is just ridiculous, revealing the empty politic of legislative power under the surface of modern evangelicalism yet again.

But the progressive Christian attempt to counter the conservative perspective, while needed, may also be missing the root issue involved. Toni Braxton claims her son’s autism was God’s punishment for abortion, may be due to vaccinations. Bill Maher Discussion about Jesus Camp. Have You Accepted Jesus Yet? Dumb Shit the Bible Says. Theists Gone Wild - FreeThoughtPedia. Hurricane Sandy — The Wrath Of God? As we near the end of one of the most glorious outbursts of insanity in human history, aka. the 2012 election, a giant "superstorm" called Sandy is threatening to wipe out ... 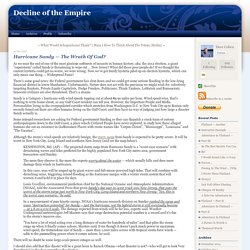 New Jersey? What did those poor people do? If we thought the current hysteria could get no worse, we were wrong. Now we've got Sandy hysteria piled up on election hysteria, which can only mean one thing — Widespread Panic! There's some good news: the Federal government has shut down and we could get some serious flooding in the low-lying financial district in lower Manhattan. Sandy is a Category 1 hurricane with wind speeds topping out at about 85 90 miles per hour. Although the storm's wind speeds are relatively benign, the storm surge from Sandy is expected to be pretty severe. KENSINGTON, Md. There will no doubt be some large-scale power outages as well.

Christian Ministries responded to President Barack Obama's State of the Union address with a speech of his own, which he called "God's State of the Union," reports Raw Story. ‘Full House’ Actress Reveals How Her Christian Faith Has Impacted ‘Dancing With the Stars’ Experience. Actress Candace Cameron Bure says she has experienced both praise and criticism for openly sharing her Christian views on “Dancing With the Stars,” a live TV competition in which she’s been jumping, jiving and facing off against fellow entertainers each week on the dance floor. 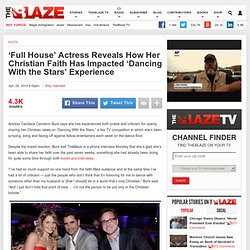 Despite the mixed reaction, Bure told TheBlaze in a phone interview Monday that she’s glad she’s been able to share her faith over the past seven weeks, something she had already been doing for quite some time through both books and interviews. Meet The Former Call Girl Saving Hookers For Jesus. Police hunted down the prostitute accused of watching a Google exec overdose—and found a trail of dead and damaged men in her past. 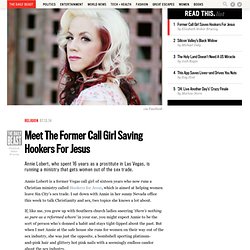 The detectives from the Santa Cruz police department could see an unmistakable injection mark in the arm of the deceased Google executive. But the detectives could see no drugs and no syringe on the yacht where 51-year-old Forrest Timothy Hayes had been found dead from a heroin overdose. What the detectives did see was a pair of wine glasses on a table. They also noted that somebody appeared to have straightened up the cabin. “There was another person in the room, obviously,” Deputy Chief Steve Clark of the Santa Cruz Police later said. Photo by boxedmilk. Photo by fuckyouandurhomeboy. Photo by pazdean. Photo by wheres_that_god_guy_at. Photo by willoou77.