All vertebrates, including humans, can inherit albinism if both parents carry the gene for it. ALBINO ANIMALS lack any pigment in their skin, fur, scales, or feathers -- even in their eyes. Animals that are only partially albino are leucistic.

Wild albino and leucistic animals rarely make it to adulthood as they cannot conceal themselves from their prey or their predators. Leucistic King Penguin. 'Tira' the pseudo-melanistic zebra foal. Psuedo-melanistic pattern observed in zebra foal 'Tira' Rare albino wallabies thriving on Tasmania's Bruny Island. Rare albino wallabies are thriving on Bruny Island, south of HobartExperts say this is due to a lack of predators on the Tasmanian island They are sun sensitive, prone to cancer and often have eye problemsBut their population has increased to around 200 on the small island By Jenny Awford For Daily Mail Australia Published: 15:01 GMT, 24 March 2016 | Updated: 15:06 GMT, 24 March 2016 Rare albino wallabies are thriving on a small Tasmanian island due to a lack of predators and because locals think they are 'cute', experts have revealed. 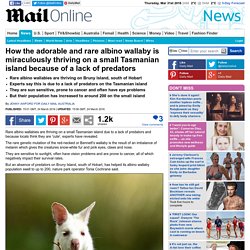 The rare genetic mutation of the red-necked or Bennett's wallaby is the result of an imbalance of melanin which gives the creatures snow-white fur and pink eyes, claws and nose. They are sensitive to sunlight, often have vision problems and are prone to cancer, all of which negatively impact their survival rates. Albino Humpback Whale. Albinoid Peacocks. Photo by Yvonne Ayoub Within the plumage of a peacock lies a complex architecture that's continuously changing color. 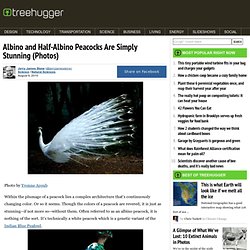 Or so it seems. Though the colors of a peacock are revered, it is just as stunning--if not more so--without them. Often referred to as an albino peacock, it is nothing of the sort. It's technically a white peacock which is a genetic variant of the Indian Blue Peafowl. Photo by nikki.loraine (view larger photo) The colors in the feathers of a bird are determined two factors: pigment and structure. Photo by *amy&kimball; Pigment colorization in birds comes from three different groups: melanins, carotenoids, and porphyrines. But feather structure is as important to color as pigment. Like this article? Photo by Timothy Riley (view larger photo) Rare pink leucistic hippo. A rare pink hippo has been snapped in Kenya, marking the first time such a creature has been spotted in the African country. 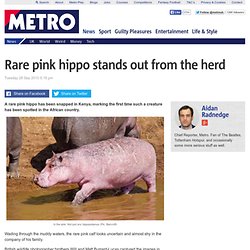 Wading through the muddy waters, the rare pink calf looks uncertain and almost shy in the company of his family. British wildlife photographer brothers Will and Matt Burrard-Lucas captured the images in Kenya’s Masai Mara, Kenya last week. ‘It was a young one as it is much smaller than the other hippos and always stayed close to its mother,’ said Will, 26.

‘It was nice to see the other hippos treated it no differently to any other. It was also very shy and after spotting us it hid behind its mother before disappearing into the water.’ Pink hippos are leucistic, where the pigmentation cells fail to develop properly. ‘Usually leucistic and albino animals do not survive in the wild as they are very visible to predators and they get serious sunburn,’ said Will, from London. Leucistic Peacock. Leucistic Great White Shark Washes Up In Australia. If this animal was a Pokémon card, it would be a shiny one. 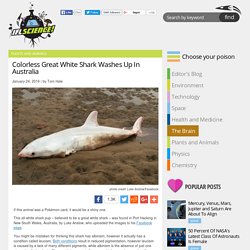 This all-white shark pup – believed to be a great white shark – was found in Port Hacking in New South Wales, Australia, by Luke Anslow, who uploaded the images to his Facebook page. You might be mistaken for thinking this shark has albinism, however it actually has a condition called leucism. Both conditions result in reduced pigmentation, however leucism is caused by a lack of many different pigments, while albinism is the absence of just one pigment called melanin. The usual give away is the eyes, which are red or purple with albinism but retain their more conventional color with leucism. Local fishery departments will investigate how this pale rarity died, as the shark reportedly had no clear signs of injury or cause of death. Due to its deceptively small size and lack of pigment, classification of the shark’s species is tricky – with guesses ranging from a mako shark to a porbeagle shark.