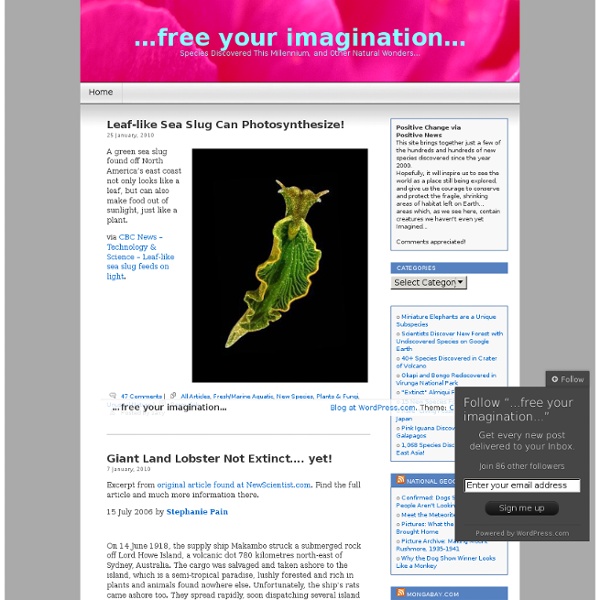 Excerpt from original article found at NewScientist.com. Find the full article and much more information there. 15 July 2006 by Stephanie Pain On 14 June 1918, the supply ship Makambo struck a submerged rock off Lord Howe Island, a volcanic dot 780 kilometres north-east of Sydney, Australia. The cargo was salvaged and taken ashore to the island, which is a semi-tropical paradise, lushly forested and rich in plants and animals found nowhere else. Unfortunately, the ship’s rats came ashore too.

Most Extreme Landscapes on Earth Our globe is home to some truly breathtaking and extraordinary sights. Be it strangely-shaped rock formations, alien-looking sulfur springs or unique chocolate hills, the world is full of such beautiful phenomena that no words can describe it. Pictures may help... Sharply eroded buttes, pinnacles, and spires are the main features of Badlands National Park, South Dakota, USA. Molecular secrets of the "iron-plated snail" February 03, 2010 Molecular secrets of the “iron-plated snail” Life isn’t easy for the “scaly-foot gastropod”. This humble snail lives in hydrothermal vent fields two miles deep in the Indian ocean, and is surrounded by vicious predators. For example, there’s the “cone snail”, which stabs at its victims with a harpoon-style tooth as a precursor to injecting them with paralyzing venom. Then there’s the Brachyuran crab, which has been known to squeeze its prey for three days in an attempt to kill it.

Innovative, Reusable "Replenish" Spray Bottle Could Disrupt Home Cleaning Market - Environment We love to tout sustainability in the consumer sector, but of the 60 billion pounds of plastic discarded annually, only 7 percent is recycled—meaning that billions of pounds end up in landfills. That said, recycling shouldn't be our only objective; the other Rs (reduce and reuse) should be our primary targets. That's where Replenish comes in. My pride and joy: Young lion wakes his sleeping father with a gentle growl By Daily Mail Reporter Updated: 22:46 GMT, 29 January 2010 Nestled under the magnificent mane of his father, the little lion cub gives a growl so gentle it would fail to startle a passing gazelle. But when he grows up he'll be able to roar just like daddy.

Most Popular Artists The most popular artist searches last month: a not-to-be-taken-too-seriously measurement of which famous artists have the greatest "mindshare" in our collective culture. Moving up: Edgar Degas (#22 to #12), Titian (#28 to #18), and realist painter Janet Fish (appearing for the first time on the list at #29). Moving down: Joan Miro (#13 to #19), Wassily Kandinsky (#11 to #24) and Paul Gauguin (#21 down to #32). How we measure popularity: In order to eliminate any kind of selection bias due to search engine ranking, external links, etc., we only count internal links from our own search box and our artist listings.

Incredible Wildlife Photography Wildlife — By Stephanie on January 11, 2010 at 10:58 am Canada goose protects her young Ever have one of those moments when you think to yourself, “Boy, I wish I had my camera?!” 10 Amazing Tricks to Play with your Brain / Mind Mind is the aspect of intellect and consciousness experienced as combinations of thought, perception, memory, emotion, will and imagination, including all unconscious cognitive processes. Mind manifests itself subjectively as a stream of consciousness. Neuroanatomists usually consider the brain to be the pivotal unit of what we refer to as mind. The Human Brain tricks us whenever it can.

Continuous Pencil by U Jung Heo, Young Gag Han & Sa Yoeng Kim Never Ending Pencil To cut a long story short, what we have here is a simple writing tool called the Continuous Pencil, which can be used till the very end. We usually end up discarding pencil stubs…I know my children waste too many saying that short pencils are uncomfortable to hold. So basically you keep increasing the length of your stubs with a handy interim-headless-long stick that fits snugly into its rear. Quite simple and straight, but is it a refinement of the 1 + 1 Pencil?

Pictured: Three cheetahs spare tiny antelope's life... and play with him instead By Daily Mail Reporter Updated: 19:36 GMT, 5 February 2010 Hello little antelope, would you like to play with us? Coming from three deadly cheetahs, it's the kind of invitation that's best refused - but amazingly, this impala escaped unscathed from its encounter. Luckily for the youngster, it seems these three male cheetahs simply weren't hungry. No claws for alarm: Astonishingly, these cheetahs, whose instinct is to hunt for food, decide to play with this baby impala

Bananas and Monkeys Original source unknown. (But the story appears to have some basis in fact.) Start with a cage containing five monkeys. Inside the cage, hang a banana on a string and place a set of stairs under it. Before long, a monkey will go to the stairs and start to climb towards the banana. As soon as he touches the stairs, spray all of the other monkeys with cold water. 10 Most Famous Trees in the World Famous trees come and go. L’Arbre du Ténéré was once considered the most isolated tree on Earth, a landmark on caravan routes in the Sahara, until it was knocked down by a drunk Libyan truck driver in 1973. This year in August, the famous Anne Frank tree in Amsterdam was blown down by high winds during a storm. Luckily, there are still many special trees out there. An overview of the most famous trees in the world.