DNA Interactive: Discovering the DNA Structure and beyond 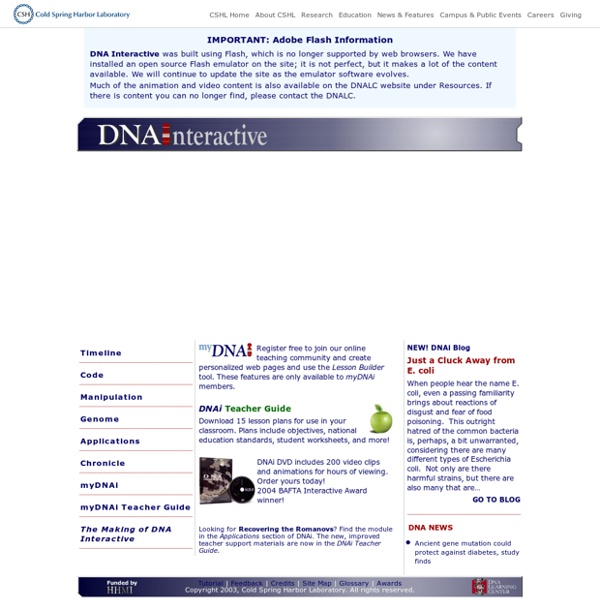 Electromagnetic Spectrum: Radio Waves Global rating average: 0.0 out of 50.00.00.00.00.0 These sites explain how radio waves are a part of the electromagnetic spectrum. Includes information about AM and FM frequencies and how to measure waves. Also includes a biography on Marconi, inventor of the radio.

Sleep: Genes Cause People to React Differently to Lack of Sleep, Says Study <br/><a href=" US News</a> | <a href=" Business News</a> Copy No matter how little they sleep, some people can keep a skip in their step while others will yawn and struggle through the day. A new study from the University of Pennsylvania School of Medicine found that the reason could be in our genes. Researchers found that healthy people with one particular genetic variant were generally sleepier than those without the gene. About 25 percent of the general public has the genetic variant, called DQB1 *0602, but only a small percentage of them actually suffer from sleep problems. Territory Wildlife Park - home > Territory Wildlife Park Dingo Pastel Painting by AiP Artist Janelle Fisher 2011 Territory Wildlife Park is inviting artists and groups of artists to apply for the 2014 Artists-in-the-Park Program. Applications close on Friday 28th February 2014. For more information and to download and application form visit the Artist in the Park webpage

Cracking the Code of Life Cracking the Code of Life PBS Airdate: April 17, 2001 ROBERT KRULWICH: When I look at this—and these are the three billion chemical letters, instructions for a human being—my eyes glaze over. But when scientist Eric Lander looks at this he sees stories. ERIC LANDER (Whitehead Institute/MIT): The genome is a storybook that's been edited for a couple billion years. Structure of a Muscle Cell (Muscle Fibre) This page follows on from the more general page about the structure of muscle. Skeletal muscles consist of 100,000s of muscle cells (also known as 'muscle fibers') that perform the functions of the specific muscle of which they are a part. The diagram above shows some detail of the structure of a muscle cell. It illustrates the distinctive structure of muscle cells, including striated myofibrils (components of muscle cells only).

Electricity: Circuits, Conductors, and Batteries Global rating average: 0.0 out of 50.00.00.00.00.0 These sites have lots of illustrations and animations that demonstrate how electricity, circuits, and batteries work. Learn the difference between conductors and insulators and the difference between series circuits and parallel circuits. Includes a lesson plan, suggested activities, hands-on experiments, and online games and quizzes. There are links to eThemes resources on electrical safety, current and static electricity. Grades 23andMe presents top 10 most interesting genetic findings of 2010 Public release date: 12-Jan-2011 [ Print | E-mail Share ] [ Close Window ] Contact: Jane E. Alice Springs Desert Park - Central Australia - Gateway to the West MacDonnell National Park Home > Alice Springs Desert Park "People wonder what it is that is so special here and it is because everything comes here. We connect to it, we're a part of it.

Emotion reversed in left-handers brains The way we use our hands may determine how emotions are organized in our brains, according to a recent study published in PLoS ONE by psychologists Geoffrey Brookshire and Daniel Casasanto of The New School for Social Research in New York. Motivation, the drive to approach or withdraw from physical and social stimuli, is a basic building block of human emotion. For decades, scientists have believed that approach motivation is computed mainly in the left hemisphere of the brain, and withdraw motivation in the right hemisphere. Brookshire and Casasanto's study challenges this idea, showing that a well-established pattern of brain activity, found across dozens of studies in right-handers, completely reverses in left-handers. The study used electroencepahlography (EEG) to compare activity in participants' right and left hemispheres during rest. A New Link Between Motor Action and Emotion

Human Body: Explore the Human Anatomy in 3D Different organs can work together to perform a common function, like how the parts of your digestive system break down food. We refer to an integrated unit as an organ system. Groups of organ systems work together to make complete, functional organisms, like us! Strange Matter: Stuff for Teachers Download a Teacher's Guide Our teacher's guide is focused for grades 5 to 8. It includes background on the exhibition, pre- and post-visit hands-on activities using inexpensive, easy-to-find materials, teaching strategies, a glossary, resource lists and more. Download the Guide Epigenetics Epigenetics PBS air date: July 24, 2007 CHEERFUL NEIL DEGRASSE TYSON: Did you ever notice that if you get to know two identical twins, they might look alike, but they're always subtly different? CANTANKEROUS NEIL DEGRASSE TYSON: Yep, whatever. CHEERFUL NEIL DEGRASSE TYSON: As they get older, those differences can get more pronounced. Two people start out the same but their appearance and their health can diverge.