Robert Grosseteste’s integralism – Semiduplex. Over the past few years, there have been numerous attempts to mark out a course for postliberal political thought by looking to preliberal regimes. 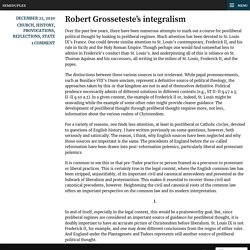 Much attention has been devoted to St. Louis IX’s France. One could devote similar attention to St. Louis’s contemporary, Frederick II, and his rule in Sicily and the Holy Roman Empire. Though perhaps one would find somewhat less to admire in Frederick’s conduct than St. The distinctions between these various sources is not irrelevant. For a variety of reasons, one finds less attention, at least in postliberal or Catholic circles, devoted to questions of English history.

It is common to see this or that pre-Tudor practice or person framed as a precursor to protestant or liberal practices. The Gnostic heresy’s political successors. 90 - Leo XIII on the State's Duties Toward the Church - Thomas Pink. Live a Little. FAMULI VESTRÆ PIETATIS – The Josias. By Pope St. 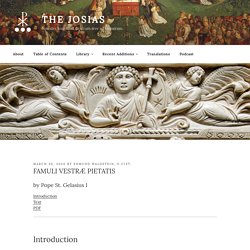 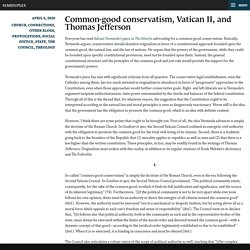 Basically, Vermeule argues, conservatives should abandon originalism in favor of a constitutional approach founded upon the common good, the natural law, and the law of nations. He argues that the powers of the government, while they could be founded upon specific constitutional provisions, need not be founded upon them. Instead, the general constitutional structure and the principles of the common good and just rule would provide the support for the government’s powers. Vermeule’s piece has met with significant criticism from all quarters. The conservative legal establishment, even the Catholics among them, has too much invested in originalism to abandon it in favor of “progressive” approaches to the Constitution, even when those approaches would further conservative goals.

However, I think there are some points that ought to be brought out. A Catholic Debate over Liberalism. Last May, First Things published an article by Sohrab Ahmari, an Iranian-born editor at the New York Post and recent Catholic convert, titled “Against David French-ism.” 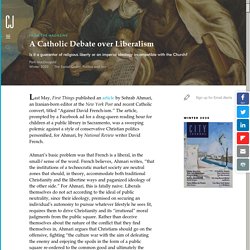 The article, prompted by a Facebook ad for a drag-queen reading hour for children at a public library in Sacramento, was a sweeping polemic against a style of conservative Christian politics personified, for Ahmari, by National Review writer David French. Ahmari’s basic problem was that French is a liberal, in the small-l sense of the word. French believes, Ahmari writes, “that the institutions of a technocratic market society are neutral zones that should, in theory, accommodate both traditional Christianity and the libertine ways and paganized ideology of the other side.” For Ahmari, this is fatally naive. Thomism and Political Liberalism, Part 1 – Catholic World Report.

The Catholic debate about the value of political and economic liberalism ebbs and flows. 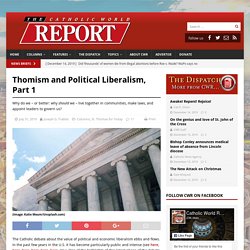 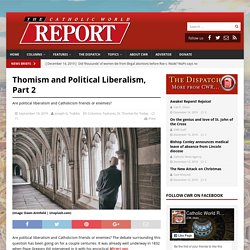 The debate surrounding this question has been going on for a couple centuries. It was already well underway in 1832 when Pope Gregory XVI intervened in it with his encyclical Mirari vos. In the U.S. in the past few years this debate has become rather public and intense. As a contribution to the current American debate, I am writing a three-part series on Thomism and political liberalism.

Thomism and Political Liberalism, Part 3 – Catholic World Report. This is the third and last part of my discussion of Thomism and political liberalism. 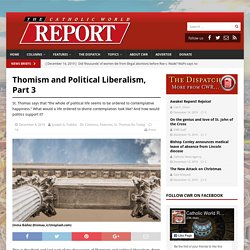 From the first two essays (see here and here) I think that we can conclude that one important thing that separates Thomistic and liberal political theory and makes them rival visions is their understanding of the ultimate purpose of politics. For Thomists, I have argued, politics aims at facilitating a life of divine contemplation whereas, for liberal theorists, it would seem that politics aims at securing the freedom of individual persons to live as they like, so long as they respect the freedom of others to do the same.

(I have called this added condition the “freedom of others proviso” or FOP.) In my last essay I quoted a text from St. Thomas’s Summa contra gentiles that supports what I am saying about the Thomistic understanding of politics’ purpose. What would a life ordered to divine contemplation look like? What Liberalism Lacks. I find the liberalism v. illiberalism template tiresome. 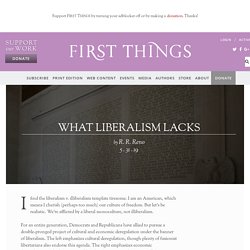 I am an American, which means I cherish (perhaps too much) our culture of freedom. But let’s be realistic. We’re afflicted by a liberal monoculture, not illiberalism. For an entire generation, Democrats and Republicans have allied to pursue a double-pronged project of cultural and economic deregulation under the banner of liberalism. Integralism in Three Sentences – The Josias. Outline Introduction What is the Josias?

The Editors Integralism in Three Sentences Edmund Waldstein, O.Cist. Table of Contents – The Josias. Outline Introduction What is the Josias? 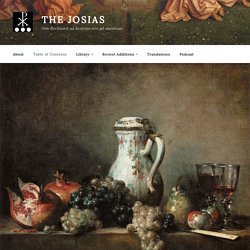 The Apostolate of Politics. The Relations of the Spiritual and Civil Powers – The Josias. Henry Edward [Manning], Archbishop of Westminster Henry Edward Manning (1808-1892) was one of the most important figures in the formation of modern Catholic Social teaching. A convert from Anglicanism, Manning was enthroned as the second Archbishop of Westminster in 1865, fifteen years after the restoration of the Catholic hierarchy in England.

In 1875 he was made a cardinal of the Holy Roman Church. Manning had a life-long interest in political economy, and his intervention in the London dock-strike of 1889 was one of his many contributions to the Catholic response to the ‘social question’ of the 19th century. But another life-long interest of his was the relation of Church and state. Gladstone was enraged by the First Vatican Council’s definition of Papal infallibility in 1870. Liberalism and the Black Legend. «Liberalism», a wise pastor once admonished the world, «is a sin». It is both a sin against faith and against the moral order: «In the doctrinal order, it is heresy, and consequently a mortal sin against faith.

“According to Truth” – The Josias. One of the most curious features of life under political liberalism—for present purposes, the doctrine that the central task of politics is to promote individual autonomy and to secure its preconditions—is that all politics and political conversation happens at one step removed, one meta-level up. Instead of pursuing substantive excellence and justice, we have circuitous conversations about statistical properties like “diversity”; instead of deciding what ought to be permitted, what condemned, we debate “civility”; instead of discerning truth, we quarrel over “religious liberty”; instead of protecting the most vulnerable, we conceal our vices and crimes under the rubric of “choice,” in both market and non-market spheres (although to be fair there are almost no non-market spheres left any more).

When we ask about Truth, liberalism answers “What is ‘Truth’? The legends of liberalism – Semiduplex. The Notre Dame Center for Ethics and Culture had its fall conference not too long ago. This year, the conference explored the relationship between Church and state. It closed with a panel discussion between Harvard Law’s Adrian Vermeule, Gladden Pappin of the University of Dallas, Patrick Deneen, and V. Philip Muñoz, both of Notre Dame. Rod Dreher basically liveblogged the proceedings and offered a characteristically behemoth post summarizing his thoughts. Gelasian Dyarchy at Notre Dame – The Josias. By Edmund Waldstein, O.Cist. What Is Integralism Today? In the Catholic Church old debates that might seem to have been left behind are constantly returning. Two elements in the Liberal tradition. September 4, 2018 at 10:09 am (Uncategorized) If Liberalism means to take the advance of liberty as the fundamental concern we’d expect it to have two elements. Liberty is our state apart from established structures of power, and so we advance liberty either by maximizing the amount of life lived apart from these structures or by undertaking their radical reform.

All sides agree that structures of power are corrupt to their bones but one side takes this as requiring thick walls to keep the corruption apart from the pure and the other takes it as demanding radical reform by the pure. The Civic Project of American Christianity by Michael Hanby. George Weigel responds to Michael Hanby in his essay “To See Things As They Are. . “ On Society and Culture: the Polis, Modernity, and Donar’s Oak – The Josias. Hard Liberalism, Soft Liberalism, and the American Founding – The Josias. The principle of Plato’s cycle of regimes. 1.) Edward Feser: Liberty, equality, fraternity? Buckley Era anti-nationalism. -The argument of Liberal Fascism is that the nationalist/internationalist dichotomy is not fundamental or even essential to the political Right/Left. Socialism and central planning is leftism whether internationalist or nationalist, and free markets and… uh… not-central planning is conservatism or the right, whether nationalist or internationalist.

This “not-central planning, but not nationalist” philosophy was central to the contemporary Right in what might be called the Buckley Era, running roughly from Whittaker Chambers’s conversion in 1952 (or the nomination of Goldwater a decade later) until the last election. -Until the end of the Cold War The Right didn’t need to define what “not-central planning” was since it was obvious: not-Soviet Russia. This set the bar so ridiculously low for what would count as “non-centrally planned” that almost everyone could clear it. Alasdair MacIntyre: From Socratic Subverter to Supporter of the State. I. What Alasdair MacIntyre Knows. More than a Passing Fancy. Tolerance and Natural Law. The Strange Second Life of Confessional States. Neutered by Neutrality: The Abiding Influence of John Rawls, Part Two. Defeated by Default: The Abiding Influence of John Rawls, Part One.

The legal outcome of too many morally contentious political issues in our time is now guaranteed in advance.

Community and Civil Society (Tonnies) 4 Reasons Aquinas On Rights And Modern Individual Rights Are Very Different. Liberalism and Islam. What "Social Justice" Really Means. R. A. Markus, Saeculum VI — Coge Intrare. "Sacred and Inviolable": Rerun Novarum and Natural Rights. Catholic Social Teaching – A Reading List. The Impossibility of Secular Society by Rémi Brague. ‘In Dread of Modernity’: Republican Liberty and the Common Good in the American Tradition. Locke’s Doctrine of Toleration: A Contract with Nothingness. Logos and Leviathan: Leonine Perspectives on Democracy. The Dignity of Politics and the End of the Polity. Is marriage ‘pre-political’? The Duties and Rights of Subjects toward the Civil Power. Political Philosophy of Alasdair MacIntyre. The Good, the Highest Good, and the Common Good. Constitutional Democracy vs. the Common Good. The transcendental good. Age of Exhaustion.