Reparations for slavery is the idea that some form of compensatory payment needs to be made to the American descendants of slaves who had been enslaved as part of the slave trade.

The most notable demands for reparations have been made in the United Kingdom and in the United States. The future of race in America: Michelle Alexander at TEDxColumbus. 6/26/19: Nothing but the Truth: Q&A With Bryan Stevenson of True Justice. The Case for Reparations by Ta-Nehisi Coates. Editor’s Note: We’ve gathered dozens of the most important pieces from our archives on race and racism in America. Find the collection here. And if thy brother, a Hebrew man, or a Hebrew woman, be sold unto thee, and serve thee six years; then in the seventh year thou shalt let him go free from thee.

And when thou sendest him out free from thee, thou shalt not let him go away empty: thou shalt furnish him liberally out of thy flock, and out of thy floor, and out of thy winepress: of that wherewith the LORD thy God hath blessed thee thou shalt give unto him. And thou shalt remember that thou wast a bondman in the land of Egypt, and the LORD thy God redeemed thee: therefore I command thee this thing today. — Deuteronomy 15: 12–15 — John Locke, “Second Treatise” By our unpaid labor and suffering, we have earned the right to the soil, many times over and over, and now we are determined to have it. — Anonymous, 1861 I. 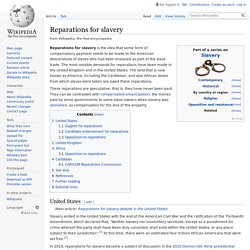 The most notable demands for reparations have been made in the United Kingdom and in the United States. The land that is now known as America, including the Caribbean, and also African states from which slaves were taken are owed these reparations. These reparations are speculative; that is, they have never been paid. They can be contrasted with compensated emancipation, the money paid by some governments to some slave owners when slavery was abolished, as compensation for the loss of the property. 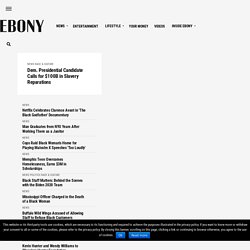 On Thursday, she sat down on CNN’s New Day, where she said the United States needs to pay African-Americans reparations for slavery. “We need a moral and spiritual awakening in the country,” the candidate stated. “Nothing short of that is adequate to really fundamentally change the patterns of our political dysfunction.” Her platform includes proposal for public college, universal health care, Medicare for all, a green new deal and $10 billion per year for slavery reparations to be paid over the course of a decade.

“I believe $100 billion given to a council to apply this money to economic projects and educational projects of renewal for that population is simply a debt to be paid,” Williamson said. Reparations — Nice White Ladies. 1/19/19: 2 women from families w/slaves make reparations payments. CENTENNIAL, Colo. 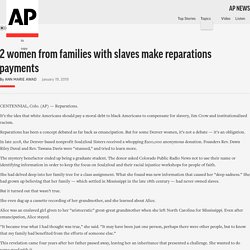 (AP) — Reparations. It’s the idea that white Americans should pay a moral debt to black Americans to compensate for slavery, Jim Crow and institutionalized racism. Reparations has been a concept debated as far back as emancipation. But for some Denver women, it’s not a debate — it’s an obligation. In late 2018, the Denver-based nonprofit Soul2Soul Sisters received a whopping $200,000 anonymous donation.

The mystery benefactor ended up being a graduate student. She had delved deep into her family tree for a class assignment. But it turned out that wasn’t true. She even dug up a cassette recording of her grandmother, and she learned about Alice. Text - H.R.40 - 115th Congress (2017-2018): Commission to Study and Develop Reparation Proposals for African-Americans Act. Veteran Congressman Still Pushing for Reparations in a Divided America. Slavery. ‘Better Is Good’: Barack Obama's Interview With Ta-Nehisi Coates - The Atlantic.

Coates: So it didn’t surprise you at all? 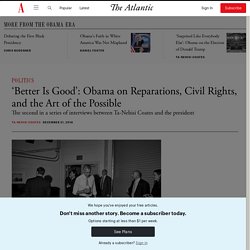 Obama: No. I think, and look, Ta-Nehisi, I don’t want to discount those criticisms, but offsetting those criticisms is that I have 90 percent or 95 percent support in the African American community and it’s not sort of “Well, he’s black, so it’s okay. Restorative Justice. Racism. Justicia. 2/28/19: Why wealth equality remains out of reach for the majority of black Americans. Black History Month has become the time to reflect on all the progress black Americans have made, but the sobering reality is that when it comes to wealth – the paramount indicator of economic security – there has been virtually no progress in the last 50 years. 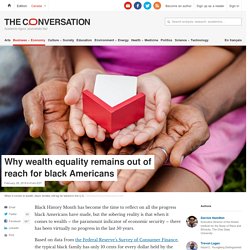 Based on data from the Federal Reserve’s Survey of Consumer Finance, the typical black family has only 10 cents for every dollar held by the typical white family. While there is no magic bullet for racism, access to wealth, and the security to pass it down from one generation to the next, would go a long way toward changing the economic trajectory for blacks. As researchers who study historical and contemporary racial inequality, we mostly conceive of wealth as a maker of success, but its true value is functional: the independence and economic security that it provides. NAACP Legal Defense and Educational Fund. Respect.