Activism. Types of activism[edit] Some activists try to persuade people to change their behavior directly, rather than to persuade governments to change or not to change laws. 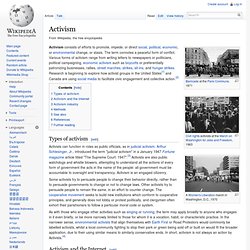 Other activists try to persuade people to remain the same, in an effort to counter change. The cooperative movement seeks to build new institutions which conform to cooperative principles, and generally does not lobby or protest politically, and clergymen often exhort their parishioners to follow a particular moral code or system. As with those who engage other activities such as singing or running, the term may apply broadly to anyone who engages in it even briefly, or be more narrowly limited to those for whom it is a vocation, habit, or characteristic practice. Activism and the Internet[edit] For more than ten years, groups involved in various forms of activism have been using the Internet to advance organizational goals.

Public Theater. Understanding Foxconn. Progressive news and potical commentary. How Often Should I Charge My Gadget's Battery to Prolong Its Lifespan? Apps for Professional Development. Twitter App (free) Twitter is one of the most active and beneficial social networks on the web. 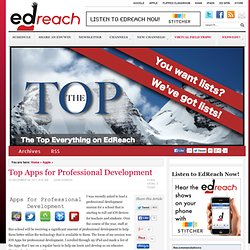 All educators would be wise to join the conversation. If you haven’t used Twitter yet, I would recommend that you read these excellent blog posts: Google Voice (free) Text and call for free! Skype (free) A beautiful app that allows you to make and receive VOIP calls on your iOS device.

Index of / Secrets of the Federal Reserve. The Creature from Jekyll Island, The Federal Reserve, talk by Edward Griffin. We'll start way back in history to give some kind of historical perspective to this; we'll go back to the first century BC and the tiny kingdom of Phrygia. 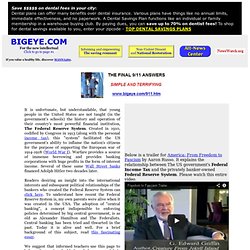 There was a philosopher by the name of Epictetus and it was Epictetus who said "Appearances are of four kinds: things either are as they appear to be; or they neither are nor appear to be; or they are but do not appear to be; or they are not and yet appear to be. " When I read that statement for the first time, I had a big chuckle over it and I thought for sure that if Epictetus were alive today he would probably be a Harvard professor of money and banking; it sounds like so many explanations that I have read about various aspects of the Federal Reserve System. What he did was he took a fairly simple concept but by the time that he was through explaining it, we didn't have any idea what he was talking about. All Epictetus said was that appearances can sometimes be deceiving. I don't know what you think about those seven points. The Dominique Strauss-Kahn Case Revisited. By Jonathan Z. 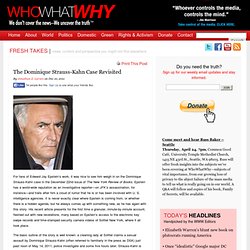 Larsen on Dec 10, 2011 For fans of Edward Jay Epstein’s work, it was nice to see him weigh in on the Dominique Strauss-Kahn case in the December 22nd issue of The New York Review of Books. Epstein has a world-wide reputation as an investigative reporter—on JFK’s assassination, for instance—and trails after him a cloud of rumor that he is or has been involved with U. S. intelligence agencies. It is never exactly clear where Epstein is coming from, or whether there is a hidden agenda, but he always comes up with something new, as he has again with this story. The basic outline of the story is well known: a cleaning lady at Sofitel claims a sexual assault by Dominique Strauss-Kahn (often referred to familiarly in the press as DSK) just past noon of May 14, 2011; police investigate and some five hours later, Strauss-Kahn is pulled off an Air France plane by police and jailed on seven counts, including attempted rape and sexual abuse.

The Saudi Arab Spring Nobody Noticed. By Russ Baker on Dec 7, 2011 Hear the one about the Arab Spring in Saudi Arabia that nobody noticed? 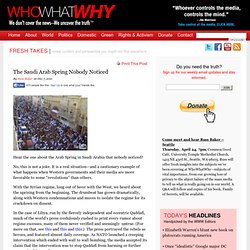 No, this is not a joke. It is a real situation—and a cautionary example of what happens when Western governments and their media are more favorable to some “revolutions” than others. With the Syrian regime, long out of favor with the West, we heard about the uprising from the beginning. The drumbeat has grown dramatically, along with Western condemnations and moves to isolate the regime for its crackdown on dissent. In the case of Libya, run by the fiercely independent and eccentric Qaddafi, much of the world’s press credulously rushed to print every rumor about regime excesses, many of them never verified and seemingly untrue. The media quickly took to—and stayed with— the uprising in Egypt, one of the poorest countries in the region, where the West lost an ally but quickly found a new collaborator in a similarly-inclined military junta.

The purported context comes in the final paragraph:

Related:  kpjete   -  How Often Should I Charge My Gadget's Battery to Prolong Its Lifespan?   -  Apps for Professional Development   -  Education   -  Enterprise