Burma’s Ex-Religion Minister Gets 13 Years for Graft, Sedition. Former Religious Affairs Minister Hsan Hsint, seen here before a court hearing on July 3, has been sentenced to 13 years in prison. 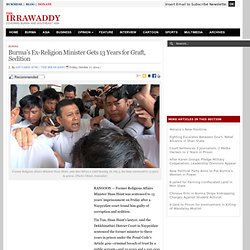 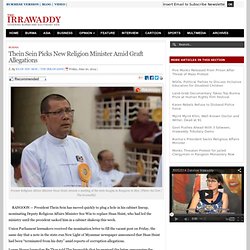 (Photo: Sai Zaw / The Irrawaddy) RANGOON — President Thein Sein has moved quickly to plug a hole in his cabinet lineup, nominating Deputy Religious Affairs Minister Soe Win to replace Hsan Hsint, who had led the ministry until the president sacked him in a cabinet shakeup this week. Union Parliament lawmakers received the nomination letter to fill the vacant post on Friday, the same day that a note in the state-run New Light of Myanmar newspaper announced that Hsan Hsint had been “terminated from his duty” amid reports of corruption allegations. Lower House lawmaker Pe Than told The Irrawaddy that he received the letter announcing the president’s choice for Hsan Hsint’s replacement on Friday. 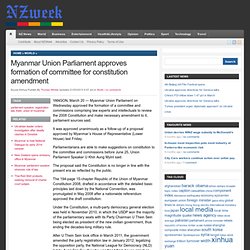 It was approved unanimously as a follow-up of a proposal approved by Myanmar’s House of Representative (Lower House) last Friday. Parliamentarians are able to make suggestions on constitution to the committee and commissions before June 25, Union Parliament Speaker U Khin Aung Myint said. Burma dissolves censorship office, but needs to dump media oppressive laws. Burma's police: The long road to reform. Andrew Selth is a Research Fellow at the Griffith Asia Institute and author of Burma's Police Forces: Continuities and Contradictions.

Last week, television viewers in Burma were treated to a remarkable sight: the police force formally apologising for using excessive force to break up a protest at a mine site, and injuring more than 20 Buddhist monks. FDI Law Passed with $5m Restriction Dropped.

Political prisoners issue in Burma. Suu Kyi speech 'censored' ADB Preparing First Myanmar Projects in 25 Years as Thein Opens. Myanmar's Suu Kyi says reforms could be reversed. Burma reforms: Foreigners can't take much credit. Andrew Selth is a Research Fellow at the Griffith Asia Institute. After the Bay of Pigs fiasco in 1961, JFK ruefully observed that success has many fathers but failure is an orphan. Albeit from the opposite perspective, this old saw can be applied to Burma today. For, despite 20 years of unsuccessful and frustrating diplomacy, there is no shortage of people and organisations now claiming credit for Naypyidaw's welcome but unexpected reform program. As stated in The Interpreter recently, the remarkable paradigm shift which took place in Burma last year was due mainly to internal developments and a few key local personalities.

External factors played a role but they were incidental to the main game. Firstly, Burma demonstrates once again that the international community is limited in its ability to influence the behaviour of states which are determined to go their own way. A third issue is the importance of strategic imperatives. Burmese Trade Minister Promises More Reforms. A top Burmese official is promising the international community that his country's military-backed government is not done implementing democratic reforms. 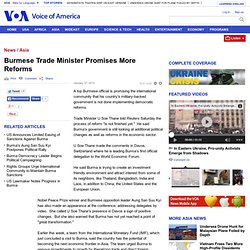 Trade Minister U Soe Thane told Reuters Saturday the process of reform "is not finished yet. " He said Burma's government is still looking at additional political changes as well as reforms in the economic sector. Burma law to allow labour unions and strikes. 14 October 2011Last updated at 16:16 Under the law, Burmese workers will be allowed to strike as long as they observe a notice period Workers in Burma will be allowed to form unions and go on strike under a new law signed this week by the president, officials say. 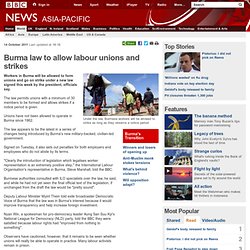 The law permits unions with a minimum of 30 members to be formed and allows strikes if a notice period is given. Responding to Burmese Reform. By Murray Hiebert, Senior Fellow & Deputy Director, and Greg Poling, Research Assistant, Southeast Asia Program, CSIS October 12, 2011 Burma may be in the midst of the most significant political reform since the 1960s when the military seized control.

No one can be sure if these changes will take hold and how far they will go, but it is critical for the United States to recognize what is happening, encourage those pressing for change, and start to consider steps to help end the country’s decades of isolation. Responding to Burmese Reform. Burma may be in the midst of the most significant political reform since the 1960s when the military seized control.

No one can be sure if these changes will take hold and how far they will go, but it is critical for the United States to recognize what is happening, encourage those pressing for change, and start to consider steps to help end the country’s decades of isolation. Burmese president Thein Sein stunned the world and his people when he announced on September 30 that construction by a Chinese company of the controversial Myitsone dam would be suspended immediately. The dam would have flooded an area the size of Singapore and by many accounts would have slowed the flow of the Irrawaddy River enough to cause widespread damage far downstream.

The decision was a victory for environmental crusaders both inside and outside Burma. Blog Archive » Signs of Change in Burma? Aung San Suu Kyi, leader of Myanmar's democratic opposition, smiles to supporters August 14, 2011 (Soe Zeya Tun/Courtesy Reuters). Since the highly suspect national “elections” held in Burma last November, Burmese activists and average Burmese citizens have been looking for any signs that the new, civilian government , would be any different from decades of venal and ruthless military regimes that have ruled the country. For months, there were very few signs. Though the new president, Thein Sein, has reputedly reformist tendencies, many Burma watchers have reported that he has had to fight with a group of reactionary hard-liners who have been put in power essentially to check him. Most notably, Asia Times has reported that Vice President Thin Aung Myint Oo, a hard-liner, has effectively stood in the way of any real change that Thein Sein has promoted.

Is Burma's Government Taking Small Steps Toward Reform? A cabal of military men has ruled Burma for nearly half a century, often with unfathomable cruelty. 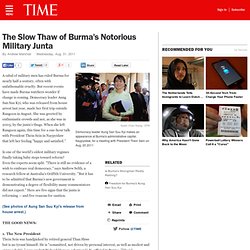 But recent events have made Burma watchers wonder if change is coming. Democracy leader Aung San Suu Kyi, who was released from house arrest last year, made her first trip outside Rangoon in August. She was greeted by enthusiastic crowds and not, as she was in 2003, by the junta's thugs. When she left Rangoon again, this time for a one-hour talk with President Thein Sein in Naypyidaw that left her feeling "happy and satisfied.

" Is one of the world's oldest military regimes finally taking baby steps toward reform? 1. 2. 3. 4. 5. 1. Burma's New Political Dynamics. The recent landmark talks between democracy icon Aung San Suu Kyi and President Thein Sein may have set the pace for significant reforms but much will depend on the government releasing political prisoners, perhaps in stages. 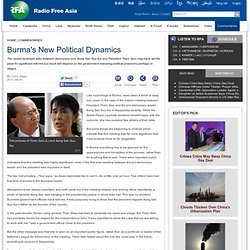 Like most things in Burma, news takes a while to seep out—even in the case of the historic meeting between President Thein Sein and the pro-democracy leader Aung San Suu Kyi in Naypyidaw recently. While the Nobel Peace Laureate declared herself happy with the outcome, she has revealed few details of their talks. But some things are beginning to emerge which indicate that this meeting was far more significant that most analysts have so far suggested. 'Positive Beginning' In her latest weekly conversation with listeners, Aung San Suu Kyi offers hope for a resolution to Burma's prolonged ethnic conflict. 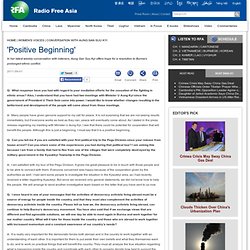 Burma/Myanmar round-up. The last few weeks have provided an interesting snapshot of the Myanmar/Burma debate. 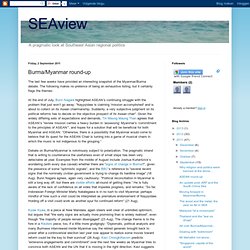 The following makes no pretence of being an exhaustive listing, but it certainly flags the themes: