Austenistan. ?articles. ISTOCK, SMARTBOY10In his 1945 Nobel Prize lecture, Alexander Fleming included the directive, “If you use penicillin, use enough.” 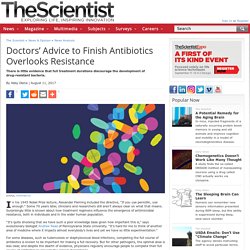 Some 70 years later, clinicians and researchers still aren’t always clear on what that means. Surprisingly little is known about how treatment regimens influence the emergence of antimicrobial resistance, both in individuals and in the wider human population. “It’s quite shocking that we have such a poor knowledge base given how important this is,” says evolutionary biologist Andrew Read of Pennsylvania State University. 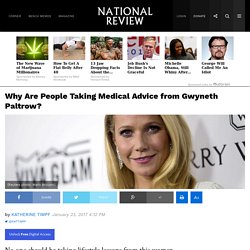 Oh, and it gets worse: The item is sold out on Goop’s online store — which means that actual people are actually doing this. (Note: In case you yourself happen to be sitting there with an overpriced rock in your crotch because the lady from Shallow Hal told you to put it there, please, please just know that it’s not a good idea. As Dr. Jen Gunter, an OB/GYN for Kaiser Permanente in San Francisco, told the Washington Post, not only is it “biologically impossible” for a rock to have an effect on your hormones, but it’s also a great way to cause problems like bacterial vaginosis and toxic shock syndrome. How 30 days without Social Media changed my life. 30 days ago, I made the decision to give up social media for a month. 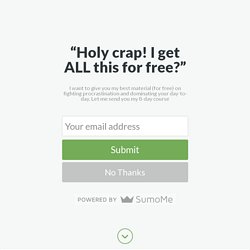 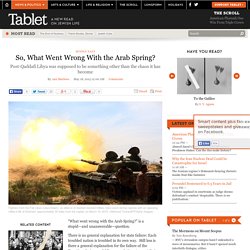 Is a stupid—and unanswerable—question. There is no general explanation for state failure: Each troubled nation is troubled in its own way. Still less is there a general explanation for the failure of the Egyptian, Syrian, and Libyan revolutions to meet their peoples’ hopes; the three countries are as different each from the other in size, population, economy, and political culture as, say, Ukraine, Belgium, and France. “Why did Libya’s revolution lead to chaos?” Is an answerable question and probably the main reason general readers will pick up Peter Cole and Brian McQuinn’s new anthology, The Libyan Revolution and its Aftermath.

Libya is best understood as a collection of city-states, more like 15th-century Italy than anyplace else. What Does Slavery Look Like Today. Giving away ‘Anatoly Z.’ 'Anatoly Z' works his stick skateboard outside his home. 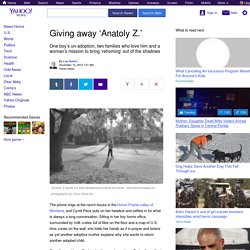 (Illusrations based on photography by Chris Usher for … The phone rings at the ranch house in the Horse Prairie valley of Montana, and Cyndi Peck puts on her headset and settles in for what is always a long conversation. Sitting in her tiny home office, surrounded by milk crates full of files on the floor and a map of U.S. time zones on the wall, she folds her hands as if in prayer and listens as yet another adoptive mother explains why she wants to return another adopted child. Over the next hour, Peck asks the usual questions. Today the caller is a Tennessee kindergarten teacher who adopted a former student out of foster care about a year ago only to realize she cannot handle the girl’s emotional and psychological wounds.

Does Anti-Semitism Make You Poor? Hatred, it turns out, costs money, and just as hatred can be handed down from generation to generation, so can its financial costs. 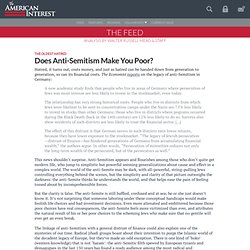 The Economist reports on the legacy of anti-Semitism in Germany: A new academic study finds that people who live in areas of Germany where persecution of Jews was most intense are less likely to invest in the stockmarket, even today. The relationship has very strong historical roots. Greater Rates of Mitochondrial Mutations Discovered in Children Born to Older Mothers : MEDICINE & HEALTH : The Science Times. The discovery of a "maternal age effect" by a team of Penn State scientists that could be used to predict the accumulation of mitochondrial DNA mutations in maternal egg cells -- and the transmission of these mutations to children -- could provide valuable insights for genetic counseling. 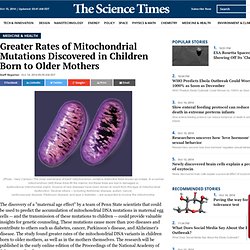 These mutations cause more than 200 diseases and contribute to others such as diabetes, cancer, Parkinson's disease, and Alzheimer's disease. The study found greater rates of the mitochondrial DNA variants in children born to older mothers, as well as in the mothers themselves. The research will be published in the early online edition of the Proceedings of the National Academy of Sciences on October 13, 2014.

Like Us on Facebook Mitochondria are structures within cells that produce energy and that contain their own DNA. Click on the image for a high-resolution version. The study led to another important discovery about egg-cell development. Student Course Evaluations Get An 'F' : NPR Ed. You're next. 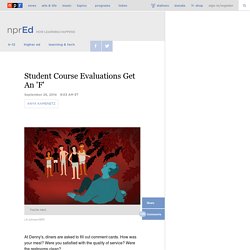