US of A Political Visions

Even The Biggest Scandals Can’t Kill Party Loyalty. There have been lots of questions, especially among liberals, about when congressional Republicans might turn on President Trump, particularly in the wake of his controversial firing of FBI Director James Comey and the reports late Monday that he compromised classified information. 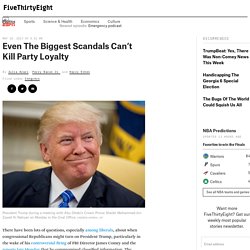 News through the eyes of cartoonists. Wilkerson: Trump "Needs a Good War" and Pence is Waiting in the Wings to Lead It. Cookies are Not Accepted - New York Times. Why Opposing Trump Isn't Like the GOP Obstructing Obama - Rolling Stone. In the 230-year period between the ratification of the U.S. 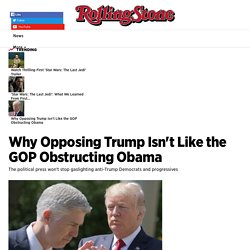 Constitution and Barack Obama's election, opposition parties blocked a grand total of 68 presidential nominees. In the three years and 10 months between Obama's inauguration and then-Senate Majority Leader Harry Reid's move to eliminate the filibuster for lower court nominees, Republicans had blocked 79 of them – that's 54 percent of the historic total in just under four years. Last week, the current Senate majority leader, Mitch McConnell, moved to eliminate the filibuster for Supreme Court nominees after the Democrats filibustered Donald Trump's pick, Neil Gorsuch, who had come off as aloof and unresponsive during his confirmation hearings and offered no reason for refusing to meet with two (women) Democratic senators.

Obama's nominee for the seat, Merrick Garland, is the only candidate in the history of the United States to be denied a hearing by the opposition. Rep. Joe Wilson Shouted Down by "You Lie" Chants During Angry Town Hall. Pablo Martinez Monsivais/AP More than eight years after Rep. 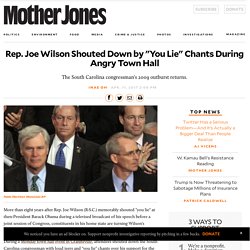 Joe Wilson (R-S.C.) memorably shouted "you lie" at then-President Barack Obama during a televised broadcast of his speech before a joint session of Congress, constituents in his home state are turning Wilson's infamous outburst against him. During a Monday town hall event in Graniteville, attendees shouted down the South Carolina congressman with loud jeers and "you lie" chants over his support for the Trump administration and efforts to repeal the Affordable Care Act. According to the Post and Courier, the most raucous exchange occurred when Wilson, who in 2013 voted against extending the Violence Against Women Act, told the crowd he had advocated to protect women against violence. The event comes on the heels of similar events nationwide, where Republican elected officials have been met by angry protests in their home districts over concerns about various White House policies.

House Republicans Are Helping Donald Trump Keep His Tax Returns Secret. Watch: Kayleigh McEnany gets into shouting match with CNN conservative after he calls Conway ‘laughable’ Trump advocate Kayleigh McEnany and a fellow conservative got into a shouting match Tuesday night when she attempted to defend the president’s habit of lying right after she grew offended that he called Kellyanne Conway’s earlier CNN interview, “laughable.” 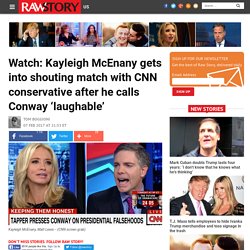 During a panel discussion on Conway’s interview with CNN’s Jake Tapper, conservative CNN regular Matt Lewis accused the Conway of having “five schticks” when it comes to answering questions from the media. Addressing the Tapper interview, Lewis explained, “Here I think she was playing the ‘This has all been a big mistake’ act and I think it was pretty laughable.” Before McEnany was allowed to respond, host Anderson Cooper pointed out that Trump promised that he “would never lie” while on the campaign trail, before adding, “Daily there are things that are demonstrably false coming from the White House.” 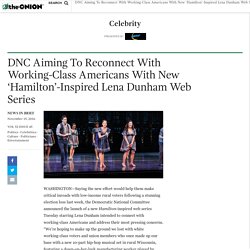 To know what President Clinton will really do, listen to what she says. Sean Hannity Suddenly Loves Julian Assange Now That He’s Anti-Hillary. The Fox News host once called for the WikiLeaks founder’s arrest. 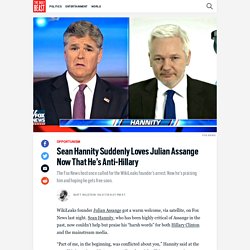 Now he’s praising him and hoping he gets free soon. WikiLeaks founder Julian Assange got a warm welcome, via satellite, on Fox News last night. Sean Hannity, who has been highly critical of Assange in the past, now couldn’t help but praise his “harsh words” for both Hillary Clinton and the mainstream media. “Part of me, in the beginning, was conflicted about you,” Hannity said at the top of his interview with Assange on Tuesday night. Sean Hannity's Tirade in Response to Jon Stewart's Criticism. Jon Stewart's return to the world of political commentary—a ten-minute appearance on The Late Show with Stephen Colbert on Thursday—forced most liberal-minded folks to their knees to laugh uncontrollably, cry tears of joy, pray to the comedy gods for our good fortune, or some combination of the three. 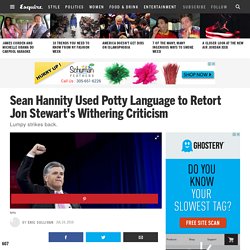 Conservatives, on the other hand, were pissed. Advertisement - Continue Reading Below. Congress ready to ban 'pay for patriotism' salutes at sports events. WASHINGTON — Taxpayer-financed salutes to U.S. troops at sporting events would be banned under legislation setting U.S. defense policy for the next 12 months.

The National Defense Authorization Act, as agreed to by congressional negotiators, would ban such activities as the "hometown heroes" promotion at New York Jets' home games featuring members of the New Jersey Army National Guard. Overall, the Defense Department paid 14 NFL teams $5.4 million from 2011 to 2014 for such promotions, dubbed as "pay for patriotism. " The bill also seeks a study of all existing sports sponsorships and advertising deals. EARLIER: Jets' salutes honor N.J. Oath Keepers: The heavily armed white vigilantes in Ferguson, explained. Police and protesters in Ferguson, Missouri, now appear to agree on at least one thing: A new group of heavily armed white men in the St. 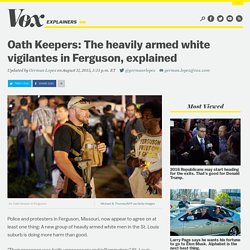 Louis suburb is doing more harm than good. "Their presence was both unnecessary and inflammatory," St. Louis County Police Chief Jon Belmar said, according to Reuters. Huffingtonpost. The Democratic Party Would Triangulate Its Own Mother. Barack Obama made headlines this week by taking on Sen. 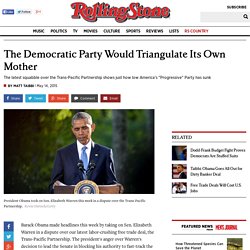 Elizabeth Warren in a dispute over our latest labor-crushing free trade deal, the Trans-Pacific Partnership. The president's anger over Warren's decision to lead the Senate in blocking his authority to fast-track the TPP was heavily covered by the Beltway media, which loves a good intramural food fight. No cure for the diseases of American democracy?   The American political system is a mess, but don’t expect that introducing reform and changing how the government is structured will cure all the diseases of American democracy.

There is no magic bullet. No simple panacea. David Brooks Wants Gay Rights Advocates To 'Go Gently' With Their Opposition. Fugelsang: ‘If You Don’t Like Gay People, Take It Up With The Manufacturer’ A Frightful Prospect: Hillary vs. Jeb. Around the world, elections happen; they are scheduled or called and then they are over and done with – all in short order. America is “exceptional.” Even before 2015’s April showers, 2016’s November election is taking shape. The good news is that the first six months are usually low key. 5 Powerful Shifts Transforming America Society into an Unrecognizable and Frightening Future. To stay on top of important articles like these, sign up to receive the latest updates from TomDispatch.com here.

Have you ever undertaken some task you felt less than qualified for, but knew that someone needed to do? Consider this piece my version of that, and let me put what I do understand about it in a nutshell: based on developments in our post-9/11 world, we could be watching the birth of a new American political system and way of governing for which, as yet, we have no name. Tea Partiers Are Right: Jeb Bush Is a RINO.

By Matt Taibbi | So Jeb Bush might be running for president. Hucksters, hawks, and charlatans: the GOP’s 10 most clownish 2016 presidential candidates. Rick Perlstein: “Ronald Reagan absolved America almost in a priestly role not to have to contend with sin. The consequences are all around us today” The most frightening candidate I’ve met in seven years interviewing congressional hopefuls. Jon Stewart Mocks Media 'Chaos' Over Obamacare Ruling. U.S. Citizenry Admits It Could Kind Of Go For Charismatic Authoritarian Dictator. WASHINGTON—According to a Pew Research Center poll conducted this week, the overwhelming majority of Americans admitted they would actually be fairly interested in having a magnetic, forceful dictator oversee and control all aspects of American society.

How bad would Mitt be? With the polls showing a tightening race, a Mitt Romney presidency is becoming a real possibility. Mitt Romney: Income Equality Concerns Are The 'Politics Of Envy' Gov. Mitt Romney Blocked Birth Certificates To Gay Parents; Felt They Are Unfit And Kids Would Be Developmentally Impaired. Does Congress Get a Passing Grade on Science? The Romney-Cheney Doctrine - By Representative Adam Smith. Gary Johnson: Mitt is ‘without one molecule of brain’ Charlie Fuqua, Arkansas Legislative Candidate, Endorses Death Penalty For Rebellious Children In Book. Voting for Death. The Problem With Massachusetts And Elizabeth Warren. VIDEO: Romney says he's for the "100 percent."

Longing-Machines. Closer Than You Think: Top 15 Things Romney and Obama Agree On. Counterpunch: Tells the Facts, Names the Names. Romney's Video Remarks Have Deep GOP Roots. No Victors Yet in 2 G.O.P. Challenges to Backers of Marriage Bill. The Democratic Party is a Big Fraud. Ask The Democrats: Can We Trust Romney With Obama’s Kill List? Obstruct and Exploit. At the Democratic Convention, the Words Being Used - Interactive Feature. Obama and Romney Tackle 14 Top Science Questions. Read Obama and Romney's answers to the country's top science questions. Republicans Cross the Rubicon. The 2012 People's Party Congress of Charlotte - The Colbert Report - 2012-04-09. Jon Stewart Jabs Dems For Lukewarm DNC Opening With 'Yes We Can, But...' Chuck Norris Warns of Doom to Follow Obama's Re-election.