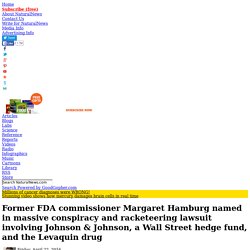 The lawsuit alleges that while acting as FDA commissioner, Margaret Hamburg engaged in a wide-ranging conspiracy to approve an extremely dangerous drug known to cause severe (and even deadly) side effects, in order to financially benefit her husband's hedge fund which held very large financial positions in Johnson & Johnson, makers of the drug. "Defendants, each and every one of them, operated a criminal conspiracy at least between the years 2009 to 2015 to fraudulently suppress warnings about the devastating effects of Levaquin," says the complaint. Once confirmed as FDA Commissioner, Dr. Margaret A. To further this conspiracy, Dr. Dr. Page. The Magazine - Obama’s Game of Chicken. November/ December 2012Obama’s Game of Chicken The untold story of how the administration tried to stand up to big agricultural companies on behalf of independent farmers, and lost. 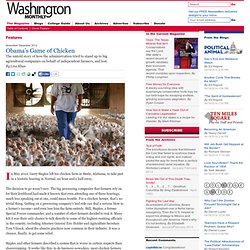 By Lina Khan In May 2010, Garry Staples left his chicken farm in Steele, Alabama, to take part in a historic hearing in Normal, an hour and a half away. The decision to go wasn’t easy. The big processing companies that farmers rely on for their livelihood had made it known that even attending one of these hearings, much less speaking out at one, could mean trouble. Staples and other farmers described a system that is worse in certain respects than sharecropping.

As Staples explained, a processing company can require a farmer to assume substantial debt to pay for new chicken houses, tailored to the company’s exact specifications. Staples told the crowd at the hearing that he feared that Pilgrim’s Pride, the processing company with which he contracts, might punish him for voicing his troubles. Marvin Resnikoff: Fracking: Has the USGS Been Co-opted by the Oil and Gas Industry? Known for its objective and scientifically rigorous research, the U.S. 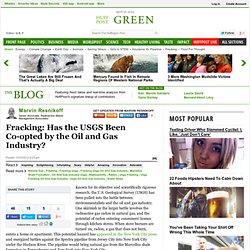 Geological Survey (USGS) has been pulled into the battle between environmentalists and the oil and gas industry. One skirmish in the larger battle involves the radioactive gas radon in natural gas, and the potential of radon entering consumers' homes through kitchen stoves. When stove burners are turned on, radon, a gas that does not burn, enters a home or apartment. This potential hazard has appeared in the New York City press and energized battles against the Spectra pipeline from Jersey City into New York City under the Hudson River. The pipeline would bring natural gas from the Marcellus shale formation in Pennsylvania and New York into New York City. Chemical Industry Uses Wallet To Block Tighter Regulations, Environmental Advocates Say. New numbers support that assertion: Tens of millions of dollars continue to feed industry friendly causes and candidates this election season, with federal campaign contributions and lobbying expenditures by the chemical industry more than doubling since 2000. 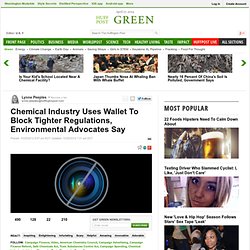 "The more the truth has gotten out about the chemical regulatory system not working; the more the science has shed light on the consequences for American families as they bear the burden of problems linked to environmental exposures such as learning disabilities, childhood cancer and breast cancer; I think the more it has increased demands for change," said Andy Igrejas, national campaign director for the nonprofit Safer Chemicals, Healthy Families. "And industry has ramped up its spending to block such a change," he added. The chemical and agro-chemical industries have generally argued that stiffer regulations would be overly burdensome to companies and costly to the country. Malkan, in turn, calls the No on 37 ads "deceptive. "