"His lack of governing experience, potential difficulties building relationships with congressional leaders, and inconsistent policy pronouncements during the race make it hard to predict his policy initiatives or his effectiveness in driving them through Congress."

Forbes, Nov 16. The Lincoln Project’s plan for preserving the union: Drive Trump out of office by driving him nuts. FOLK UKE - Small One (Lyric Video) Timeline of protests against Donald Trump. The following is a timeline of the protests against businessman, television personality, and 45th President of the United States, Donald Trump. 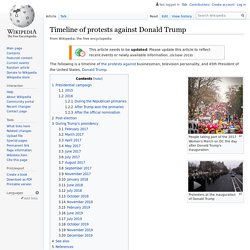 People taking part of the 2017 Women's March on DC the day after Donald Trump's inauguration. Protesters at the inauguration of Donald Trump Presidential campaign[edit] 2015[edit] Protests against Trump began following the announcement of his candidacy in June 2015, especially after he said that illegal immigrants from Mexico were "bringing drugs, bringing crime, their (not they're) rapists".[1][2] June 16 – Trump announced his candidacy for President of the United States.[3]June 29 – At a luncheon in Chicago, about 100 protesters gathered across from the City Club of Chicago to demonstrate.[1] 2016[edit] 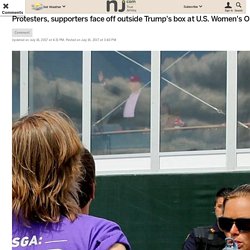 Women's Open on Sunday afternoon. The protesters, who are from the group UltraViolet, were moved back from the ropes at the edge of the spectator area by security. Several N.J. state troopers and local police officers surrounded them, and an event security guard asked to see their tickets. "This is a campaign that we've been working on for close to nine months, if not more," UltraViolet campaign director Emma Boorboor said. "Before Trump was even elected president, we launched a campaign calling on the USGA to not host the golf tournament on the course of a sexual predator. UltraViolet's protest, which began just after 3 p.m., stirred up tensions with some in the crowd. 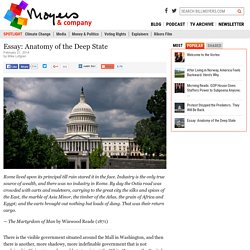 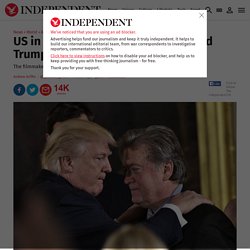 The filmmaker and journalist, who was one of the few famous people to publicly predict that Donald Trump would become President, has warned that the US state is being overthrown by Mr Trump and the people he has appointed to govern alongside him. Linking to a New York Times piece about the role of senior advisor Steve Bannon, he posted on Twitter: "If you're still trying to convince yourself that a 21st century coup is not underway, please, please snap out of it".

The controversial orders Donald Trump has already issued The article described how Mr Bannon, who until recently ran the far-right news site Breitbart News, had taken a major role in national security policy that usually would only be occupied by senior generals. That move was a major break with precedent and it and Mr Bannon himself have been credited with many of the extreme policy pronouncements coming from the White House in recent days. Man Without Grace Meets Party Without Conscience. Just one week into the Trump presidency, Republicans have already shown they are unwilling to stand up to the worst of his instincts. 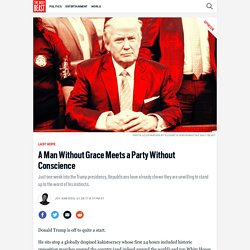 Donald Trump is off to quite a start. He sits atop a globally despised kakistocracy whose first 24 hours included historic opposition marches around the country (and indeed around the world) and top White House flaks beclowning themselves and eviscerating their credibility with shouted lies and the absurdity of “alternative facts.” Plan to Eliminate Natl Endowments for Arts & Humanities. The Hill has gotten a first look at the federal budget in the works by President-elect Donald Trump’s transition team, and it is, to put it mildly, brutal. 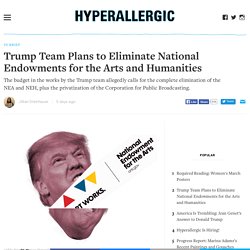 In an effort to reduce federal spending by $10.5 trillion over 10 years, the plan calls for the complete elimination of the National Endowment for the Arts (NEA) and the National Endowment for the Humanities (NEH). In addition, the Corporation for Public Broadcasting (CPB) would be privatized. Trump appears to be muzzling scientists just like Canada did. A North American nation elected a leader known for hostility to science and affection for the domestic oil industry. 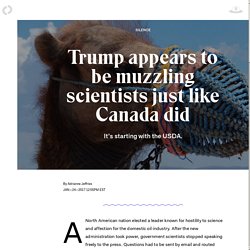 After the new administration took power, government scientists stopped speaking freely to the press. Questions had to be sent by email and routed through central approval. Scientists were told not to talk about hot-button issues including climate, oil, forestry, and other environmental concerns. They had to get approval to attend scientific conferences. Before submitting to peer-reviewed journals, they were asked to submit keywords and predict policy implications of their work to higher-ups.

That’s what happened in Canada after Prime Minister Stephen Harper was elected in 2006. According to an internal email sent Monday and obtained by BuzzFeed News, the Agricultural Research Service, which is responsible for about half of the agency’s $2.5 billion research and development budget, is shutting itself off from the public. How Trump’s White House Could Mess With Government Data. Numbers and data are a backbone of modern life. 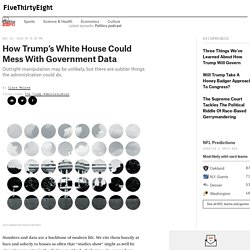 We cite them buzzily at bars and soberly to bosses so often that “studies show” might as well be given its own entry in the dictionary. Widget- Trump's Latest Press Conferences / Tweets. We've created this handy widget to track how long it has been since Donald Trump held a formal press conference and how many times he has tweeted in that time. 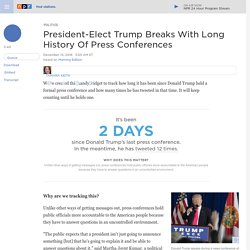 It will keep counting until he holds one. Donald Trump speaks during a news conference at Trump National Doral on July 27 in Doral, Fla. That was his last press conference. Evan Vucci/AP hide caption toggle caption Evan Vucci/AP. Trump campaign promise tracker - Washington Post. Donald Trump Insult Generator. Use Trump-Speak on Your Children. I have seen people answering questions and making statements in Trump-speak all over the Internet and I have decided this is brilliant idea to use on my children! 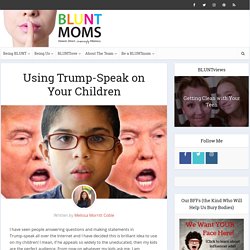 I mean, if he appeals so widely to the uneducated, then my kids are the perfect audience. From now on whatever my kids ask me, I am answering in Trump-speak. “Mom, what’s for dinner?” Well, let me tell you about dinner. Everyone keeps asking me about dinner. “I got a D on my math test.” Listen, you are just being a loser, okay? “Mom, I need some money.” Everyone is unemployed! “Mom, can I have a friend over after school?” Look, these people can’t keep coming over here. “Mom, I need some new socks” Listen, you cannot just go out and buy socks. “Mom, you don’t make any sense.” Listen, I’m just telling it like it really is. What are we talking about again? No Evidence Trump Told People Magazine Republicans Are the "Dumbest Group of Voters" Claim: Donald Trump said in 1998 that he would one day run as a Republican because they are the "dumbest group of voters.

" Origin:The above-reproduced image and quote attributed to Donald Trump began appearing in our inbox in mid-October 2015. The format is easily recognizable as one wherein questionable or offensive words are attributed to the individual pictured, and in this case image claims that Donald Trump made the following statement in a 1998 interview with People magazine: If I were to run, I'd run as a Republican. Trumps"To Call Today" List [Satire] – The Moderate Voice. Trump Tries to Woo Black Voters. Stock Market Slingshots Higher After Trump Victory Sparked Overnight Plunge. Donald Trump Cannot Be President of the United States. It's easy to make fun of the hats. It's not so easy to contemplate what makes so many people think America's greatness is in desperate need of reformation, or what would make them turn to someone like Donald Trump to make it a reality.

America has flaws as deep as its founding, when the men who laid down basic principles of human rights – principles that have endured 240 years – were fed and clothed by human beings they owned. That paradox still defines the fault lines of our nation, and it's along those lines we are drawing the ugliest election in modern history. Donald Trump and the truth about race and real estate in America. Trump Supporters React to Outrageous Campaign Ads. How cartoonists around the world have reacted to Donald Trump's Victory. 5 Reasons Why Trump Will Win. Friends: I am sorry to be the bearer of bad news, but I gave it to you straight last summer when I told you that Donald Trump would be the Republican nominee for president. And now I have even more awful, depressing news for you: Donald J. Trump is going to win in November.

This wretched, ignorant, dangerous part-time clown and full time sociopath is going to be our next president. Donald Trump to Visit Mexico After More Than a Year of Mocking It. What Republicans Really Think About Tump. Photo CLEVELAND — The arena here at the Republican National Convention echoes with applause for Donald Trump, but the cacophony and extravagant stage effects can’t conceal the chaos in the G.O.P. and in the Trump campaign. Republican senators suddenly are busy fishing, mowing the lawn or hiking the Grand Canyon; conservative celebrities mostly sent regrets.

This vacuum reflects the horror that many leading conservatives feel for their new nominee. Pundits like me are gnashing our teeth as Trump receives the presidential nomination of the party of Lincoln, but, frankly speaking, we don’t have much credibility in Cleveland since many of us aren’t all that likely to support a Republican nominee in any case. So instead of again inflicting on you my views of the danger of Trump, let me share what some influential conservatives said about him during the course of the campaign.

“He’s a race-baiting, xenophobic religious bigot. “We saw and looked at true hate in the eyes last year in Charleston. Donald Trump: Fearmonger in Chief. As human beings, our capacity to forget is astonishing, second only to our capacity to believe just about anything. So in 2016, we find ourselves in a place we never thought we'd be in this century: Witnessing, and in many cases supporting, the rise of leaders proposing such things as restricting freedoms of specific groups of people, sending political opponents to prison, employing crueler methods of torture, killing families for an individual's crimes, cracking down on the press and scapegoating entire ethnicities.

And unfortunately, it's not just Donald Trump, who at last night's debate refused to accept the legitimacy of the sitting President, the FBI, the election process, and, as moderator Chris Wallace put it, "the peaceful transition of power" in this country. Around the Western world, the Great Panic of 2016 is very real and very ugly, with various increasingly popular politicians and parties espousing nationalist policies that threaten democratic freedoms and human rights. The Election of Trump and the Struggle Ahead. 1. 4 key times presidential nominees failed to gain Senate confirmation.

Republicans are rushing to begin confirmation hearings for Cabinet appointments even before the FBI has finished its background checks. Trump’s victory spells trouble but also exciting, unimagined opportunities. A Donald Trump presidency is as unpredictable as it was unexpected. While some have welcomed the result, for many Americans, as for America’s friends and allies, there is a deep sense of unease about the future. Yet, strange as it may sound, the outcome of this election may depend more on what we make of it than on what Trump and his advisers intend. Though daunting, the challenge is pregnant with possibilities. Some observers have argued that the Trump victory is a reaction to economic hardship, job insecurity, casualisation and an out-of-touch political elite.

But that’s only half the story. Donald Trump Loves to Insult Republicans.