Power of party leader. Party conferences. As both major parties struggle with internal divisions, it is crucial to engage with different facets of party cohesion. As both the Conservatives and Labour are confronted with ideological and organisational divisions that undermine their efficiency and jeopardise the foundations of the responsible party model, Caroline Close writes that understanding how (old and new) values, ideas and conception of democracy affect party members’ relationship to their party, within and beyond the legislative arena, is more important than ever. 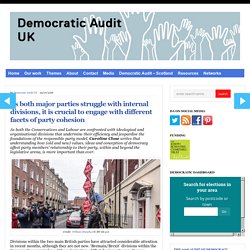 Divisions within the two main British parties have attracted considerable attention in recent months, although they are not new. Party splits and political change in the 19th century. This summer, following the internal wrangling that occurred in most parties following the Brexit referendum, we’ve been taking a look at historic cases of party division. 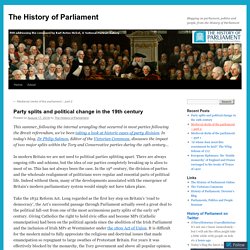 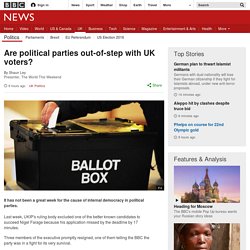 Last week, UKIP's ruling body excluded one of the better known candidates to succeed Nigel Farage because his application missed by the deadline by 17 minutes. Three members of the executive promptly resigned, one of them telling the BBC the party was in a fight for its very survival. "There is a huge amount of confusion, flux and sadly infighting," Steven Woolfe, the excluded candidate, told me, as he pinned the blame on the executive. Over at the Labour Party, the mood is, if anything, more poisonous. After its National Executive imposed a retrospective cut-off date for party members to be eligible to vote in next month's election, it was challenged in court and lost. Whatever the rights and wrongs of each case, from the outside it does not look great for those who ask us for our votes on polling day to appear to be narrowing the choice in their own internal elections.

Denial, anger, and acceptance: moving to the next phase of the British far-right. In spite of evidence of long-running and large latent support, we have been in a state of denial about the far-right in Britain, which has fed into the growth of UKIP, writes Helen Margetts. 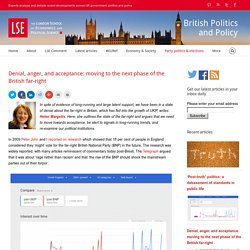 Here, she outlines the state of the far-right and argues that we need to move towards acceptance, be alert to signals in long-running trends, and re-examine our political institutions. Example UK Politics Essay: are the UK’s political parties ideologically distinct? Typically, these roles were performed under different ideological banners of each party, particularly when it came to managing the economy. 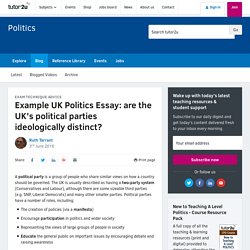 The Labour Party (or so-called “Old Labour”, in the pre-Tony Blair years) was traditionally the party of choice for the working class, and its policies for years focused on supporting trades union, reducing inequality by using strongly progressive income tax (i.e. tax that takes a greater proportion of income from the rich than the poor) combined with generous welfare payments, and providing many services through the public sector / nationalised industries (e.g. transport, water, energy etc.).

Old Labour was also associated with Keynesian-style economic policy, which encourages government spending and state involvement in the management of the economy i.e a “tax and spend” approach. Traditionally, Old Labour policies were closely aligned with socialism, although certainly not as left-wing as the Communist party. The decline of the political party: What comes after? The decline in political party membership in the UK is a recipe for a crisis of legitimacy. 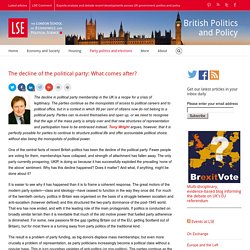 The parties continue as the monopolists of access to political careers and to political office, but in a context in which 99 per cent of citizens now do not belong to a political party. Parties can re-invent themselves and open up, or we need to recognise that the age of the mass party is simply over and that new structures of representation and participation have to be embraced instead. Tony Wright argues, however, that it is perfectly possible for parties to continue to structure political life and offer accountable political choice without also being the monopolists of political power. One of the central facts of recent British politics has been the decline of the political party.

Fewer people are voting for them, memberships have collapsed, and strength of attachment has fallen away. Syria Vote. MPs voted to approve air strikes in Syria after a 10 hour debate in the House of Commons. 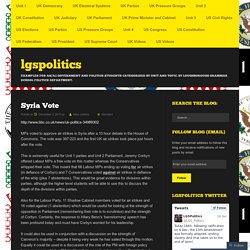 The vote was 397-223 and the first UK air strikes took place just hours after the vote. This is extremely useful for Unit 1 parties and Unit 2 Parliament. Jeremy Corbyn offered Labour MPs a free vote on this matter whereas the Conservatives whipped their vote. This meant that 66 Labour MPs ending up voting for air strikes (in defiance of Corbyn) and 7 Conservatives voted against air strikes in defiance of the whip (plus 7 abstentions). This would be great evidence for divisions within parties, although the higher level students will be able to use this to discuss the depth of the divisions within parties. We’re entering a new political era leading to a one-party state. Will Jeremy Corbyn’s time as Labour leader result in a realignment of our political parties? 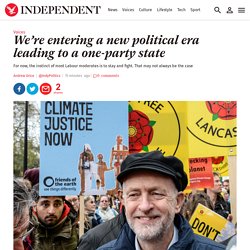 In a parallel with the last time the left was in the ascendancy, in the early 1980s, some Labour moderates are starting to wonder whether they should form a breakaway party like the SDP. “It is not a mainstream view, but people on the margins are talking about it,” said one New Labour figure. Some rich Labour businessmen who have given money to Labour will not donate another penny while Corbyn is leader. They are talking about funding centrist Labour MPs to help them fight left-wing attempts to deselect them, through an organisation that could be an embryonic new party.

Finance. Two party system? Organisation and membership. Internal democracy. Conservatives. Lib Dems. Labour. UKIP. Labour and the Tories aren’t the same - so why do voters still think they are? There is one point on which Ukip, the SNP and the Green Party agree: the problem with Labour and the Conservatives is how alike they are. 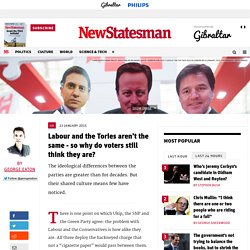 All three deploy the hackneyed charge that not a “cigarette paper” would pass between them. At times in British politics this claim has appeared plausible. Around 2006 and 2007, the ideological terrain on which Labour and the Tories fought was microscopically small. For fear of being viewed as anti-business, the former would not propose tax rises on the wealthy. For fear of being viewed as anti-state, the latter would not propose cuts in public spending (agreeing in September 2007 to match Labour’s expenditure levels for three years). It was the crash that brought this era to a close.