Internet as tools for political change 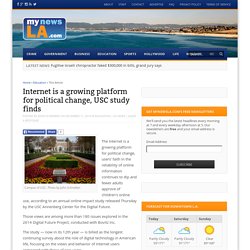 Those views are among more than 180 issues explored in the 2014 Digital Future Project, conducted with Bovitz Inc. How the Internet Has Changed the State of Political Debate  The 2008 political campaign undoubtedly changed how politicians view the importance of the Internet. 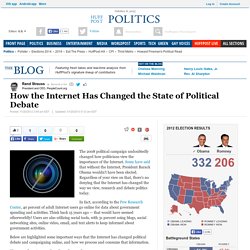 Some have said that without the Internet, President Barack Obama wouldn't have been elected. Regardless of your view on that, there's no denying that the Internet has changed the way we view, research and debate politics today. In fact, according to the Pew Research Center, 40 percent of adult Internet users go online for data about government spending and activities. Think back 15 years ago -- that would have seemed otherworldly!

Users are also utilizing social tools, with 31 percent using blogs, social networking sites, online video, email, and text alerts to keep informed about government activities. Technology supports movements. But only risk-takers make political change. Technology has always been instrumental to movements for social and political change, but recently, it’s been getting too much credit for the success of those movements. 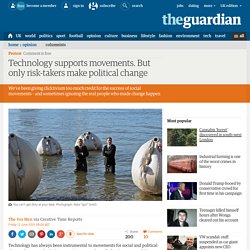 People talk about how Egypt’s revolution was due to Facebook, or how none of today’s activism (Ferguson, the Keystone XL protests, Occupy) would be successful without social media. That’s all hogwash. Hosni Mubarak had no reason to fear a website, only what people might do when they stopped looking at it; shutting down Facebook only got people into the streets that much faster. Electronic technologies can be important and useful, but they’re never revolutionary in themselves. Like engravings, the printing press or other technologies that have appeared over the centuries, electronic media do help activists get the word out. One thing that does differentiate electronic technology from past ones is the way so many people think it makes in-person action obsolete.

So why do we put so much faith in today’s new tools? Political activism is as strong as ever, but now it's digital – and passionate. Like most Americans of my generation – born in 1973 – I learned about civics from television. 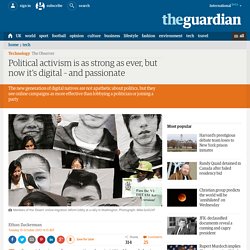 On Saturday mornings, our diet of cartoons was regularly interrupted for Schoolhouse Rock, three-minute animated musical lessons on science, grammar and the workings of government. I know that a bill can die in committee before coming to the House for a vote because I can still sing "I'm Just a Bill", an incurable earworm and a pretty thorough overview of America's federal legislative process. We don't teach civics this way anymore and that's probably a good thing. Today's Schoolhouse Rock would have to explain why part of Congress shut down the US government in a tantrum over a law they didn't like, which is hard to accomplish in three stanzas, and worse, "intransigence" doesn't rhyme with anything.

It's hard to teach civics in three-minute snippets because the way we participate in civic life is changing shape – and changing very quickly. No wonder it's hard to get our heads around it. Internet as a Driver of Political Change: Cyber-Pessimists and Cyber-Optimists. There are two schools of thought about the impact of Internet on the pro­cesses of political change. 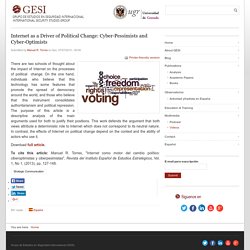 On the one hand, individuals who believe that this technology has some features that promote the spread of democracy around the world, and those who believe that this instrument conso­lidates authoritarianism and political repression. The purpose of this article is a descriptive analysis of the main arguments used for both to justify their positions. This work defends the argument that both views attribute a deterministic role to Internet which does not correspond to its neutral nature. In contrast, the effects of Internet on political change depend on the context and the ability of actors who use it. Download full article. To cite this article: Manuel R. Will the Internet Remake Politics? The Internet’s impact on politics in the 21st century seems to be unquestionable. 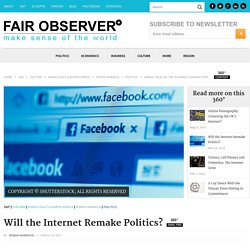 Internet technology a tool for political change in Arab world. The revolts in Tunisia, Egypt and Yemen are driven by deep dissatisfaction with authoritarian regimes, but Internet technology has played a crucial role as a 21st-century weapon for democracy movements, experts say. 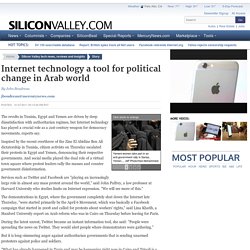 Inspired by the recent overthrow of the Zine El Abidine Ben Ali dictatorship in Tunisia, citizen activists on Thursday escalated their protests in Egypt and Yemen, denouncing their respective governments. And social media played the dual role of a virtual town square where protest leaders rally the masses and counter government disinformation.Services such as Twitter and Facebook are "playing an increasingly large role in almost any mass protest around the world," said John Palfrey, a law professor at Harvard University who studies limits on Internet expression.

"We will see more of this. " "The reason why it was so effective is because of what happened in Tunisia," she said. "They saw it on TV. On Wednesday, U.S. The Internet´s Impact on Political Parties and Campaigns, International Reports, Publications, Konrad-Adenauer-Stiftung.