Articles and other resources associated with what is called 'political correctness'.

'Essex girl' removed from dictionary following campaign. The expression “Essex girl” has been removed from a dictionary used to teach English after a campaign by women from the county who described the term as offensive. 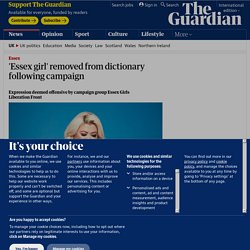 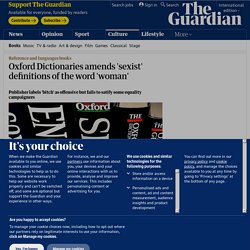 Among the updates to Oxford Dictionaries’ definitions is the acknowledgement that a woman can be “a person’s wife, girlfriend, or female lover”, rather than only a man’s. The entry for “man” has also been amended to include the same gender-neutral terminology, while many other terms relating to sexual attractiveness and activity have been revised. 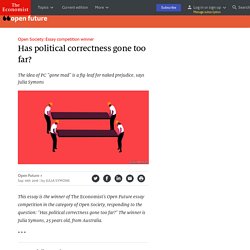 The winner is Julia Symons, 25 years old, from Australia. Get our daily newsletter. Examining negative language surrounding gender roles in society. Gender neutrality is a complex subject breaching popular culture discussions in this generation, but it can be hard to come by in America’s current social culture. 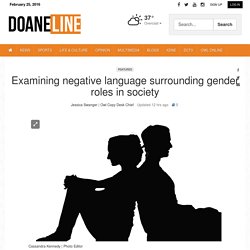 “A lot of people think that here in the United States we’ve got it all together,” psychology professor Heather Lambert said. “We think we are way above and beyond everybody else in the world.” Lambert said that when comparing different countries and how they treat women, people assume the U.S. is more advanced. But it’s not close to the top of the list when it comes to gender neutrality, according to the World Economic Forum. The question remains whether neutrality and equality are the same definition. Ve said, xe said: A guide to gender-neutral language. Photo: Luong Thai Linh, epa The college experience has started to change in small but profound ways for non-binary students — those who don’t identify strictly as female or male — as administrations push to make students across the gender spectrum feel more comfortable on campuses by adopting more inclusive language. 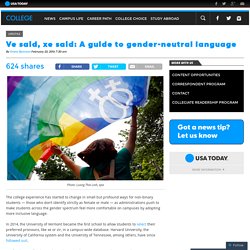 In 2014, the University of Vermont became the first school to allow students to select their preferred pronouns, like xe or zir, in a campus-wide database. Language: a feminist guide. Last week, the anthropologist Michael Oman-Reagan asked: Why does the Oxford Dictionary of English portray women as “rabid feminists” with mysterious “psyches” speaking in “shrill voices” who can’t do research or hold a PhD but can do “all the housework”? 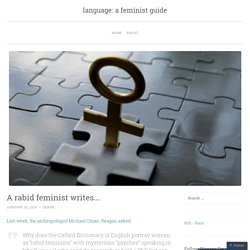 The Oxford dictionary he was talking about was the one that comes with Apple devices (Macs, i-Pads, i-Phones), and his question was about the examples that follow the definition of a word and illustrate its use in practice. Eight words that reveal the sexism at the heart of the English language. Linguists call it collocation: the likelihood of two words occurring together. 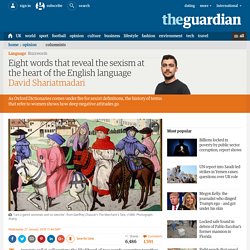 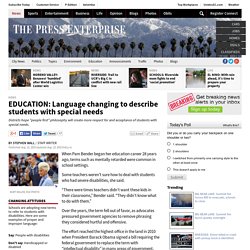 They talked about the importance of seeing special education students as more than just their disability and including them in school activities. Schools are using new language to create acceptance and respect for students with disabilities. Schools are adopting new terms to refer to students with disabilities. Here are some examples of proper and improper language: Say: People with disabilities Don't say: Handicapped or disabled Say: Cognitive disability. Political correctness, linguistic inexactitude. Martin Daly, in his column “Raining Cats and Dogs” in the Sunday Express of March 29, referred to the trite and crass tenor of our political debate. 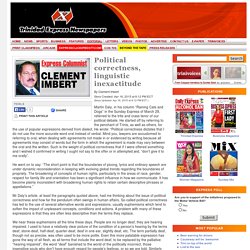 He started off by referring to the penchant of Trinis, as well as others, for the use of popular expressions derived from dialect. He wrote: “Political correctness dictates that I do not use the more accurate word oral instead of verbal. Is it time we agreed on a gender-neutral singular pronoun? Language, like life, feels easier to deal with if we arrange it into binaries: Wrong/right; Gay/straight; Labour/Conservative. 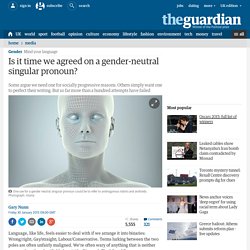 Terms lurking between the two poles are often unfairly maligned. A political correctness war that never really ended. 30 January 2015Last updated at 17:23 ET By Anthony Zurcher Editor, Echo Chambers New York magazine's Jonathan Chait took a 2x4 to the proverbial hornet's nest earlier this week when he penned a nearly 5,000-word essay under the provocative headline, "Not a very PC thing to say: How the language police are perverting liberalism". For those not familiar with the term, PC refers to politically correct - a derogatory description coined in the 1990s to label those contending, in part, that language was a weapon used by the powerful to deny the interests of the oppressed.

Although the term gained national awareness, the most ferocious debates occurred on college campuses and involved student speech codes and mandated gender inclusiveness. Political correctness: How censorship defeats itself. A cretin writing in this morning’s Telegraph doesn’t understand the meaning of ‘cretin’. Just about every writer writing about Benedict Cumberbatch in every paper yesterday failed to understand that Cumberbatch was not a racist because he had said ‘coloured’ rather than ‘person of colour’. Poor fool that he was, Cumberbatch had wanted to use his appearance on US television to complain about the lack of opportunities for black actors in Britain: ‘I think as far as coloured actors go, it gets really different in the UK, and a lot of my friends have had more opportunities here than in the UK, and that’s something that needs to change.’

After the battering he has received, I doubt if Cumberbatch will take the trouble to argue for fairer treatment for ethnic minority and working class actors again. Pursed lipped prudes, who damn others for their sexist, racist, homophobic and transphobic language, while doing nothing to confront real injustice, are characteristic figures of our time. Zoe Williams: Talking down on the underground. I don't know if I'm right in getting into a fury about this. See what you think... London Underground has produced a leaflet called Tube Tips For Women.

I read it only because I couldn't conceive of the information that would be relevant for lady travellers and not the gentlemen. As it turns out, they've produced some badges for pregnant women, saying Baby On Board, so people will give up a seat for them. That isn't offensive, though maybe it's a bit twee.

Retarded progress. Shit hit the fan for Coca-Cola in September 2013 when a woman in Alberta, Canada, opened a bottle of VitaminWater to see “YOU RETARD” printed on the cap. That cap was part of a promotional game in which English words were randomly paired with French ones, and in French retard simply (and innocuously) means late. This was the year sexist language declined and fell (and moved online) You rarely notice the moment when you finally get over a cough; one day you just think, “Oh, I haven’t been coughing for a while.” Similarly, I don’t remember when I stopped getting comments about being blonde.

Throughout my early life and teenage years, “Blondie!” Would be shouted from passing cars, or there would be a lame apology right before a dreadful “dumb blonde” joke. I’ve even been asked in the past why I don’t dye my hair, the implication that I’d be taken more seriously as a brunette. EngLangBlog: Political Correctness: theories and debates. EngLangBlog: Heart in the Right Place, Mouth Not... Being PC in this day and age. In 2011, political correctness finally went mad. Sexist language: it's every man for him or herself. The Gay Word documentary - produced by Amy Ashenden. The A-Z of political correctness. Formerly a challenging test in which the brightest 25 per cent of the population could demonstrate their aptitude for university; now, given away free with packets of breakfast cereal in order that teenagers may have their self-esteem boosted by spending three useless years studying Wind Farming and Poi Studies at a place called “uni”.

Forbidden by new health and safety regulations at Butlins resorts from bumping into one another. “The point of our dodgems is to dodge people, not run into people,” explained a spokesman. An all-embracing, new world religion that enables PC busybodies to persecute 4x4 drivers, air passengers, and anyone who dares to leave their television on standby, on the – scientifically dubious – grounds that if they don’t stop guzzling energy, All The Baby Polar Bears Will Die. In 2007, 10-year old Jordan Lyon was allowed to drown in a pond despite the presence of two Police Community Support Officers (PCSOs).