Political Philosophy. Video/Audio. MacIntyres Influence on Business Ethics 53331881. Dynamic Structure or Enduring Activity 50455850. Toward a Reassessment of Renaissance Aristotelianism. How psychology makes itself true or false. James Franklin. Brief history James Franklin is the author of The Science of Conjecture: Evidence and Probability Before Pascal, Corrupting the Youth: A History of Philosophy in Australia, What Science Knows and other books. 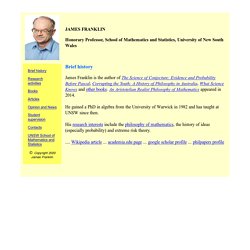 We are a school of philosophers of mathematics centred in Sydney, Australia. 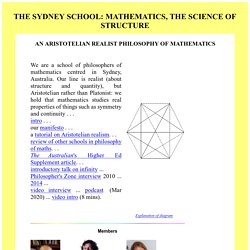 Our line is realist (about structure and quantity), but Aristotelian rather than Platonist: we hold that mathematics studies real properties of things such as symmetry and continuity . . .intro . . . our manifesto . . . a tutorial on Aristotelian realism. . .review of other schools in philosophy of maths. . .The Australian's Higher Ed Supplement article. . .introductory talk on infinity ... 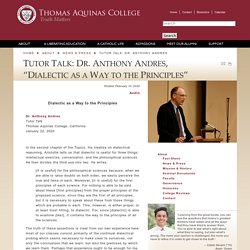 Anthony Andres Tutor Talk Thomas Aquinas College, California January 22, 2020 In the second chapter of the Topics, his treatise on dialectical reasoning, Aristotle tells us that dialectic is useful for three things: intellectual exercise, conversation, and the philosophical sciences. He then divides the third use into two. He writes: [It is useful] for the philosophical sciences because, when we are able to raise doubts on both sides, we easily perceive the true and false in each. Cross-post: the real battle lines in Renaissance philosophy – The Orthosphere. Historians of Renaissance and early modern philosophy often try to give a unity to their subjects by framing the creative elements of these periods as engaging in a revolt against “scholasticism”. 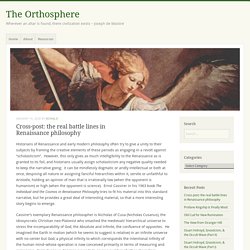 However, this only gives as much intelligibility to the Renaissance as is granted to its foil, and historians usually assign scholasticism any negative quality needed to keep the narrative going; it can be mindlessly dogmatic or aridly intellectual or both at once, despising all nature or assigning fanciful hierarchies within it, servile or unfaithful to Aristotle, holding an opinion of man that is irrationally low (when the opponent is humanism) or high (when the opponent is science).

Ernst Cassirer in his 1963 book The Individual and the Cosmos in Renaissance Philosophy tries to fit his material into this standard narrative, but he provides a great deal of interesting material, so that a more interesting story begins to emerge. Several things become clear. Like this: Like Loading... The Claims of After Virtue. Byrne on why sex is not a social construct. Recently we looked at philosopher Alex Byrne’s defense of the commonsense view that there are only two sexes.

In a new article at Arc Digital, Byrne defends another aspect of sexual common sense – the thesis that the distinction between male and female is natural, and not a mere social construct. Byrne on why sex is binary. Byrne argues that it is a mistake to suppose that one’s sex is fundamentally a matter of what chromosomes one has or even what sorts of genitals one has.

Hence it is also a mistake to point to examples such as individuals who have male chromosomes but female external genitalia, or people who have only an X chromosome or XXY chromosomes, as evidence against the thesis that sex is binary. Alasdair MacIntyre as an Aristotelian Economic Sociologist. Social Science Methodology as the Ideology of Bureaucratic Authority. The good the highest good the common good. El Bien, el Sumo Bien, y el Bien Común. Por Edmund Waldstein O.Cist. 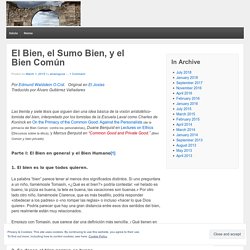 A Spanish version can be found here, and a German version here. Desire and the Good. Over at The Josias I have put up thirty-seven theses on the good. 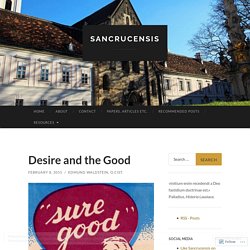 Since the good is the cause of causes, errors about it are in a way the most fundamental errors. There are three main errors about the good that I try to correct in my post. The first one has to do with the relation of goodness and desire: the error is to think that desire is not caused by the intrinsic goodness of things, but that rather things are only considered good because people happen to desire them. This seems like a small error, but has terrible consequences, it undergirds the typically modern view of the world as inert facticity upon which human desire projects ‘value,’ which therefore really refers to something in human desire and not something in the objects themselves.

Pigliucci on metaphysics. At Scientia Salon, philosopher Massimo Pigliucci admits to “always having had a troubled relationship with metaphysics.” 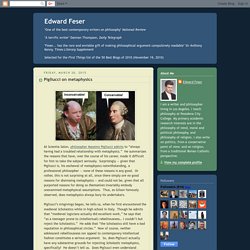 He summarizes the reasons that have, over the course of his career, made it difficult for him to take the subject seriously. Surprisingly -- given that Pigliucci is, his eschewal of metaphysics notwithstanding, a professional philosopher -- none of these reasons is any good. Or rather, this is not surprising at all, since there simply are no good reasons for dismissing metaphysics -- and could not be, given that all purported reasons for doing so themselves invariably embody unexamined metaphysical assumptions.

Thus, as Gilson famously observed, does metaphysics always bury its undertakers. Pigliucci’s misgivings began, he tells us, when he first encountered the medieval Scholastics while in high school in Italy. Gödel’s Theorem – The Orthosphere. Gödel and Einstein Kurt Gödel[1] was a Platonist,[2] logician and mathematician who developed the intention of making a profound and lasting impact on philosophical mathematics. 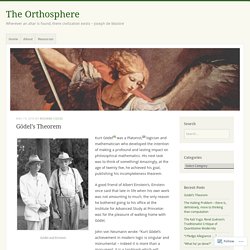 His next task was to think of something! Hume on Skepticism. David Hume (1711 – 1776) was the king of the skeptics. Many, if not most, of the modern skeptical attacks on Christianity are warmed-over versions of what David Hume said more powerfully. Here are a couple of interesting tidbits that Hume wrote that are relevant to other arguments for Christianity. In his work An Enquiry Concerning Human Understanding, Hume lays out his system of attack on religion in general and Christian claims in particular. In the midst of his skeptical work, he makes the following claim: The Cartesian doubt, therefore, were it ever possible to be attained by any human creature (as it plainly is not) would be entirely incurable; and no reasoning could ever bring us to a state of assurance and conviction upon any subject. Recent Works in Jesuit Philosophy (2014) Artificial Wisdom. April 21, 2018 at 7:37 pm (Uncategorized) Turing’s imitation game confounds the difference between servile and non-servile activities.

The machines that drill, weave, or run addition algorithms are doing the same sort of thing as the human beings who were tasked with the drudgery or swinging hammers, weaving, or computing sums, but a computer that beats grandmasters at chess isn’t doing what the grandmaster is doing. Deep Blue won by running n-possible outcomes ahead and picking the highest probability path while grandmasters win by abductive reasoning, taking risks, looking for strategies, playing the man, etc.

The grandmaster isn’t compensating for an inability to visualize n-moves ahead either – he already knows that the overwhelming number of possible are foolish or pointless. Lucas on Gödel’s proof. Kalam. February 28, 2015 at 1:30 pm (Uncategorized) It’s easy to confuse the hypothesis of the universe beginning to exist with a visualized line coming to end in a point, maybe with a helpful caption bubble that reads “universe starts here”.

But the difference between them is just what is problematic for the Kalam: the line you imagine is a determination within a homogeneous potentiality, and it is only because of its presence within it that it makes sense to give an account of why it stops or starts at one point and not another. But the universe is not obviously a determination of some homogeneous potentiality. Sure, any finite line has something behind it, which raises the question why there is no line behind the point where it starts. But what is behind a finite universe? Natural Law and the Revenge of Conscience (J. Budziszewski - Acton Institute) MacIntyre's Damascus ProvinceofSocScience. Flew on Hume on miracles.

Having looked recently at David Hume on induction and Hume on causation, let’s take a look at Hume’s famous treatment of miracles. To be more precise, let’s take a look at Hume’s argument as it is interpreted by Antony Flew in his introduction to the Open Court Classics edition of Hume’s essay Of Miracles. This being Hume, the argument is, shall we say, problematic. Hume, as Flew emphasizes, intends to make an epistemological point rather than a metaphysical one. He isn’t saying that miracles are not possible (though, of course, he doesn’t think they ever actually occur). Rather, he is saying that we can’t ever be justified in believing that a miracle has occurred. Alasdair MacIntyre as an Aristotelian Ec.

Practices, Firms and Varieties of Capitalism. The Atheist Cosmological Argument – The Orthosphere. I said the other day in passing that, “…theism is not unverifiable. Its contradiction is incoherent, so it must be true. Just why that’s so is a topic for another post.” This is that post. Take “cosmos” to mean everything whatever that is contingent – that is, i.e., not necessary. A Czech Philosopher Comes to the Defense of Truth. Consent. The human person and intuition of being. October 31, 2016 at 2:15 pm (Uncategorized) Time and causality, or scientific models are like nature. Pulling up Roots from Reality - A Review of a Cogent Analysis of the Post-Cartesian West - Community in Mission. René Descartes. Danish Ethical Demands and French Common Goods. How to use The Fallacy Files. The Fallacy Files are files on individual logical fallacies, together with some extras accessible from the Main Menu―see the navigation pane to your left.

God and Mann: Divine Simplicity and Property-Instances. Herewith, some notes on Chapter 2 of William E. The perception of monads/ substances. March 2, 2016 at 1:21 pm (Uncategorized) On J. P. Moreland's Theory of Existence. Prolegomena to the Construction of an Argument Analogous to St. Thomas's Fourth Way. 1.23.16. Incompleteness Arguments. Islam, Christianity, and liberalism again (Updated) MacIntyre's Damascus: In the Province of Social Science. Cosmological argument from time. The logic of the Problem of Universals.

Significance vs. Natural End. An Atheist Questions the Logic of Darwinism, Part 2. An Atheist Questions the Logic of Darwinism, Part 3. Siris: Usury and Titles to Interest. Confucian Four Books Index. Hume and Hopes for Moral Wisdom. Sic et Non on the Euthyphro problem. Business, Management & Accounting: Managers: Neoliberalism’s Executioners? Being a ‘Bright’ Darkens the Intellect. Breaking the Faustian Pact: The End of Thatcherism and the Promise of Blue Labour – Opinion – ABC Religion & Ethics. Schmid on Final Causation in Suárez, Part II. Schmid on Final Causation in Suárez. The Paradox of Antirealism and Butchvarov's Solution. Adding existence to something. Personal and Impersonal Uses of the First-Person Singular Pronoun. Walter Mitty atheism. Zhong Yong (Part I) Meyerson. Scientists Should Tell Lawrence Krauss to Shut Up Already.

Why can’t these guys stay on topic? Or read? The inadequacy of consent. The absolute truth about relativism. Like a Moth to the Flame. Fulford on sola scriptura, Part II. Maverick Philosopher: Continental Philosophers I Respect and the 'Continental-Analytic Divide' “Hume’s Guillotine” is a slogan of many faults - Just Thomism. A Primer of the Philosophy of Nietzsche. Maverick Philosopher: Review of Barry Miller, A Most Unlikely God. Classical Theism, Philosophy, and Religion Forum. - Boardhost Free Forums. Unintuitive metaphysics. Proving divinity. Charles De Koninck. A New and Improved Cogito Argument. Just Thomism. Introducing Bernard Lonergan’s Philosophical Proof for God.