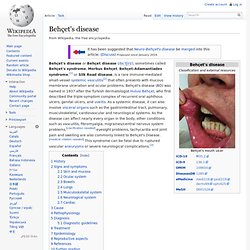 Behçet's disease (BD) was named in 1937 after the Turkish dermatologist Hulusi Behçet, who first described the triple-symptom complex of recurrent oral aphthous ulcers, genital ulcers, and uveitis. As a systemic disease, it can also involve visceral organs such as the gastrointestinal tract, pulmonary, musculoskeletal, cardiovascular and neurological systems. As the disease can affect nearly every organ in the body, other conditions such as vasculitis, fibromyalgia, migraines/central nervous system problems,[clarification needed] eyesight problems, tachycardia and joint pain and swelling are also commonly linked to Behçet's Disease.

History[edit] Signs and symptoms[edit] Skin and mucosa[edit] Bowels[edit] Behçet's disease. © 2007 Canadian Medical Association or its licensors A 27-year-old man of Middle Eastern descent presented to the hospital after waking with severely reduced visual acuity in his left eye. 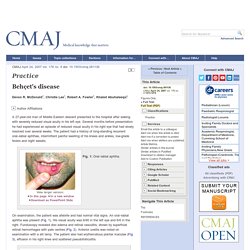 Several months before presentation he had experienced an episode of reduced visual acuity in his right eye that had slowly resolved over several weeks. The patient had a history of long-standing recurrent oral–labial aphthae, intermittent painful swelling of his knees and ankles, low-grade fevers and night sweats. Fig. 1: Oral–labial aphtha. On examination, the patient was afebrile and had normal vital signs. Fig. 2: Retinal hemorrhages with pale centres. Fig. 3: Erythematous plantar maculae. The results of blood counts and serum tests were normal. Fig. 4: Endothelial cell swelling (black arrow) and perivascular inflammatory cell infiltrate (white arrows). Study: No benefit from anticoagulant use in Behçet’s disease. Patients with vascular manifestations of Behçet’s disease who received treatment with anticoagulants did not benefit from the therapy given in addition to immunosuppressant drugs, according to results from study of practices in Turkish rheumatology clinics. 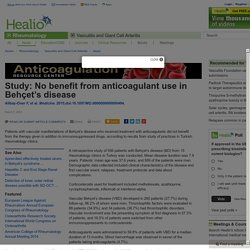 A retrospective study of 936 patients with Behçet’s disease (BD) from 15 rheumatology clinics in Turkey was conducted. Mean disease duration was 7.9 years. Patients’ mean age was 37.6 years, and 589 of the patients were men. Demographic data collected included clinical characteristics of the disease and first vascular event, relapses, treatment protocols and data about complications. The battle against Behcet's disease uveitis - National Holistic Health.

XOMA Corporation, a leader in the discovery and development of therapeutic antibodies has announced that it is now accepting enrollment for its EYEGUARD-US supplemental clinical study to assess the efficacy and safety of gevokizumab in treating Behcet's disease uveitis. 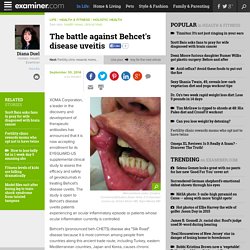 The study is open to Behcet's disease uveitis patients experiencing an ocular inflammatory episode or patients whose ocular inflammation currently is controlled. XOMA Stock Gains After Reaching Necessary Number of Events to Analyze Behcets Disease Drug Study. NEW YORK (TheStreet) -- XOMA (XOMA - Get Report) shares are up by 6.33% to $3.53 in trading on Thursday, after the drug manufacturer announced that the required number of events to analyze its Phase 3 EYEGUARD-B study of its Behcet's disease treatment candidate gevokizumab have been reached. 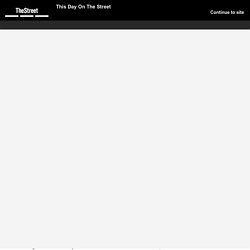 Behcet's disease causes chronic inflammation of blood vessels resulting in painful ulcers in the mouth and on the genitals and could eventually lead to blindness if left untreated. The disease is mostly found across Asia with 15,000 individuals in the U.S. also having the disease. Gevokizumab is an antibody treatment that has the potential to treat patients with a wide variety of inflammatory diseases. The treatment showed significant potential versus a placebo when used in conjunction with other treatments, according to XOMA. TheStreet Ratings team rates XOMA CORP as a Sell with a ratings score of D-. "We rate XOMA CORP (XOMA) a SELL. XOMA data by YCharts. Genetic mystery of Behcet's disease unfolds along the ancient Silk Road. NIH researchers identify new gene variants associated with risk for complex inflammatory syndrome Researchers have identified four new regions on the human genome associated with Behcet's disease, a painful and potentially dangerous condition found predominantly in people with ancestors along the Silk Road. 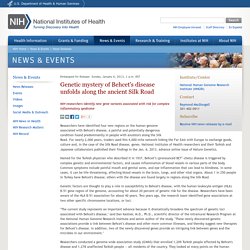 For nearly 2,000 years, traders used this 4,000-mile network linking the Far East with Europe to exchange goods, culture and, in the case of the Silk Road disease, genes. National Institutes of Health researchers and their Turkish and Japanese collaborators published their findings in the Jan. 6, 2013, advance online issue of Nature Genetics. Named for the Turkish physician who described it in 1937, Behcet’s (pronounced BET’-chets) disease is triggered by complex genetic and environmental factors, and causes inflammation of blood vessels in various parts of the body.

Common symptoms include painful mouth and genital sores, and eye inflammation that can lead to blindness. New genetic risks of Behçet's disease discovered. Researchers at the University of Michigan in collaboration with an international team of scientists have made new discoveries about Behcet’s disease, or Silk Road disease, a rare autoimmune disorder characterized by mucosal ulceration and visual loss. 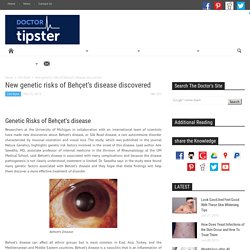 The study, which was published in the journal Nature Genetics, highlights genetic risk factors involved in the onset of this disease. Lead author Amr Sawalha, MD, associate professor of internal medicine in the Division of Rheumatology at the UM Medical School, said Behcet’s disease is associated with many complications and because the disease pathogenesis is not clearly understood, treatment is limited. Dr.