Whether it is by design or by accident, it is apparent that Morgellons Disease was man made. The reluctance of the CDC to take an active role in investigating this outbreak further suggests that, on some level, the government -- or some highly influential corporation -- is culpable.

Meanwhile people are suffering, committing suicide and spreading the disease to family members and their neighbors. There is no known cure and the disease eventually causes physical and mental disabilities.

The most affected regions are California, Texas and Florida. Despite the suggestion that victims seem to have worked with soil or gardening (and must have come in contact with Agrobacterium that way), the two major occupations of Morgellons victims are nurses and teachers. Urban areas have more cases than rural areas. There have been confirmed cases in cats, dogs and horses. By all parameters, Morgellons is already pandemic.

Yet the CDC is silent. No study, no report, no excuse. If Chemtrails And HAARP Didn’t Disturb You Enough, Wait Until You Hear About Morgellons.

Amir Alwani, Contributing WriterActivist Post For those unaware what chemtrails are, I will do my best to give you an accurate breakdown of how I found out about them and what I’ve learned since. 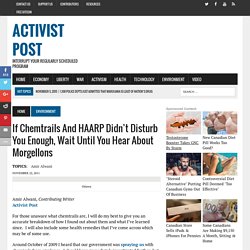 I will also include some health remedies that I’ve come across which may be of some use. Around October of 2009 I heard that our government was spraying us with chemicals from airplanes. I should have immediately investigated further, but I didn’t until many months later. Why? Eventually, what I uncovered baffled and disgusted me. A Brief Note To The Skeptics If you exhale in the winter you can see your breath because the surrounding air is cold. Tests show gargantuan levels of aluminum, barium, strontium, among other strange ingredients like red blood cells and fungus. Morgellons Disease - A Crime of Silence. For viewzone by Dan Eden [Thanks to "Kathy S. 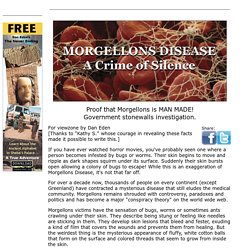 " whose courage in revealing these facts made it possible to write this.] If you have ever watched horror movies, you've probably seen one where a person becomes infested by bugs or worms. Their skin begins to move and ripple as dark shapes squirm under its surface. Suddenly their skin bursts open allowing a colony of bugs to escape! While this is an exaggeration of Morgellons Disease, it's not that far off. For over a decade now, thousands of people on every continent (except Greenland) have contracted a mysterious disease that still eludes the medical community. Morgellons victims have the sensation of bugs, worms or sometimes ants crawling under their skin. The threads or filaments are what brings most victims to their physician. "Delusional Parasitosis is a form of psychosis whose victims acquire a strong delusional belief that they are infested with parasites, whereas in reality no such parasites are present.

Morgellons Disease - A Crime of Silence. Let's summarize what we have learned about the Morgellons laboratory findings. 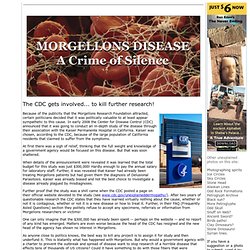 We have seen that there are fluorescent properties in some of the fibers and that these fluorescent substances contain proteins from some highly unusual and non-human organisms. It is ironic (or maybe not) that almost all of these exotic organisms have had their entire genomes studied and published. This would be essential for any serious trans-genetic manipulation. Indeed, these fluorescent proteins suggest that the organisms that produced them were genetically manipulated and tagged in some laboratory, for what purpose we do not know. The proteins come from some pretty nasty things, including organisms that make biofilms and violacein -- both which disable the human immune system, cause East Coast Fever and can insert random genes in our human cells! Whether it is by design or by accident, it is apparent that Morgellons Disease was man made. The most affected regions are California, Texas and Florida. Dr. GMO and Morgellons Disease. Since the Clinton administration made biotechnology “a strategic priority for U.S. government backing” (1), giant transnational agri-business concerns have aggressively taken over the global food chain by flooding it with Genetically Modified Organisms (GMO) without regard for the consequences to the earth or its inhabitants. 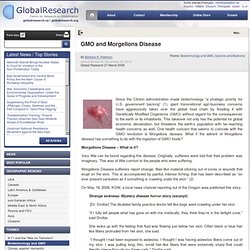 This takeover not only has the potential for global economic devastation, but threatens the earth’s population with far-reaching health concerns as well. One health concern that seems to coincide with the GMO revolution is Morgellons disease. What if the advent of Morgellons disease has something to do with the ingestion of GMO foods? Morgellons Research Group. Morgellons proven to be a real disease. (NaturalNews) Morgellons Disease is characterized by bizarre symptomology such as experiencing biting sensations on the skin, painful skin eruptions, strange fibers growing from the skin, unexplained body pain and neurological deficits (1,2). 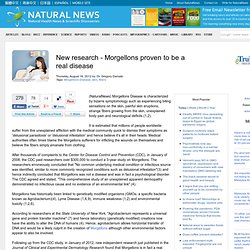 It is estimated that millions of people worldwide suffer from this unexplained affliction with the medical community quick to dismiss their symptoms as 'delusional parasitosis' or 'delusional infestation' and hence believe it's all in their heads. Medical authorities often times blame the Morgellons sufferers for inflicting the wounds on themselves and believe the fibers simply emanate from clothing. After thousands of complaints to the Center for Disease Control and Prevention (CDC), in January of 2008, the CDC paid researchers over $300,000 to conduct a 3-year study on Morgellons. . - Abnormal functioning of the follicular keratinocytes (genetic alterations in DNA caused hair follicles and skin to malfunction). Sources: 2. 3. 4. 'Dark agenda of synthetic biology 2011' Morgellons Explained.