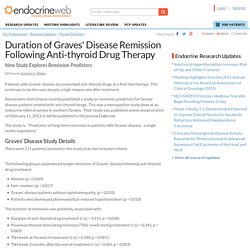 This continues to be the case, despite a high relapse rate after treatment. Researchers from Greece recently published a study on remission predictors for Graves’ disease patients treated with anti-thyroid drugs. This was a retrospective study done at an endocrine referral service in northern Greece. Their study was published online ahead of print on February 11, 2013; it will be published in the journal Endocrine. Fantastic New Research + Clinical Trials For Graves' Disease. By: Gary Rothbard, MD, MS in Graves’ Thyroid01.23.13l1 Comment Graves’ disease is an autoimmune disorder characterized by a hyperthyroid state and the accompanying signs and symptoms caused by excess thyroid hormone. 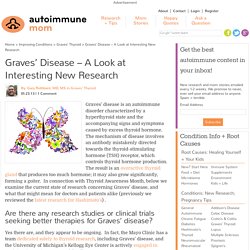 The mechanism of disease involves an antibody mistakenly directed towards the thyroid-stimulating hormone (TSH) receptor, which controls thyroid hormone production. The result is an overactive thyroid gland that produces too much hormone; it may also grow significantly, forming a goiter. In connection with Thyroid Awareness Month, below we examine the current state of research concerning Graves’ disease, and what that might mean for doctors and patients alike (previously we reviewed the latest research for Hashimoto’s) .

Are there any research studies or clinical trials seeking better therapies for Graves’ disease? Yes there are, and they appear to be ongoing. Researchers Finding New Ways to Learn About Graves' Disease. NEW findings promise to help scientists unravel several mysteries about why hundreds of thousands of Americans, including the President and Mrs. 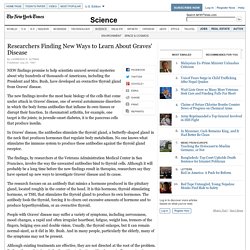 Bush, have developed an overactive thyroid gland from Graves' disease. The new findings involve the most basic biology of the cells that come under attack in Graves' disease, one of several autoimmune disorders in which the body forms antibodies that inflame its own tissues or disrupt their function. In rheumatoid arthritis, for example, one target is the joints; in juvenile-onset diabetes, it is the pancreas cells that produce insulin. In Graves' disease, the antibodies stimulate the thyroid gland, a butterfly-shaped gland in the neck that produces hormones that regulate body metabolism. No one knows what stimulates the immune system to produce these antibodies against the thyroid gland receptor.

The research focuses on an antibody that mimics a hormone produced in the pituitary gland, located roughly in the center of the head. Graves' Disease: Causes, Symptoms and Treatment. Graves' disease is an autoimmune disorder where misplaced attacks from the immune system cause the thyroid gland to become overactive. 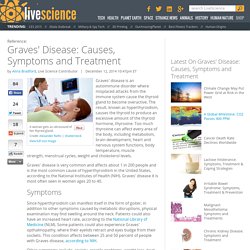 Breakthrough model holds promise for treating Graves' disease. Researchers have developed the first animal model simulating the eye complications associated with the thyroid condition Graves' disease, a breakthrough that could pave the way for better treatments, according to a recent study accepted for publication in The Endocrine Society's journal Endocrinology. 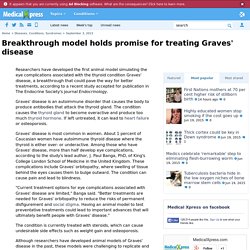 "Current treatment options for eye complications associated with Graves' disease are limited," Banga said. The condition is currently treated with steroids, which can cause undesirable side effects such as weight gain and osteoporosis. Thyroid removal is safe and effective for Graves' disease. (PhysOrg.com) -- Surgical removal of the thyroid isn't usually considered as the first option in treating Graves' disease, but a new University of Wisconsin-Madison study suggests that in experienced hands maybe it should be. 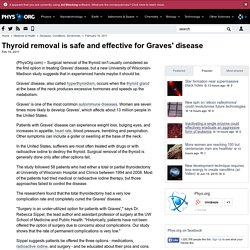 Graves' disease, also called hyperthyroidism, occurs when the thyroid gland at the base of the neck produces excessive hormones and speeds up the metabolism. Graves' is one of the most common autoimmune diseases. Women are seven times more likely to develop Graves', which affects about 13 million people in the United States. Research Links Thyroid Disease To Ethnicity. Asians, African Americans and Pacific Islanders have a higher risk of the autoimmune disorder Graves’ disease than Caucasians, according to a study. 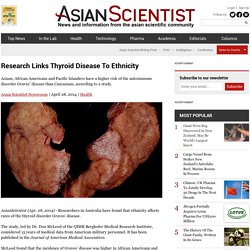 Asian Scientist Newsroom | April 28, 2014 | Health AsianScientist (Apr. 28, 2014) - Researchers in Australia have found that ethnicity affects rates of the thyroid disorder Graves’ disease. The study, led by Dr. Don McLeod of the QIMR Berghofer Medical Research Institute, considered 15 years of medical data from American military personnel. It has been published in the Journal of American Medical Association. McLeod found that the incidence of Graves’ disease was higher in African Americans and Asian/Pacific Islanders compared with Caucasians, being almost twice as common in women and more than two-and-a-half times more common in men.

“Recognizing racial differences in autoimmune thyroid disease is key to understanding why it occurs,” McLeod said. Selenium Might Help Treat Symptoms in Graves' Eye Disease. By Serena GordonHealthDay Reporter WEDNESDAY, May 18 (HealthDay News) -- The trace mineral selenium improves quality of life and slows the progression of eye problems in people with the autoimmune disorder known as Graves' disease, a new study says. 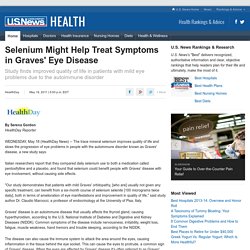 Italian researchers report that they compared daily selenium use to both a medication called pentoxifylline and a placebo, and found that selenium could benefit people with Graves' disease with eye involvement, without causing side effects. "Our study demonstrates that patients with mild Graves' orbitopathy, [who are] usually not given any specific treatment, can benefit from a six-month course of selenium selenite [100 micrograms twice daily], both in terms of amelioration of eye manifestations and improvement in quality of life," said study author Dr. Agent Orange exposure linked to Graves' disease in Vietnam veterans, study finds. Vietnam War-era veterans exposed to Agent Orange appear to have significantly more Graves' disease, a thyroid disorder, than veterans with no exposure, a new study by endocrinologists at the University at Buffalo has shown. 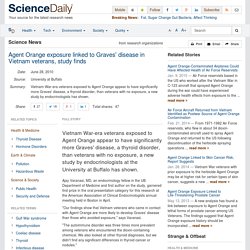 Ajay Varanasi, MD, an endocrinology fellow in the UB Department of Medicine and first author on the study, garnered first prize in the oral presentation category for this research at the American Association of Clinical Endocrinologists annual meeting held in Boston in April. "Our findings show that Vietnam veterans who came in contact with Agent Orange are more likely to develop Graves' disease than those who avoided exposure," says Varanasi. "The autoimmune disorder was three times more prevalent among veterans who encountered the dioxin-containing chemical. New research findings on Graves' disease to be highlighted at ATA meeting. Published on October 30, 2014 at 8:05 AM A unique mouse model of Graves' disease, an autoimmune disorder that causes hyperthyroidism, and new research findings that may help improve the treatment of Graves' disease will be highlighted in oral and poster presentations at the 84th Annual Meeting of the American Thyroid Association, October 29-November 2, 2014, in Coronado, California. 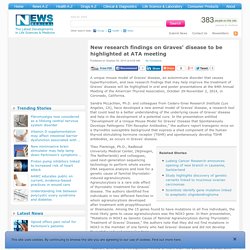 Sandra McLachlan, Ph.D. and colleagues from Cedars-Sinai Research Institute (Los Angeles, CA), have developed a new animal model of Graves' disease, a research tool that could lead to a better understanding of the underlying cause of Graves' disease and help in the development of a potential cure. Theo Plantinga, Ph.D., Radboud University Medical Center, (Nijmegen, The Netherlands) and colleagues, used next-generation sequencing technology to perform whole exome DNA sequence analysis and look for a genetic cause of familial thyrostatic-induced agranulocytosis.

Source: Graves’ Disease - Immune System Disorder - Natural Health News. What is Graves’ disease? The immune system disorder, Graves’ disease consequents the abnormal growth of thyroid hormone, a condition called hyperthyroidism. Generally, certain disorders are known to cause hyperthyroidism, though Graves’ disease tends to be a common trigger of hyperthyroidism. Graves’ disease can strike anyone, however it commonly affects women under 40 years of age. Its treatment aims to control the abnormal growth of thyroid hormones, whilst reducing the severity of its symptoms. What are the symptoms of grave’s disease? Few of its common symptoms include: Irritability or anxiety.Irregular or rapid heartbeat.Graves’ dermopathy.Slight tremor of the fingers or hands.Graves’ ophthalmopathy.Frequent bowel movements.Reduced libido or erectile dysfunction.Change in menstrual cycles.Heat sensitivity.Moist skin.Goiter.Considerable weight loss.