Out of Your Hands. Penn and Teller on Vaccinations. Interactive video: Synthetic viruses. 27 March 2013Last updated at 18:00 ET BBC medical correspondent Fergus Walsh explains how British scientists have used a new technique to develop a synthetic virus which heralds a major development in vaccines. 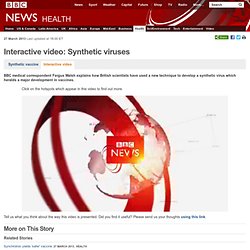 Continue reading the main story Click on the hotspots which appear in this video to find out more. This interactive content is best viewed on the desktop site. X Viruses are the most common biological unit on Earth, outnumbering all other types put together. British scientists have created a synthetic version of the foot and mouth virus. Ethnic background influences immune response to TB. Your ethnic background could influence the way in which your body fights tuberculosis. 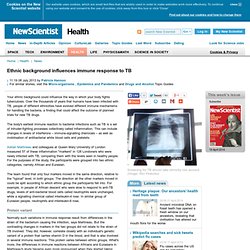 Over the thousands of years that humans have been infected with TB, people of different ethnicities have evolved different immune mechanisms for handling the bacteria, a finding that could affect the outcome of planned trials for new TB drugs. The body's earliest immune reaction to bacterial infections such as TB is a set of intruder-fighting processes collectively called inflammation.

This can include changes in levels of interferons – immune-signalling chemicals – as well as mobilisation of antibacterial white blood cells and platelets. Watching an infection take hold in 3D and in real time. 1 July 2012Last updated at 19:54 ET By James Gallagher Health and science reporter, BBC News. 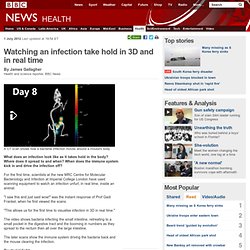 Gamifying Epidemic Prevention. Experimental drug could defeat any virus. Viruses might soon meet their kryptonite: an experimental drug that can, in theory, obliterate cells infected by any type of virus without harming healthy neighbours. 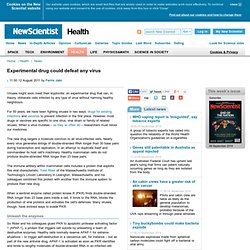 For 50 years, we have been fighting viruses in two ways: drugs for existing infections and vaccines to prevent infection in the first place. However, most drugs or vaccines are specific to one virus, viral strain or family of related viruses. When a virus mutates – as they so often do – researchers must retool our medicines. The new drug targets a molecule common to all virus-infected cells. Nearly every virus generates strings of double-stranded RNA longer than 30 base pairs during transcription and replication, in an attempt to duplicate itself and commandeer its host cell's machinery. The immune artillery within mammalian cells includes a protein that exploits this viral characteristic.

Unleash the enzymes Draconian measures Journal reference: PLoS One, DOI: 10.1371/journal.pone.0022572. Superfast drugs target shape-shifting enzymes. It all happens in a femtosecond – a quadrillionth of a second. 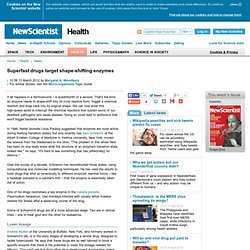 That's the time an enzyme needs to shape-shift into its most reactive form, trigger a chemical reaction and snap back into its original shape. We can now enter this high-speed world to interrupt the chemical reactions that sustain some of our deadliest pathogens and cause disease. Doing so could lead to antibiotics that won't trigger bacterial resistance. Bacteria defeat antibiotics they have never met before. BACTERIA that resist antibiotics are a growing problem worldwide, but one we thought we could limit or even reverse by better control of the drugs. 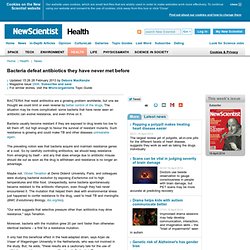 The situation may be more complicated: some bacteria that have never seen an antibiotic can evolve resistance, and even thrive on it. Bacteria usually become resistant if they are exposed to drug levels too low to kill them off, but high enough to favour the survival of resistant mutants. Blame bacteria if you start putting on weight - health - 19 December 2012. WEIGHT gain bugging you? 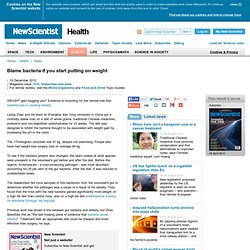 Evidence is mounting for the central role that bacteria play in causing obesity. Liping Zhao and his team at Shanghai Jiao Tong University in China put a morbidly obese man on a diet of whole grains, traditional Chinese medicines, probiotics and non-digestible carbohydrates for 23 weeks. The diet was designed to inhibit the bacteria thought to be associated with weight gain by increasing the pH in the colon.

The 175-kilogram volunteer lost 51 kg, despite not exercising. People who have had weight-loss surgery lose on average 49 kg. Viewpoint: How do our bacteria help us? 19 October 2011Last updated at 10:08 The bacteria that live in and on us might be responsible for whether we are healthy or unhealthy, and even whether we are fat or thin, writes Ed Yong. 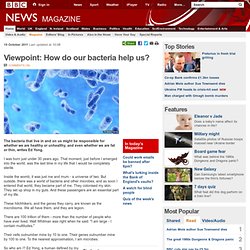 I was born just under 30 years ago. That moment, just before I emerged into the world, was the last time in my life that I would be completely sterile. Inside the womb, it was just me and mum - a universe of two. Fat is a beautiful organ. Pollution cuts improve heart health - Beijing study. 15 May 2012Last updated at 19:31 ET By Emily Selvadurai Health reporter, BBC News Pollution remains a problem in Beijing Cutting air pollution has an instant impact on heart health, experts believe, after reviewing studies of the 2008 Beijing Olympics. 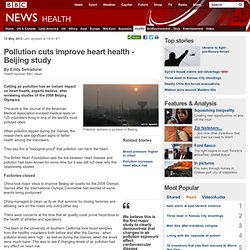 The work in the Journal of the American Medical Association involved medical tests on 125 volunteers living in one of the world's most polluted cities. When pollution dipped during the Games, the researchers saw significant signs of better health among the volunteers. They say this is "biological proof" that pollution can harm the heart. The British Heart Foundation said the link between heart disease and pollution had been known for some time but it was still not clear why this relationship existed.

Factories closed China took major steps to improve Beijing air quality for the 2008 Olympic Games after the International Olympic Committee had warned of some events being postponed.