Bread and Other Edible Agents of Mental Disease. Another Vaccine “Bombshell” Glyphosate – Think Monsanto’s Roundup – Confirmed In Most Vaccines. Research scientist Anthony Samsel has confirmed that glyphosate, a key active chemical in Monsanto’s herbicide Roundup®, has been found in most vaccines! 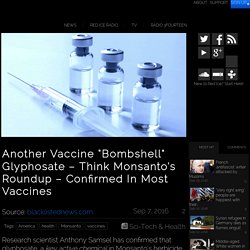 In this video, we hear Dr Samsel reciting his findings. Additionally, Dr Samsel sent a letter to his Congressional Senator from New Hampshire wherein he gives Senator Shaheen permission to share his laboratory data on glyphosate-contaminated vaccines with “all members of Congress and the public.” Will she have the presence of conscience to do what U.S. Congressman Bill Posey of Florida did when, in July of 2015, he went before Congress to ask for a congressional investigation into the science, fraud and collusion regarding the MMR vaccine—Autism connection found in African-American boys under three years of age, as exposed in 2014 by CDC epidemiologist William Thompson, PhD, one of the co-authors of the CDC report which eliminated that pertinent data and documentation from the CDC’s published information? Under Our Skin Part 2 Film Reveals Hope for Lyme Sufferers. 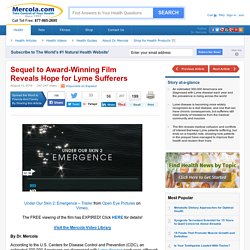 Mercola According to the U.S. Centers for Disease Control and Prevention (CDC), an estimated 300,000 Americans are diagnosed with Lyme disease each year, although some data suggest it may actually be over 440,000.1,2 While exact numbers are difficult to ascertain, what is known is that the prevalence is rising. Since national surveillance began in 1982, the number of annual Lyme cases reported has increased nearly 25-fold. The disease is also creeping out geographically.3,4 Between 1993 and 1997, 43 U.S. counties had a high incidence of Lyme disease.

Today, Lyme disease is becoming more widely recognized as an actual disease, but sufferers still meet plenty of resistance from the medical community and insurers. Under Our Skin "Under Our Skin" had a tremendous impact, raising awareness among patients, doctors and health authorities alike. However, despite progress Lyme patients still face an uphill battle. Autism severity linked to genetics, ultrasound, data analysis finds. For children with autism and a class of genetic disorders, exposure to diagnostic ultrasound in the first trimester of pregnancy is linked to increased autism severity, according to a study by researchers at UW Medicine, UW Bothell and Seattle Children's Research Institute. 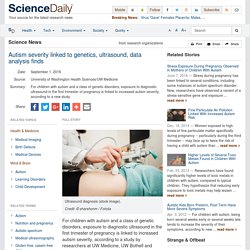 The study published Sept. 1 in Autism Research studied the variability of symptoms among kids with autism, not what causes autism. What they found is that exposure to diagnostic ultrasound in the first trimester is linked to increased autism symptom severity. The greatest link is among kids with certain genetic variations associated with autism; 7 percent of the children in the study had those variations. FDA guidelines currently recommend that diagnostic ultrasound only be used for medical necessity. Mourad said their results are about the first trimester of pregnancy. The researchers used data from the Simons Simplex Collection autism genetic repository funded by the Simons Foundation Autism Research Initiative. Cancer-fighting properties of horseradish revealed. Horseradish contains cancer-fighting compounds known as glucosinolates. 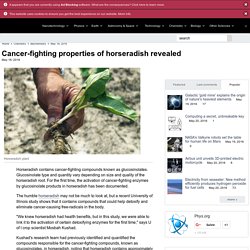 Glucosinolate type and quantity vary depending on size and quality of the horseradish root. For the first time, the activation of cancer-fighting enzymes by glucosinolate products in horseradish has been documented. The humble horseradish may not be much to look at, but a recent University of Illinois study shows that it contains compounds that could help detoxify and eliminate cancer-causing free-radicals in the body. "We knew horseradish had health benefits, but in this study, we were able to link it to the activation of certain detoxifying enzymes for the first time," says U of I crop scientist Mosbah Kushad. Kushad's research team had previously identified and quantified the compounds responsible for the cancer-fighting compounds, known as glucosinolates, in horseradish, noting that horseradish contains approximately 10 times more glucosinolates than its superfood cousin, broccoli.

IBM May Have Just Found How To End Viral Infection. Yes, All of Them. [DIGEST: Popular Science, RD Mag] Researchers at IBM and the Institute of Bioengineering and Nanotechnology (IBN) in Singapore have created a macromolecule––one giant molecule made of smaller subunits––that might treat multiple types of viruses and prevent infection. 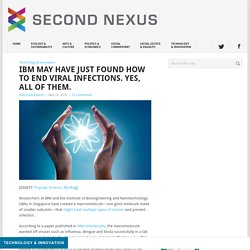 According to a paper published in Macromolecules, the macromolecule warded off viruses such as influenza, dengue and Ebola successfully in a lab environment. Importantly, the macromolecule remained effective even after the viruses mutated. Researchers plan to test the Zika virus next, and they believe its similarities to a form of dengue already tested will result in yet another successful trial.

The Influenza virus. The macromolecule attacks viruses in a novel way. Because the majority of viruses are well adapted to their host organism, virus structures often vary considerably. To read more, continue to page 2. About The Author Alan.