4gifs.tumblr-21.gif (400×300) Www.pharmainfo.net/files/groupsimages/differences_between_zero_and_first_order_kinetics.pdf. Cytochrome P450. A discussion about a pharmacology concept known as the volume of distribution. Kidney International - Figure 2 for article: The T cell as a bridge between innate and adaptive immune systems: Implications for the kidney. Adaptive immunity. 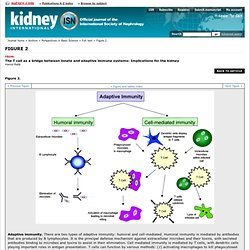 There are two types of adaptive immunity: humoral and cell-mediated. Humoral immunity is mediated by antibodies that are produced by B lymphocytes. It is the principal defense mechanism against extracellular microbes and their toxins, with secreted antibodies binding to microbes and toxins to assist in their elimination. Cell mediated immunity is mediated by T cells, with dendritic cells playing important roles in antigen presentation. Www.microrao.com/micronotes/pg/humoral_immunity.pdf. A quick summary of the 6 types of necrosis. Q. 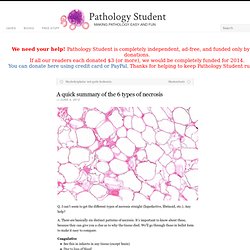 I can’t seem to get the different types of necrosis straight (liquefactive, fibrinoid, etc.). Any help? A. There are basically six distinct patterns of necrosis. It’s important to know about these, because they can give you a clue as to why the tissue died. Example: Plasma Cell. VM8054 Veterinary Histology Author: Dr. 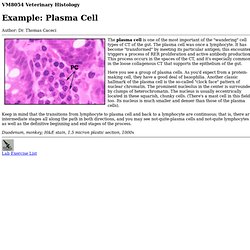 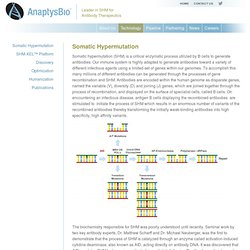 Our immune system is highly adapted to generate antibodies toward a variety of different infectious agents using a limited set of genes within our genomes. To accomplish this many millions of different antibodies can be generated through the processes of gene recombination and SHM. Antibodies are encoded within the human genome as disparate genes, named the variable (V), diversity (D) and joining (J) genes, which are joined together through the process of recombination, and displayed on the surface of specialist cells, called B cells. On encountering an infectious disease, antigen B cells displaying the recombined antibodies are stimulated to initiate the process of SHM which results in an enormous number of variants of the recombined antibodies thereby transforming the initially weak-binding antibodies into high specificity, high affinity variants.

Basic Immunology: Functions and Disorders of the… Immunology Lecture 11 Part 9 (class switching) Genetics of Immunoglobulin Diversity. Antibody affinity maturation. MHC I. MHC II. Innate or non-specific immunity. We are constantly being exposed to infectious agents and yet, in most cases, we are able to resist these infections. 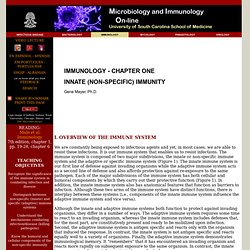 Each of the major subdivisions of the immune system has both cellular and humoral components by which they carry out their protective function (Figure 1). In addition, the innate immune system also has anatomical features that function as barriers to infection. Although the innate and adaptive immune systems both function to protect against invading organisms, they differ in a number of ways. Acute Inflammation. During an immune response, often a set of processes occur that create a condition known as inflammation. 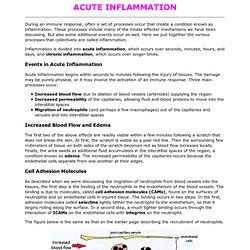 These processes include many of the innate effector mechanisms we have been discussing. But also some additional events occur as well. Here we pull together the various processes that collectively are called inflammation. Inflammation is divided into acute inflammation, which occurs over seconds, minutes, hours, and days, and chronic inflammation, which occurs over longer times. Events in Acute Inflammation Acute inflammation begins within seconds to minutes following the injury of tissues. Increased blood flow due to dilation of blood vessels (arterioles) supplying the region Increased permeability of the capillaries, allowing fluid and blood proteins to move into the interstitial spaces Migration of neutrophils (and perhaps a few macrophages) out of the capillaries and venules and into interstitial spaces Increased Blood Flow and Edema Cell Adhesion Molecules Chemotaxis.

Cune3.tripod.com/pathology/underwood/under03.pdf. Angiogenesis. Ocular Pathology: What is pleomorphic adenoma? MIXED TUMOR OF THE LACRIMAL GLAND (Pleomorphic Adenoma)Definition: benign primary lacrimal gland neoplasm composed of both stromal and epithelial components.Incidence/Prevalence: the most common primary neoplasm of the lacrimal gland accounting for about 40-50% of neoplasms in some series.Etiology: The tumors presumably arise from ductular epithelium based on the ultrastructural characteristics that recapitulate the lacrimal ducts. 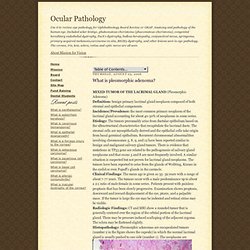 The stromal cells are myoepithelially derived and the epithelial cells take origin from basal germinal epithelium. Recurrent chromosomal abnormalities involving chromosomes 3, 8, 9, and 12 have been reported similar to benign and malignant salivary gland tumors. There is evidence that mutations in TP53 gene are related to the pathogenesis of salivary gland neoplasms and that exons 5 and 8 are most frequently involved. E. coli Bacteria Infection Symptoms, Causes, Treatments. E. coli (Escherichia coli) is the name of a germ, or bacterium, that lives in the digestive tracts. 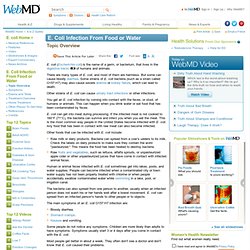 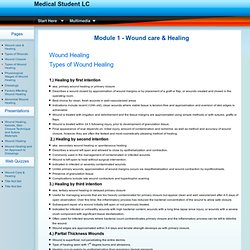 Healing by first intention aka. primary wound healing or primary closure Describes a wound closed by approximation of wound margins or by placement of a graft or flap, or wounds created and closed in the operating room. Best choice for clean, fresh wounds in well-vascularized areas Indications include recent (<24h old), clean wounds where viable tissue is tension-free and approximation and eversion of skin edges is achievable. 2.) The Complement System. Overview Sometimes the interaction of antibodies with antigen is useful by itself. 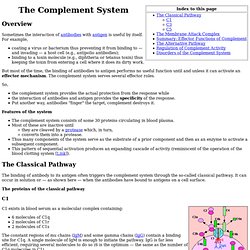 For example, coating a virus or bacterium thus preventing it from binding to — and invading — a host cell (e.g., antipolio antibodies); binding to a toxin molecule (e.g., diphtheria or tetanus toxin) thus keeping the toxin from entering a cell where it does its dirty work. But most of the time, the binding of antibodies to antigen performs no useful function until and unless it can activate an effector mechanism. Surgical Site Infections. Your skin is a natural barrier against infection, so any surgery that causes a break in the skin can lead to a postoperative infection. Doctors call these infections surgical site infections (SSIs) because they occur on the part of the body where the surgery took place. If you have surgery, the chances of developing an SSI are about 1 to 3 percent.